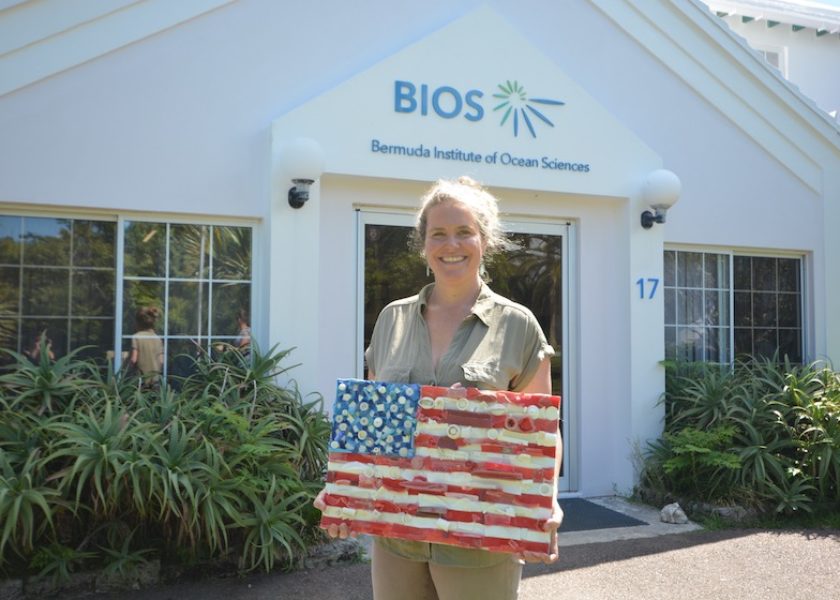 This summer, BIOS’s Marine Science Internship (MSI) program, part of the Institute’s larger Ocean Academy, brought art into its primarily science-focused curriculum. The two-week program is designed to provide students ages 14 to 16 with training and skills development in scientific research and science diving. However, over the last several years, a growing number of educators have started incorporating art into the traditional fields of science, technology, engineering, and math (STEM). This new concept is known as STEAM, with the “A” representing “art” in the form of humanities, language arts, dance, drama, visual arts, design, and music.

“Bringing art into the classroom allows students to explore scientific questions through a lens of creativity,” said Kaitlin Noyes, director of Ocean Academy. “This type of cross-curricular activity promotes discussion, collaboration, discovery, and a deeper understanding of the issue being investigated.”

During the second week of the intensive program, MSI students spent a morning learning about marine debris: where is comes from, what its environmental impacts are, and what can be done to prevent trash from entering the marine ecosystem in the first place. Following this, they had the opportunity to hear from Meredith Andrews, a Bermuda-based portrait, lifestyle and travel photographer who—in recent years—has begun turning her lens on marine debris.

Five years ago, Andrews returned to Bermuda after living in Europe and found herself picking up plastic trash during her daily walks along the beach. Instead of throwing it away, she began collecting it. “I’m really interested in things you can recognize because then you begin to associate yourself with it,” she said. Eventually, she began making collages out of these discarded plastic items, turning beach trash into patterns, color gradients, and even Adventgram – a digital advent calendar, created from plastic pollution, that she released on Instagram in 2018 in the days leading up to Christmas.

There’s no shortage of material for her to work with. Bottle caps are the most common single item she finds on the beach, but her mini beach cleanups have uncovered glow sticks, lighters, footwear, combs, toothbrushes, plastic toys, printer cartridges, pen caps, and paintbrushes, among other things. She ends up throwing away 20-30% of what she finds, including rope and soft plastic, but the rest gets taken home, washed, and sorted into bins by color.

“I see my art as a way of taking an environmental problem and making something beautiful out of it,” Andrews said. “I’m not an authority on the topic, but art can be used to get people’s attention and then, once you have it, you can use science to educate them about the full extent of the problem.”

Her largest art installation to date is an 8-foot by 4-foot (2.5 meters by 1.2 meters) collage commissioned by the Bermuda Tourism Authority for display in their Visitor’s Center in Hamilton. For Andrews, this piece is a perfect example of how art intersects with other areas, including science and commerce.

In fact, Andrews herself is a living example of this. Her father is a physicist and her husband, mother, and both of her sisters have worked in the arts, “I’ve always been a little intimidated by science, but art and science are more closely linked than we realize,” she said. “Some of the finest painters are very mathematical or have studied anatomy and, for many scientists, art is an outlet to express their knowledge or understanding.”

After hearing from Andrews, the MSI students took a trip to the shores of Castle Harbor to conduct their own mini beach cleanup. Among the items collected were multiple plastic gas and oil containers, rope, pieces of a Styrofoam surf board, a paint bucket, food wrappers, a packing crate, and a broken cooler. They also kept their eyes out for pieces of purple plastic, as well as less-degraded, but still recognizable, items—like toothbrushes—that Andrews mentioned are particularly needed for her artwork.

Later in the week, students learned about the politics of marine debris and plastics pollution from Chris Flook. Currently, Flook is the small boats and docks supervisor at BIOS, but he previously spent 16 years as the collector of marine specimens for the Bermuda Aquarium, Museum, and Zoo, and has been heavily involved with local marine protection and management initiatives. This background gives him a unique perspective on the threats to the island’s marine environment, as well as the challenges of managing human activities on and around it.

“It’s inspiring to see the next generation of scientists and policy makers immersing themselves in this program and challenging themselves to tackle some of the issues threatening our ocean,” Flook said.

To see more of Andrews’ artwork, please visit her on Instagram at @meredithphoto.