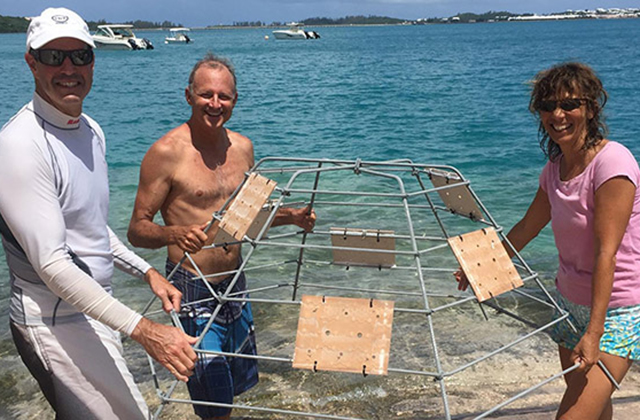 Samia Sarkis (right, executive director of the Living Reefs Foundation and adjunct BIOS faculty member), Michael Heslop (center, Living Reefs Foundation Board of Directors) and Miles Stephens (left, volunteer) display a coral frame prior to installation. This first frame, sponsored by 11th Hour Racing, was secured to the seabed in Castle Harbour and “planted” with juvenile corals that were attached to the frame using a special underwater cement. Photo credit: E. Blackmore.

How Does This Garden Grow in Bermuda? Under the Sea!

When Samia Sarkis dreamed of planting gardens on Bermuda, she didn’t envision blooming flowers for picking or rows of lettuce for eating, but instead vast beds of undersea corals.

Sarkis, adjunct faculty at BIOS and executive director of the island-based Living Reefs Foundation, spearheaded the project two years ago and “planted” her first garden this summer, in a project known as the Coral Garden Initiative. The initial garden was supported by 11th Hour Racing—exclusive Sustainability Partner of the America’s Cup Land Rover Ben Ainslie Racing Team—and private donors have similarly adopted subsequent gardens. The Living Reef Foundation is partnering with Rosewood Tucker’s Point Resort on the Coral Garden Initiative, including plans to develop an ecotourism-friendly snorkel trail near the resort.

Building on existing coral garden initiatives in places like Florida and Hawaii that have shown positive results for coral growth, Sarkis and her colleagues designed dome-shaped metal frames they secured to the ocean floor and “seeded” with juvenile corals (affixed to the frame with epoxy).

“These are a good starting point, however, in the next few years it is our intent to investigate other potential ‘garden bases’ that may prove more sustainable for Bermuda,” Sarkis said.

Each frame has two goals. First, it serves as a foundation for vulnerable young corals to grow and reproduce, a process that over time will expand coral cover. Second, the frame will increase the number and size of nooks and crannies on the reef (a measure called spatial heterogeneity), in which marine organisms can live.

Researchers hope the gardens, positioned in optimal areas for protection, sunlight, and nutrients, will support populations of fish and invertebrates. The combination of reef conservation and tourism engagement/education project will also allow scientists to investigate coral culture techniques while providing the public with a window into the importance of coral reefs and efforts aimed at improving reef condition.

A recent photo of the coral garden frame shows the numerous juvenile corals that have been attached to the frame over the past few months. Photo credit: Sam dePuton.

BIOS coral reef scientist Samantha de Putron is collecting, culturing, and settling juvenile corals for various coral physiology experiments of her own. In an ideal partnership, de Putron will take her juvenile corals at the end of the experimental period—usually after six months—and attach them to Sarkis’ frames, where the hope is the corals will continue to grow, thrive and, eventually, reproduce on their own.

“This is great for science as well as tourism and education,” de Putron said. “The initiative includes an ‘adopt-a-coral program’ that will allow people to watch the corals grow over time.” This may also be a mechanism for long-term funding, she said.

BIOS educators also plan to use the coral frames as a tool for students in its Ocean Academy program to see during field trips, as well as a potential study site for older Marine Science Internship students.

BIOS intern Phoebe Barboza is currently working with scientists from both organizations to develop a reef health index for the coral garden site and comparison sites in Bermuda, using the Living Reef Foundation frames as a baseline. Barboza, a third-year student with the Institute’s Bermuda Program, plans to use this research for her graduate study at the University of Southampton during the next two years. Her goal is to develop a numbered system—based on factors such as coral cover and fish populations—that can be used to indicate coral growth and health in the gardens.

“Globally there are coral reef health indices that apply to various areas,” Barboza said. “We plan to adapt these in order to assess how well the coral gardens perform.”

Barboza hopes to develop an easily understandable and measurable way to learn if a coral garden reef site is healthy, then rate its health on a scale that compares it to natural reefs around Bermuda. This information will build on the initial database, developed by Bermuda marine scientist and consultant Thad Murdoch, The research could also be of use to the Bermuda government to better inform decision-makers about conservation strategies for the island’s broader coral reef system.

At the Living Reefs Foundation, Sarkis hopes that, in the long term, the coral garden initiative will serve not only to boost coral reef diversity in damaged reef areas, but also to provide recipient sites for corals removed during coastal development projects.

“In this way, it will address a range of coral conservation needs,” she said.