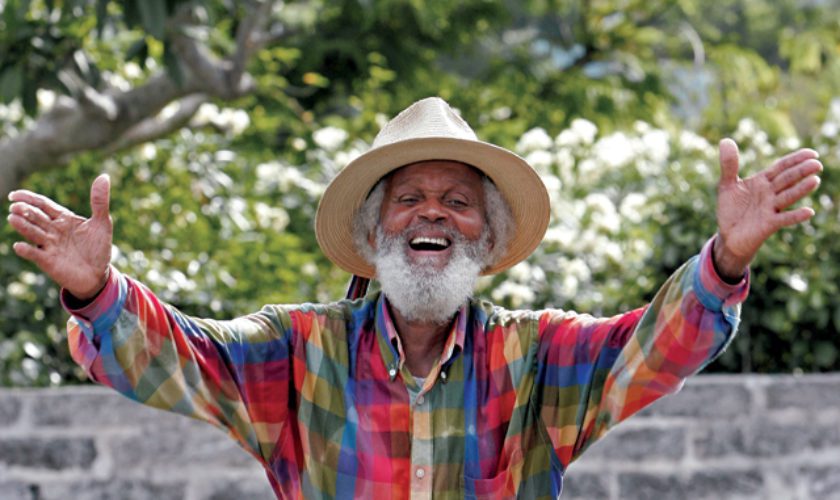 Johnny Barnes is Welcoming Students at Guelph University, and Nobody Really Knows Why

On the front lawn of Guelph University in Ontario, Canada, students are being greeted by Bermuda’s most famous of greeters: Johnny Barnes.

Mr Happy himself hasn’t migrated to the Great White North — fear not — rather, an exact replica of his statue has, the one that now stands on East Broadway.

And how exactly he got there is somewhat of a mystery. But the statue was spotted and immdiately recognized by long –time Canadian friend and frequent visitor to Bermuda.

The university came into possession of the statue back in November, 2015, after residing on an unknown private property in nearby Caledon. It caught the eye of Guelph’s principal, Julie Pendergast, who asked the family if they would donate the statue to the school, which they “graciously accepted.”

So why on earth is a statue of Johnny Barnes standing on the front lawn of a Canadian university?

“Johnny has a real welcoming posture and that’s kind of how we see ourselves — open to every type of student from wherever,” Guelph CVI guidance counsellor Frank Tersigni told the Guelph Mercury, a local paper.

“Although Johnny Barnes is not a graduate of GCVI, or a resident of Guelph or Canada for that matter, he does represent the welcoming spirit that we pride ourselves on,” Ms Prendergast wrote in a school newsletter.

“In addition, Johnny Barnes represents diversity. This aligns with and complements our beliefs as a school. [He] connects with our goal to become an International Baccalaureate World School. GCVI strives to embed international-mindedness, including global awareness and respect for diversity, into the collective school culture.”

While the reasoning may be a bit flimsy, Mr Happy’s effect has been pronounced. Students are all too happy to take selfies with Mr Barnes’ bronze visage, according to Mr Tersigni.

It seems the open arms of love, even if they belong to a statue, is a gesture that resonates across both cultures and ponds.