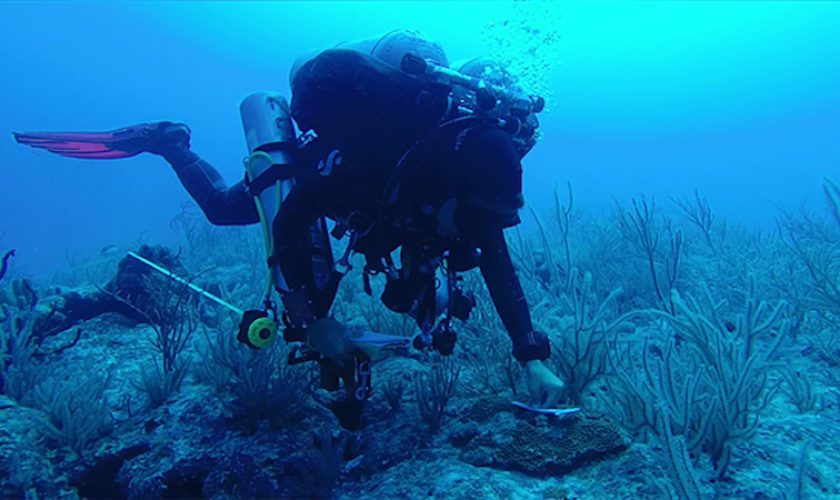 Kids these Days: A Toast to Moms Everywhere, Even in the Ocean

Pictured above: BIOS coral reef ecologist Gretchen Goodbody-Gringley conducts research on one of Bermuda’s mesophotic reefs, found at depths from 100 feet (30 meters) to over 490 feet (149 meters)

A recent study sheds light on how environmental conditions experienced by parent coral colonies influence their offspring’s survival and resilience.

People know that the health of a mother, and the environment in which she lives, influences the health of her baby. Still, it may come as a bit of a surprise that a similar relationship holds true with one of the ocean’s oldest inhabitants: corals.

A new study, published in February in the journal Coral Reefs, investigates the relationship between the environmental conditions—such as water depth, light availability, and temperature fluctuations— experienced by parent colonies of mustard hill coral (Porites astreoides) and the growth of their offspring.

“Brooding corals are ideal models for studying the effects of habitat type on early life history,” said Gretchen Goodbody-Gringley, a BIOS reef ecologist and lead author on the paper. Unlike broadcast spawning corals, which reproduce through coordinated mass releases of eggs and sperm into the water, brooding corals have internal fertilization and egg development within the parent colony. As a result, both the external environment and the parental history impact the conditions experienced by the larvae throughout their development.

The team of researchers, led by Goodbody-Gringley and BIOS colleague Samantha de Putron, a coral ecologist and marine biologist, studied corals from three different study sites on the Bermuda platform: a shallow depth patch reef off Bailey’s Bay (6.5 to 16 feet, or 2 to 5 meters), a moderate-depth rim reef at Hog Reef (26 to 32 feet, or 8 to 10 meters), and an upper-mesophotic reef at Hog Terrace (98 to 109 feet, or 30 to 33 meters).

In Bermuda, mustard hill corals release larvae on a predictable schedule around the new moons during the months of July, August, and September. Just prior to these releases, the team collected 35 adult colonies from the three study sites and brought them back to outdoor laboratories at BIOS, where larvae were collected, transferred to separate study tanks, and counted.

Researchers measured the adult colonies and larvae daily to assess parental health and larval growth. For the adult colonies, they measured total surface area and the total number of larvae released, also called fecundity. For the larvae, they measured larval size, the density of symbiotic dinoflagellates (called Symbodinium, responsible for helping to supply energy to the coral through photosynthesis) within the larval tissues, larval settlement success, and survival of the new recruits over several weeks .

These differences suggest there is a gradient of reproductive success and larval fitness, with the lowest at the patch reef site and the highest at the upper mesophotic site.

“We didn’t expect the mesophotic corals to perform better than those from other sites,” Goodbody-Gringley said. “This is exciting because it shows that mesophotic reefs may serve as important sources of resilience for Bermuda’s coral reef ecosystem.”