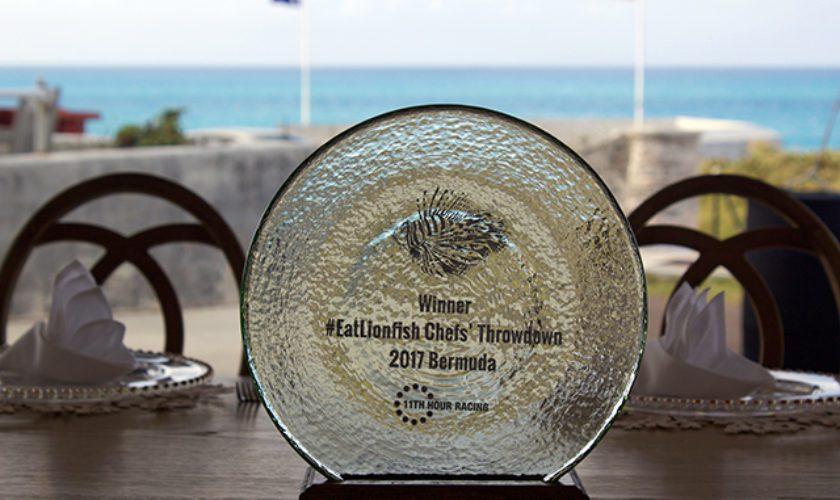 This Wednesday, on the back lawn of the Commissioner’s House in Dockyard, a single lionfish was forced to watch in terror as humans gathered from across the world to feast on his family. The reason for this sadistic celebration? The successful launch of a killer robot designed to wipe out his entire species.

Reports of the human’s newest invention in their quest towards lionfish genocide have been circulating around the reef for weeks, but like many of his kind, the lionfish on the Commissioner’s House lawn dismissed the talk as typical reef gossip. Until now.

Its creators refer to it as the “Guardian LF1”, but resident lionfish know it simply as ‘The Terminator.’ And it’s successful deployment has been announced across the world.

The Terminator works by positioning two electrodes on either side of the lionfish, electrocuting them, then sucking its unconscious corpse into a holding tank. But even more terrifying is it’s reach – the Terminator can operate at depths up to 400 meters, reaching the safe havens lionfish once counted on to avoid human tyranny.

“A part of me did want sharks with frickin’ lazer-beams,” joked a leading member of Bermuda’s lionfish death squads, Chris Flook, unbothered by his own depravity.

Despite the grotesque display of this murder machine, the night featured all the propagandistic hallmarks of these increasingly common and sadistic events (“You’ve got to eat them to…?” a man with a hands-free microphone called out to the audience, his fist raised in the air. “Beat them!” the audience cheered in bone-chilling reply.)

This ritual was slightly different though, the lionfish on the Commissioner’s House lawn would soon learn. Celebrity chefs had been flown in to prepare this monstrous feast. There were politicians and athletes and professional film crews, and they all watched on in glee as the man with the hands-free microphone described every detail of the massacre.

But all is not lost for the lionfish in these waters. Only five individuals have lionfish culling permission in Bermuda, and out of the 115 pounds of lionfish served on Wednesday night, only 40 pounds of it was caught locally.

“In order to provide enough for the 200 guests at the event, we had to purchase and fly about 75 pounds in from Florida, where lionfish are much easier to catch and a lot of commercial fishermen sell them,” said Alessandra Ghezzi, Director of Communications for 11th Hour Racing.

“By working with local cullers in Bermuda and increasing demand by promoting the fish as a sustainable choice, we are hoping that there will be an improvement in the issues with supply and demand.”

The hope for lionfish is that this doesn’t change anytime soon. As of right now, their species remains unpopular as a meal for locals, few restaurants serve lionfish and, as a result, few commercial fishermen hunt them. And though it is scary, The Terminator is expensive and doesn’t yet represent a truly existential threat to lionfishkind.

The lionfish on the lawn, despite the horror, could take solace in that knowledge.  For him, Wednesday night was a but small step in an escalating war, the outcome of which is yet to be determined.