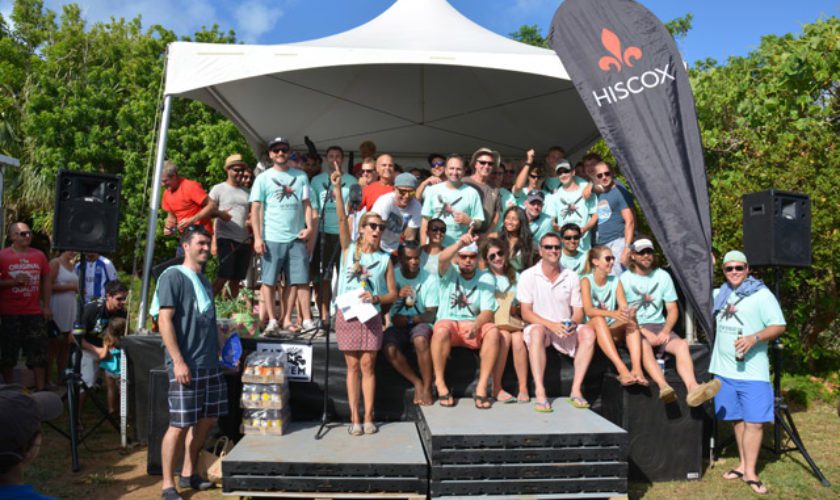 Lionfish tournament and community event gears up for fifth year

As an invading underwater species, the lionfish is king.

Beautiful and otherworldly in appearance, lionfish spend their lives hunting at coral reefs. Video of lionfish at depth shows them swimming lazily as they gobble down most any unsuspecting small fish, octopus, and crab. Native to Asian and Pacific waters, they have no natural predators in Bermuda, they are quilled with venomous spines, and they reproduce in huge numbers; each mature female fish is capable of laying 30,000 eggs every three or four days, all year round.

Exasperated biologists admit there is no easy way to stop these voracious predators from depleting native marine species at the island’s reefs. But some Bermudians are attempting to beat the lionfish at their own game—by eating them.

The “Eat Em to Beat Em” Groundswell Lionfish Tournament, now an annual summer event hosted at BIOS, brings community members together to raise awareness of this nuisance species while also promoting the fish as a viable, delicious—and plentiful—food option.

The tournament begins at dawn, when boats of certified lionfish hunters (called cullers) motor to reef dive sites to spear as many lionfish as possible before returning to BIOS for weigh in. Filleting tables are set up on the dock, and in the afternoon the public is invited to a party with music, prizes, and a demonstration of safe handling (to avoid those venomous quills).

After the fish are filleted, guest chefs cook them and share tastes (described by one BIOS educator as “very mild and flakey, similar to snapper”).

While lionfish are showing up increasingly in number and at shallower depths, Bermudians appear dedicated to helping with the problem. In 2013 there were 167 people registered for lionfish culling permits. Today that number has tripled, to 550 culling permits.

The Bermuda Department of Environmental Protection introduced the culling permits as part of the Bermuda Lionfish Task Force Control Plan, implemented with assistance from the Ocean Support Foundation. For a fee, residents take a two-hour course, typically offered once a week, that covers topics such as safe handling and spearing practices.

Upon completion of the course, participants receive a permit tag, which allows holders to spear an unlimited number of lionfish anywhere on the island, including within the one-mile limit and in protected areas.

During last year’s tournament, 72 lionfish were landed. The event attracted 94 participants on eight lionfish catching teams, all of them using spears. “This was the most that we have caught during the tournament,” said event organizer Matthew Strong. “There were many more than usual caught through the winter, however, so we expect more at this year’s tournament.”

Strong has a background in marine ecology that includes work on several reef survey projects in Bermuda and Florida. He ultimately decided to start an event production and promotion company, and in 2009 used his passion about marine issues to cofound the nonprofit, Bermuda-based advocacy group Groundswell. The organization, comprised of scientists, fishermen, and business people, is dedicated to raising awareness of the lionfish issue in Bermuda.

“We wanted to use our events and marketing experience to help promote and educate the public on the importance of Bermuda’s reefs and the threats that they face,” Strong said.

Funds raised during the tournament (there is a $25 entrance fee) will be used to support lionfish research at BIOS and the Bermuda Lionfish Task Force.

“We see ourselves as helping these pioneers by doing what we do best, which is putting on well-organized events and developing creative marketing campaigns,” he said. “This hopefully frees up the cullers and the scientists to do what they do best, and we hope we can help raise money to support their ongoing efforts.”

The “Eat Em to Beat Em” Groundswell Lionfish Tournament will be held Saturday July 18th. It is free to the public and includes free parking at BIOS. Registered participants begin the day at dawn; those coming for just the festival and tasting may join from 3 until 8 pm. Sponsors include BIOS, Gorham’s, the Ocean Support Foundation, Hiscox, Cellone, Gosling’s Rums, and Bermuda Ocean Explorers. For more information on the event, including the tournament registration form and permitting information, visit the Groundswell website  www.reefspect.com

Interested in sampling lionfish? After tasting fish at the tournament, discover more recipes like this in the Reef Environmental Education Foundation (REEF) Cookbook