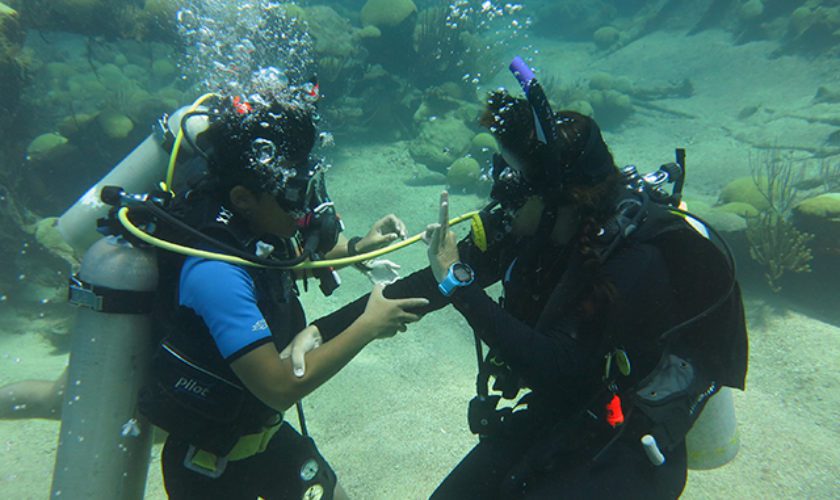 On any given day, you’re likely to see Kyla Smith down at the BIOS waterfront corralling students onto a boat for a trip to Nonsuch Island; preparing materials for a lecture and subsequent lab on marine plankton; or leading a tour of the BIOS labs and research facilities.  Smith, 30, is using her experiences and expertise—which includes certification as a SCUBA instructor—in a role she never imagined: marine science educator. As an Ocean Academy program assistant, she is an integral part of the education team at BIOS who is responsible for teaching school students about the importance of the ocean and their role in marine exploration and conservation.

“The best experiences for me, personally, are when I watch the students’ eyes light up for the first time while SCUBA diving,” Smith said. “In that moment I can see they’ve fallen in love with the ocean and I’m the one that got them there.”

Smith’s passion for ocean science runs in her family. Her cousin, Robbie Smith, is curator of the Bermuda Natural History Museum—part of the Bermuda, Museum, Aquarium, and Zoo (BAMZ)—and has a long history with BIOS. From his start as a BIOS Bermuda Program intern in 1977, followed by his doctoral research at BIOS, Smith returned to BIOS to set up the Benthic Ecology Research Lab in 1991 and, today, is an adjunct faculty member.

“I wanted to come to BIOS since I was a little girl,” Smith said. “I was interested in marine biology and my folks always said I should go see Robbie.”

Like many Bermudian students, her first visit to the Institute came on a class visit for the JASON Project, one of the first comprehensive STEM (science, technology, engineering, and mathematics) curricula intended to connect students in the classroom with professional scientists and engineers. Coincidentally, her older cousin was the diver who students talked to via webcam, something Smith thought was “super cool” at the time.

While she was a student at Warwick Academy, Smith followed in her cousin’s footsteps and began volunteering for BAMZ, spending weekends helping with animal care and exhibit maintenance. Her commitment to the organization paid dividends and she was eventually hired as a full-time aquarist. In addition to conducting water chemistry analyses, animal husbandry duties, and performing lab maintenance, Smith began to develop her communication and public outreach skills.

“I ended up loving the North Rock exhibit and eventually did the interactive dive talks in that tank,” said Smith. “I would have all the animals circling around me in a feeding frenzy and Darth Vadar [a large black grouper, who for years was one of the most charismatic and memorable animals at the aquarium] was always right by my side for belly rubs.”

After a year at Bermuda College, where she received the President’s Award for Scholastic Achievement, Smith traveled to the University of Tampa in Florida, majoring in environmental science with a minor in marine biology. During her four years of undergraduate education, Smith frequently returned to Bermuda during the summer to reprise her position as an aquarist, eventually supervising and teaching new interns to care for and educate the public about the North Rock exhibit.

After graduation, Smith was hired by BAMZ as a marine operations collector and quarantine technician, collecting organisms for the aquarium’s exhibits and conducting a variety of procedures and analyses on animals prior to their introduction into the permanent collection. In this capacity, Smith worked closely with Chris Flook—then head of the department at BAMZ and current dock and small boats manager at BIOS—for ongoing research with both the Bermuda Turtle Project and the Spotted Eagle Ray Project.

“Out of all the interns we had that returned each summer, Kyla was one of the very few who was uniquely qualified in boating, specimen collecting, and education,” Flook said. “She always went the extra mile and it’s exciting to work with her again.”

Adventures overseas have also provided her with a unique perspective on biology and ecology.

Her first big adventure—described by Smith as “the highlight of my life”—came during her last year at Warwick Academy, where she was selected to participate in Class Afloat, an experiential education program that offers students the opportunity to spend more than ten months sailing the world on a tall ship. With an itinerary that included stops on four continents and more than a dozen counties, the experience gave Smith stamps on her passport, and so much more.

“Being from a tiny island, experiencing other cultures was such an eye opener,” she said. “This provided me with a depth of understanding and an enriched worldview that has benefited me time and time again..”

As an undergraduate student, she expended her horizons even further, taking advantage of the numerous travel abroad courses offered at her alma mater. She visited Costa Rica in 2009 to study tropical ecology; Honduras in 2010 for a coral reef course, where she also conducted underwater research; and Ecuador and the Galápagos Islands in 2011 to study native flora and fauna.

But it was while working at BAMZ that Smith was offered an opportunity she couldn’t refuse: the chance to work as a research technician with Oceans Research, a marine and terrestrial research and conversation organization based in South Africa. For five months she assisted researchers studying the white shark population in Mossel Bay, South Africa, taking tissue samples, using acoustic tracking devices, and adding to the photo identification catalog that is used to monitor the white sharks.

This experience had such an impact on Smith that she is contemplating returning to school for her master’s degree to continue working with sharks. For the time being, however, she is bringing her experiences full circle and using her time at BIOS to inspire the next generation of marine scientists, as she was inspired more than nearly two decades ago.

“Ultimately, continuing to work in or around the ocean my entire life will keep me happy,” said Smith.