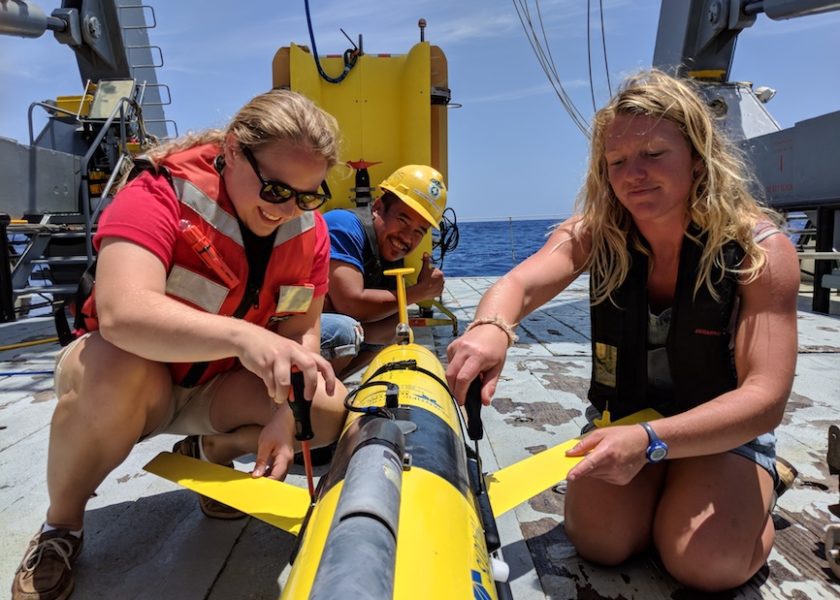 Behind every successful ocean science research cruise—whether it’s for a day, a week, or multiple months—is a cadre of professionals ensuring that everything runs smoothly: the marine technicians. These individuals possess a unique set of skills that combines technical and engineering expertise, a broad understanding of ocean science, communication, and a willingness to often work long hours in the elements on the back deck of a ship.

For the last decade, the Marine Advanced Technical Education (MATE) Center has been placing college students in both at-sea and land-based internships, with the goal of developing a competitive and well-prepared marine technology workforce. These internships offer students the opportunity to learn a variety of marketable skills, including research cruise preparation and logistics; scientific instrumentation set-up and operation; deck rigging and safety; and basic seamanship and navigation.

More than 350 students have participated in a MATE internship since the program’s inception, with over half choosing to work aboard an oceanographic research vessel within the University National Oceanographic Laboratory System (UNOLS). Created in 1972, UNOLS is an organization of 59 academic institutions and national laboratories involved in oceanographic research, including 18 research vessels at 14 operator institutions around the United States.

BIOS is one of these operator institutions, currently managing and operating the 170-foot (52 meter) research vessel (R/V) Atlantic Explorer, which it acquired in 2006 to replace its previous research vessel, the Weatherbird II, that had been in use since 1989. The Institute hosted its first MATE interns in 2003 and, since then, has supported a total of 16 students for internships ranging in length from two weeks to six months.

“In 2018 BIOS had the most MATE interns among all of the operator institutions,” said Nick Mathews, BIOS ocean technical services manager. “This represents our ongoing commitment to supporting the global scientific community through hands-on technical education and training.”

For many, these experiences serve as springboards to longer-term internships or full-time employment at UNOLS organizations and other scientific research institutions. Emily Cheung, 23, first heard about the MATE internship program while volunteering for the National Oceanic and Atmospheric Association (NOAA) aboard the UNOLS vessel R/V Hugh R. Sharp.

After applying for a few years in a row, Cheung was offered a two-month internship at BIOS in 2018. During this time she had the opportunity to sail on multiple research cruises as part of the Bermuda Atlantic Time-series Study (BATS) program, as well as work with the autonomous underwater vehicle (AUV) SENTRY as part of a Woods Hole Oceanographic Institution cruise aboard the Atlantic Explorer. Toward the end of her internship, Matthews told her about the six-month MATE internship, which landed her a position at the University of Washington working aboard the R/V Thomas G Thompson.

“I always thought that, in a career, I’d have to split my love for oceanographic research and spending time at sea, but I saw that, as a technician, you get the best of both worlds,” Cheung said.

Mason Schettig, 30, earned his undergraduate degree in marine technology from Cape Fear Community College in Wilmington, North Carolina where many MATE interns also begin their careers. “I wanted to apply to MATE because I figured the internship would be a solid stepping stone into the marine technology field, as opposed to landing a job straight out of school,” he said. Toward the end of his two-month MATE internship at BIOS, Schettig learned about a marine technician opening at the Institute and starting working full-time just one month after his internship ended. Now, nearly three years later, he is leaving BIOS for a marine technician position at the Scripps Institute of Oceanography with the University of California at San Diego.

Like Schettig, the MATE internship also set Mathews, 29, on a career trajectory that included a full-time position at BIOS. After completing his six-month internship in 2014, Mathews worked as a marine technician aboard the Atlantic Explorer for more than two years. In mid-2017 he was promoted to ocean technical services manager and is now responsible for overseeing cruise planning; providing onboard science equipment and instrumentation support; ensuring the quality of onboard data collection; and offering science logistics support to local and visiting researchers.

“The MATE internship definitely gave me a leg up in the field,” Mathews said. “Having the opportunity to work on an active research vessel provided me with critical insights and skills that I use in my current position. Because of the internship, I’m able to better support the scientists that use the Atlantic Explorer, which results in a more successful research cruise for everyone involved.”