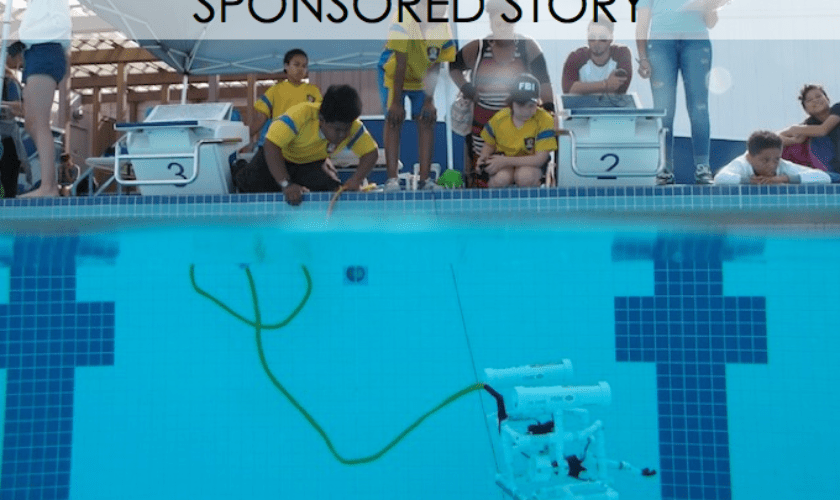 May the Best Underwater Robot Win

They came with robots in their arms and dreams of undersea victories. On April 30th, more than 100 Bermudian students met at the National Sports Centre pool to compete in the island’s second annual underwater robotics challenge, a partnership between BIOS and the Mid Atlantic Robotics In Education Program (MARINE), with lead sponsor HSBC.

Student teams spent months building their remotely operated vehicles, or ROVS, during after-school programs and in collaboration with teachers, parents, and other mentors. During April’s culminating event, 28 teams competed against each other in a variety of challenges in the pool that included manipulating their creations on missions that simulate real-world engineering problems involving ROVs.

“We made a lot of modifications to our robot from last year and we are happy it came through for us,” said student Kevin Sunga, 14, a member of the Clearwater Middle School team “CW-Engineering.”  His team’s robot, equipped with a claw-like arm and made buoyant by strips of bright foam wrapped around the frame, was heavier and more stable than the previous year, the result of trial-and-error from their prior competition.

This year’s topic theme was “From the Gulf of Mexico to Jupiter’s moon Europa: ROV Encounters in Inner and Outer Space,” which highlighted the role of ROVs in scientific research and exploration in the harsh environments of the deep ocean and outer space. During the challenge, students set their robotic vehicles on a variety of missions, including collection of a mock coral sample from the deep sea (the bottom of the pool). Students also earned points from judges based on team marketing posters and during interviews about their ROVs.

At the beginning of the school year, each team received a basic kit, which they used as a starting point to build their individual robots, adding floatation, weights, a camera, and robotic arms as they progressed through design iterations. On the day of the competition, the judges, including those who go to sea regularly with real undersea robots, admired their efforts.

“It’s amazing what they are doing with these designs and technology,” said Justin Smith, operational technology services manager for the BIOS-operated research vessel Atlantic Explorer and one of 23 staff members from BIOS who volunteered at the event.

Smith, noting one team’s struggle with a manipulator claw that initially failed to open and close on commands sent to the robot through a connected cable, said he could sympathize.

“At sea and on the ship, it’s pretty normal for us to be dealing with balky robots and troublesome instruments, so this gives students a very real look at marine engineering,” he said.

For the 2016 challenge, MARINE partnered with the Marine Advanced Technology Education (MATE) center to host a regional challenge. In Bermuda, students competed at beginner and mid-range levels; internationally, the program offered an advanced level for older students (an eventual goal for the program on the island, Baird said). Students completed the event on the same challenge courses as other teams internationally.

Roma Hayward, a parent of a participating Warwick Academy student, said she appreciated the skills her 10-year-old son, Noah, gained from handling and applying a new variety of tools. “He loved learning how to weld and how to do basic electrical wiring,” she said. “The students grabbed hold of new concepts through this process and saw it all come together with their working robots.”

HSBC Group, which provided financial support for the event, said they believe that businesses have a responsibility to the communities in which they operate. “The competition was an exciting way to reinforce HSBC’s commitment to our young people in Bermuda and we are very pleased here in Bermuda to support important local projects such as this,” said Chris Brown, who is head of Financial Crime Compliance & Regulatory Compliance at HSBC Bank Bermuda Limited. “All of the teams exhibited impressive levels of teamwork, clearly demonstrating how working together, common goals can be achieved.”