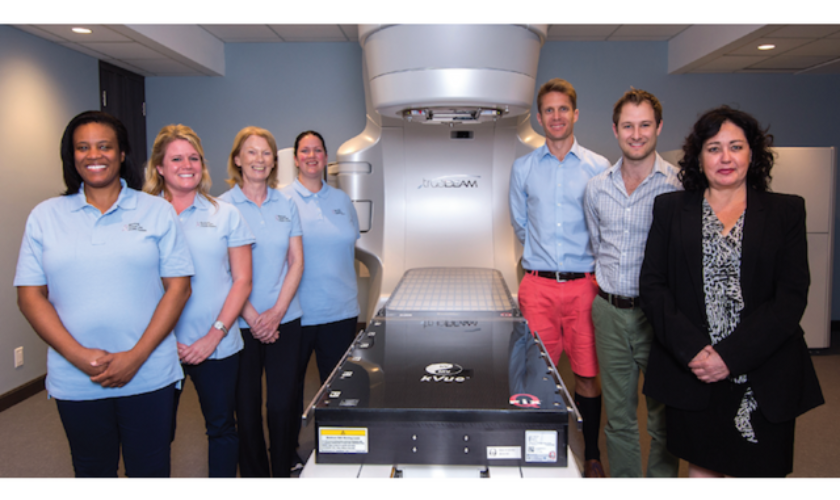 Driving onto the grounds of the Bermuda Cancer and Health Centre (BCHC) in Paget, you may notice that the parking lot area looks recently renovated. What you may not know is the reason why. Directly underground, through unassuming layers of asphalt and concrete, lies a massive Varian TrueBeam machine; a remarkable piece of state-of-the-art radiotherapy technology that promises to revolutionise cancer treatment in Bermuda while positively influencing the island’s overall health landscape.

As one of the most comprehensive radiation machines available on the market, the TrueBeam can treat roughly 95 percent of known cancers, making it an ideal fit for a jurisdiction like Bermuda. With older technology, different types of cancers would have required multiple machines (that is, one for prostate cancer, one for brain cancers, one for image-guided treatment), which wouldn’t have been feasible given our population size. Additionally, the TrueBeam is expected to remain a leading-edge piece of technology for the next 10–15 years, which will eliminate the cost of having to replace it every two to three years, as with conventional hardware of a similar nature. The BCHC expects that the machine will treat approximately 15 patients per day, eliminating the need for radiotherapy patients to travel overseas for months at a time, mostly in isolation from their friends and loved ones.

To supplement the radiation machine, the newly renovated BCHC also features a full integrative oncology suite that promotes nutritional, herbal and mind-body therapies to complement standard cancer treatments such as radiotherapy. Clinical oncologist Dr. Christopher Fosker argues that for too long, there has been a sense that conventional medicine is at conflict with a more natural approach, when in reality, a holistic approach including both therapies can ensure that every aspect of care is considered.

But how did this ambitious endeavour become a reality?

Building a radiotherapy centre in Bermuda is a concept that had been discussed for decades by several interested entities, but the multiple proposals submitted over the years never came to fruition due to worries about the project being too complex to execute. In 2010, however, things changed when BCHC’s executive director, Tara E. Curtis (who is a radiation physicist), and the BCHC board developed their own business case and cost-benefit analysis to reattempt the project from their unique knowledge background. Needless to say, unprecedented momentum was gained from then onwards, and the pieces began to slowly come together towards making the decades-old dream come to life.

At a chance meeting in 2012, Curtis met Dr. Fosker, who would eventually become the current medical director of the BCHC. Dr. Fosker had travelled to the island on a number of occasions since 2007, periodically visiting the hospital’s oncology department to better understand Bermuda’s cancer treatment needs. The two bonded over their shared ambition to bring radiotherapy to the island, and after the BCHC’s public commitment to the initiative in 2014, they began to work towards that goal in an official capacity in January 2016. With a diverse background in radiotherapy, chemotherapy, molecular therapy and immunotherapy, Dr. Fosker expects that the existence of the new radiation machine will have a positive knock-on effect that improves Bermudian health care as a whole. “Providing radiotherapy in Bermuda will bring down the overall cost of health care and reduce the amount of money that is going overseas at present,” he says. “More indirectly, but potentially more significantly, it is hoped that by working collaboratively with other health-care providers, care on the island can be delivered to the highest standard at affordable rates with equal access for all.”

Palliative care patients, the uninsured and the elderly stand to benefit greatly from the radiotherapy initiative, as having a local treatment option automatically addresses issues like stress, cost and inability to travel that can hinder one’s ability to pursue care overseas. There is also mounting evidence that cancer patients live longer when constantly surrounded by loved ones, meaning that the 90–100 Bermuda residents per year who would otherwise fly to places like Johns Hopkins, Lahey Clinic or Mayo Clinic for radiation will get to maximise time with their friends and families.

The BCHC team couldn’t have realised their dream without help, which is why they formed a strategic relationship with the Boston-based Dana Farber/Brigham Women’s Cancer Centre (DF/BWCC), which provided invaluable oversight during the design, construction and project management phases of the new radiotherapy centre. Now that the facility is open, DF/BWCC will continue to be involved in every aspect of the treatment process, with each individual patient’s treatment plan being initially designed in Bermuda, then reviewed and completed by one of their overseas specialists. As the cancer hospital ranked number four in the US, according to U.S. News & World Report, DF/BWCC, along with the BCHC, is providing residents an unprecedented standard of treatment that helps put patients and their families at ease.

As for assistance on the local side, the radiotherapy initiative has been well-supported by both the government and the community at large. The BCHC has worked closely with the Ministry of Health, the Chief Medical Officer, the Health Insurance Department and the Bermuda Health Council to provide a mechanism which allows all Bermuda residents to have access to this important care, regardless of health insurance coverage or ability to pay. What makes this possible is a combination of continued fund-raising events, corporate donations and community financial support. The largest annual fund-raiser is the Relay for Life, an internationally celebrated event which was only introduced to Bermuda in 2014 and has already raised an impressive $1.6 million for the BCHC. Other initiatives include an annual raffle, Breast Cancer Awareness Month events and Movember (No-Shave November).