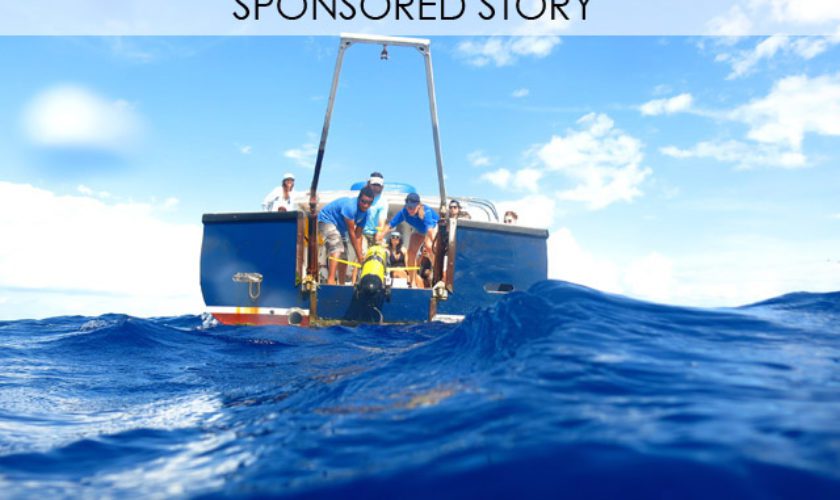 BIOS’ newest gliders made their research debut in late September when they slipped into waters near St. David’s Head and headed to a predetermined destination 50 miles offshore Bermuda. For the next nine months, the duo known as Jack and Minnie will use their payload of scientific sensors to record daily changes in water chemistry and currents, as the summer cap of warm surface waters is mixed and replaced with cooler, nutrient-rich waters from below, and tiny microbes and phytoplankton respond to the changing conditions.

Late winter to early spring brings a “bloom” of phytoplankton and a consequent explosion of marine life in the Sargasso Sea. Measurements of temperature, oxygen, salinity, nutrients, chlorophyll, and currents, sent back several times daily via satellite to scientists on shore, will provide detailed insights about the interplay between weather and ocean currents, and how these influence the cycling of nutrients, oxygen, and carbon at the core of the marine food web.

Phytoplankton use sunlight to transform nutrients and carbon dioxide into oxygen, which produces half the air we breathe, and draws carbon dioxide, a potent greenhouse gas, out of the atmosphere. The phytoplankton themselves are food for zooplankton and larger marine organisms, while bacteria and other marine microbes use the oxygen and organic material to recycle and replace nutrients in the water.  Interactions between ocean currents and wind can enhance or suppress the delivery of nutrients from deep waters to the upper sunlit layers, where phytoplankton live and kick start the entire food web.

Marine technician David Aragon of Rutgers University and scientist Ruth Curry, who heads the glider program at BIOS, made adjustments to the glider named Minnie before deploying the vehicle offshore Bermuda in September. Minnie, and a companion glider named Jack, will spend the next nine months collecting data about ocean processes that support the marine food web.

The 6-foot-long gliders continually dive to a depth of 3,000 feet and climb back to the surface in a saw-tooth shaped pattern. Operating in tandem, Jack and Minnie will circle around the site of the long-running Bermuda Atlantic Time Series (BATS), which for 27 years has built a month-by-month picture of the cycling of carbon, oxygen, nutrients, and other ocean properties in the Sargasso Sea.

Making eight dives each day, the gliders will greatly enhance the amount of information being collected, which, combined with the BATS measurements, will fill in key pieces missing from our understanding of these complex marine processes.

“We hope to see, in exquisite detail, exactly what is going on under the surface from late summer to late spring,” said physical oceanographer Ruth Curry, who oversees the glider program at BIOS.

Like gliders used by other research institutions, BIOS gliders are being used for a variety of applications. In October 2014, BIOS’ first autonomous glider, Anna, was deployed prior to Hurricane Gonzalo for a rare look at what happens in the ocean underneath these powerful storms. Gliders are also being used to help predict hurricane intensity by providing information about subsurface ocean temperatures, on which tropical storms feed.

The BIOS gliders are equipped with a variety of sensors: a CTD (for conductivity, temperature, and depth) and optical sensors that measure oxygen, fluorescence and backscatter, an indicator of the abundance of microscopic marine organisms in the water.

Operating as a team, each glider also has specialized capabilities related to the scientific mission. Jack has been outfitted with an Acoustic Doppler Current Profiler, or ADCP, which provides detailed profiles of ocean currents. Minnie is equipped with a state-of-the-art nitrate sensor to measure nutrients.

The 6-foot-long gliders dive to a depth of 3,000 feet. Several times each day, the gliders resurface and send data via satellite to scientists on shore. They also receive instructions about any changes in their missions.

Together these measurements will enable researchers to address long-standing questions about biological productivity that supports the entire marine food web, and the ocean’s role in drawing down carbon dioxide from the atmosphere that affects the rate of greenhouse warming.

The gliders, manufactured by the Massachusetts company Teledyne Webb Research Corporation, are controlled by land-based researchers at various institutions around the world. Scientists like Curry pilot the vehicles from computers or mobile devices, sending instructions via satellite to direct them along desired tracks or adjusting the mission by sending the gliders a new set of instructions.

Like airborne gliders, these ocean gliders have no propeller but use aerodynamic wings to “fly” through the ocean. Batteries power a pump that changes the glider’s volume and buoyancy—by pushing oil into or out of an inflatable compartment—and causes the vehicle to alternately rise or sink.  The wings give the vehicle forward motion, and a movable tail rudder enables it to be steered left or right.

Gliders like these operated by BIOS are revolutionizing oceanography by increasing the amount of data acquired at a fraction of the cost of traditional technologies. While satellites provide global views of the ocean’s surface, and ship and mooring-based observations provide information at particular sea locations, the complexity of the ocean requires higher resolution measurements in both time and space.

The gliders are part of a BIOS program known as the Mid-Atlantic Glider Initiative and Collaboration, or MAGIC, which began with Anna’s arrival last year. This technology has already significantly enhanced BIOS’s research and educational capabilities, and will propel important scientific advances in the coming months and years.

The establishment of MAGIC was made possible by the generous support of the Grayce B. Kerr Fund of Easton, Maryland.  The gliders Anna and Jack were named for two young siblings in the Kerr Family. Funding for Minnie was generously provided by the Simons Foundation of New York, New York.  The Simons Foundation selected the name to honor Marilyn Simons’ great-grandmother Minerva, whose nickname was Minnie.