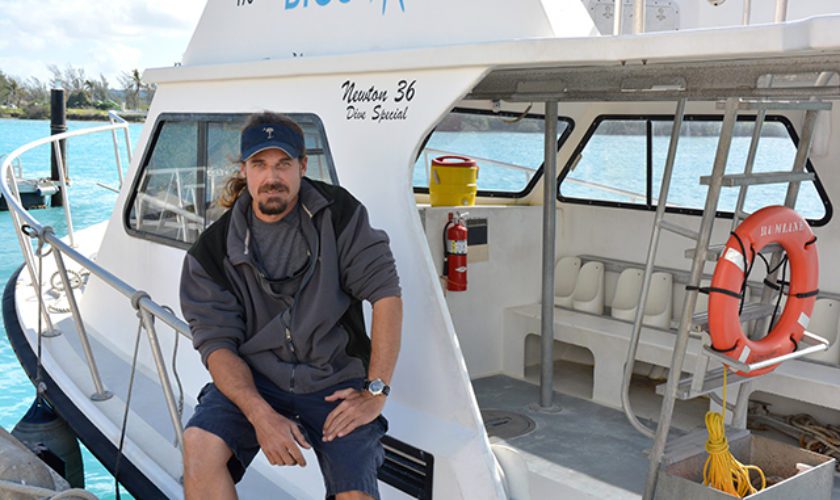 Those who have lived in Bermuda or spent time around the Bermuda Aquarium, Museum and Zoo (BAMZ), participate in the annual Groundswell Lionfish Tournament, or remember the Blue Halo initiative, have likely heard of Chris Flook. Known alternately as “Flookie,” “the godfather of the Bermuda lionfish movement,” or “that guy with the ponytail and sunglasses,” Flook was born and raised in Bermuda and has spent his life working to bring Bermuda’s marine environment to the forefront of public discourse and political awareness.

Flook, 43, spent 16 years working as the collector of marine specimens for BAMZ, a position that had him exploring Bermuda’s waters not just to populate aquarium exhibits, but also to assist visiting scientists in their research. From locating lionfish for harvest to wrangling eagle rays for tagging, Flook’s reputation as a “fish whisperer” often preceded him, eventually landing him a spot with the “Ocean Vet” television series.

While with BAMZ, Flook traveled to the Bahamas for a Reef Environmental Education Foundation lionfish study, which inspired him to begin the Bermuda Lionfish Project. This grassroots initiative to control the invasive lionfish population is the key focus of the Bermuda-based Ocean Support Foundation (OSF), where Flook sits on the Board of Directors. With its unique technical diving team that is qualified to dive beyond recreational dive limits using closed-circuit rebreathers (devices that eliminate carbon dioxide from an exhaled breath, allowing the diver to inhale it again), OSF works closely with the Bermuda government and various local and international groups (including BIOS) to achieve a sustainable reduction of the lionfish population in Bermuda’s waters.

More recently, Flook worked as a consultant for the Pew Environment Group, where he served as director of the Blue Halo Initiative. For more than four years he led a local effort to raise support for the creation of a “no-take” marine reserve within Bermuda’s Exclusive Economic Zone to protect both the Sargasso Sea and Bermuda’s marine resources. The position allowed Flook to utilize his skills in communicating scientific information to the public, but it was also a window into the world of environmental policy.

“Science has always played catch-up with policy,” Flook said. “This experience made me realise the need to create a better synergy between the two.”

When the Small Boats & Docks Supervisor position opened at BIOS late last year, Flook’s knowledge of local waters, combined with his boat piloting and diving skills, made him an ideal candidate. Flook said the move to BIOS represents, “an opportunity to play with a bigger science toy box” to address ongoing scientific investigations.

Bermuda Native
Flook grew up in St. George’s and St. David’s, where most of his neighbors were traditional Bermudian fishermen. This is where he obtained some of his earliest knowledge about local marine life and Bermuda’s environmental history.

One Man’s Trash…
His first fish tank was a cooler that he and his brother found floating in the ocean. “It had no lid but we pulled it ashore and would do water changes in the morning before school and again after school,” Flook recalled.

Young BIOS Visitor
Growing up, he visited BIOS (then the Bermuda Biological Station for Research) with his parents, who were friends with Wolfgang Sterrer, a former director and faculty member. “We used to come up as kids to play on station,” Flook said. “I remember us pretending one of the old buildings by the water was our ice cream stand.”

Olympic Swimmer
In 1992, at age 19, he represented Bermuda in the Olympics. He also set records in the 100 meter and 200 meter breaststroke at the 1993 Central American and Caribbean Games, and participated in the 1991 Pan American Games and the 1994 Commonwealth Games.

Aquatic Ink
He has an algae named after him and its likeness is tattooed on his foot. While working in Bermuda in 2008, Craig Schneider, a professor of biology at Trinity College in Connecticut, identified a new species of the genus commonly known as “sea grapes” and named it Botryocladia flookii or, commonly,“Flook’s sea grapes.” This algae is eaten by parrotfish and can be found most abundantly in fish ponds. (“Now I have to discover a fish species and name it after him,” joked Flook.)

Surprising Discovery
Along with the aforementioned Schneider, Flook helped discover a new species of algae off St. George’s Island in Bermuda. Schneider and Flook published their findings last year in the journal Notulae Algarum, detailing the discovery of a patch of Halimeda lacrimosa during investigation of a recently identified WWII shipwreck. The calcareous alga is commonly found in the Caribbean and its presence in Bermuda’s waters represents an extension of its previously known natural range.

International Team Member
He is a team leader on the OceanTech project, which—as Flook describes it—is “part two of the OceanVet series.” OceanTech, an education and media project, is working with scientists around the world, including Bermuda, to gather data required by governments and conservation organisations to implement marine protected areas.

Investigator of Local Species
He is working with local scientists, including BIOS researcher Gretchen Goodbody-Gringley, on a project funded by the Darwin Initiative to conduct a population assessment and investigate the spawning patterns of the Bermuda anchovy. This endemic species, also known as “hogmouth fry,” was recently put on the “red list” by the International Union for Conservation of Nature, indicating a high risk of global extinction.