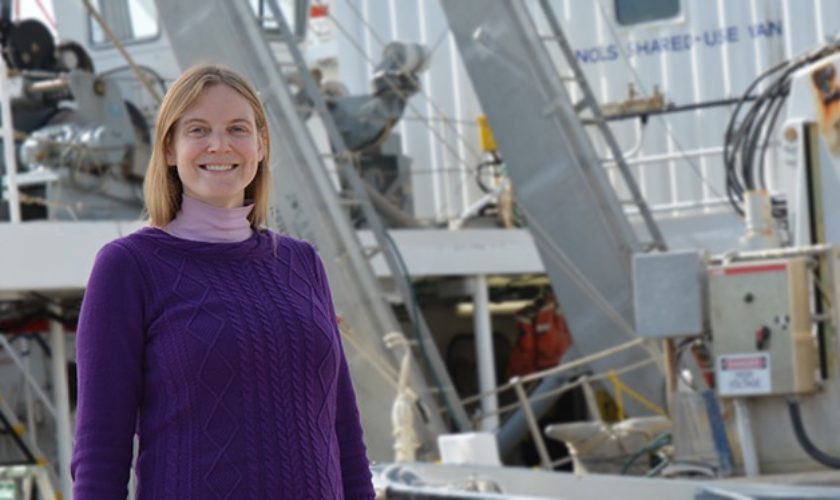 Some of the most beautiful creatures in the sea are so small they are rarely seen and easily escape our attention.  “Sea butterflies,” called pteropods by scientists, are lentil-sized marine snails that flit through oceans around the world. While a land snail uses its muscular foot to slide along a surface, pteropods beat their foot like tiny wings to hoist their translucent body upward in the water. Delicate shells house their soft bodies, and shell spirals and spikes have inspired artists and scientists alike.

In the last decade, pteropod shells have also revealed signs of a struggle: scientists have discovered pitted, rough shells in some pteropod populations. Ocean acidification, caused by burning fossil fuels, is reducing the mineral that pteropods use to build their shells, rendering them weak and fragile and causing slower shell growth.

“Right now there is a huge interest in pteropods from the scientific community because they are a sentinel of ocean acidification and climate change,” said biologist Amy Maas, a pteropod expert who recently joined the Bermuda Institute of Ocean Sciences. After working in polar regions, she is eager to begin studying the diverse pteropods in the Sargasso Sea.

Most observations of pteropods’ dissolving shells and stunted growth have been collected in polar regions, where pteropods are an abundant and essential component in the marine food web.  Pteropods must extract their food from a liquid world; some of them form a web of mucus that snags dinner out of the currents, and some of them are vicious predators that can suck other pteropods out of their shells.  Whether grazing or hunting, they are an essential link between the tiny marine plants at the base of the food web and large organisms like salmon and whales.
Weak-shelled pteropods have been well documented in polar regions because local conditions and cold waters more readily absorb carbon dioxide, which reacts with water to form carbonic acid and drives acidification. As such, polar pteropods are currently experiencing heightened acidification that will be more common globally in the future, and will affect a wider range of shelled organisms.

Although polar regions are bearing the brunt of change, the twenty-five year record of seawater chemistry captured by the Bermuda Atlantic Time-series Station (BATS) definitively shows ocean acidification in the Sargasso Sea.

The oceans have absorbed about one-third of the carbon dioxide emissions pumped into our atmosphere since the industrial revolution, an exchange from atmosphere to ocean that has relieved the rate of global warming but had serious consequences for ocean chemistry.  Since preindustrial times the average seawater pH has dropped from 8.2 to 8.1. This may seem negligible, but since pH is on a logarithmic scale, translates to modern seas that are 30% more acidic than they were in preindustrial times.

Shell-building organisms like pteropods, shellfish, and corals all face a continued rise in acidity in the coming decades as the abundant carbon dioxide in the atmosphere equilibrates with the ocean.
Richard Feely, a senior scientist at NOAA’s Pacific Marine Environmental Lab who has studied pteropod shell dissolution in Pacific coastal waters, stated in a press release that more research is needed to study how corrosive waters may be affecting other species in the ecosystem. “We do know that organisms like oyster larvae and pteropods are affected by water enriched with carbon dioxide. The impacts on other species, such as other shellfish and larval or juvenile fish that have economic significance, are not yet fully understood.”

In the vastness of the ocean, it is easy for small creatures to escape our attention.  But the damaged shells of pteropods might just be the “canary in the coal mine,” highlighting the need to ask how ocean acidification is impacting many kinds of marine life, and to listen to the answer.