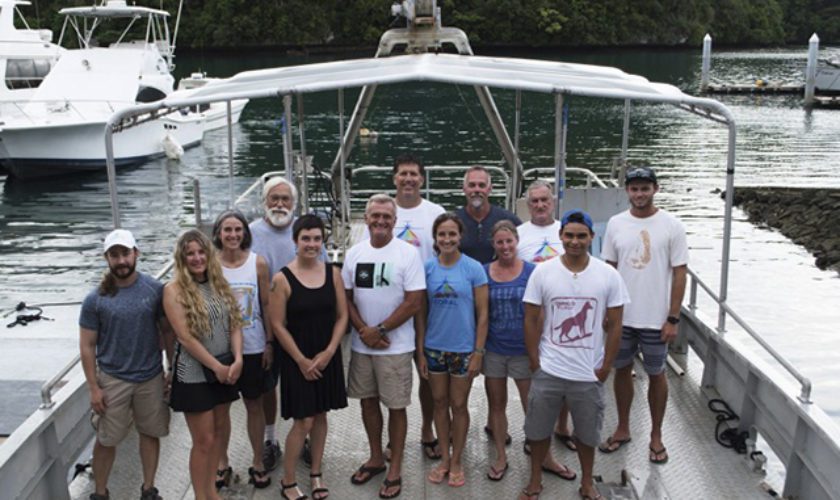 The Magic of the Marianas and Micronesia

Many people are familiar with—or have at least heard of—the Mariana Trench. Located in the western Pacific Ocean, this crescent-shaped feature on Earth’s crust is the deepest part of the world’s ocean, reaching a maximum depth of 10,994 meters (36,070 feet) in an area known as “Challenger Deep.”

Fewer people, however, are familiar with the Mariana Islands—a chain of 15 islands that include ten uninhabited volcanic islands to the north and five limestone islands to the south. The Marianas are divided into two political regions: the Commonwealth of the Northern Mariana Islands (a Commonwealth of the United States comprising Saipan, Tinian, and Rota) and Guam (a US territory). Fringing the coasts of each of these islands are lush coral reefs that support indigenous fishing and a large tourism economy, including many ecotourism opportunities.

For six weeks in April and May, the coral reefs of the Mariana Islands also supported a cadre of scientists deploying instruments and collecting data as part of NASA’s COral Reef Airborne Laboratory (CORAL) mission. Using a state-of-the-art sensor—the Portable Remote Imaging SpectroMeter (or PRISM)—housed in a Gulfstream-IV airplane, CORAL will provide a new perspective on the function and future of coral reef ecosystems.

The data collected by PRISM, and validated through extensive in-situ (or in-water) measurements in the field, will form a series of maps that indicate the relative densities of coral, sand, and algae in each study area, as well as rates of primary productivity (the creation of new organic material) and calcification (the process by which reefs produce calcium carbonate, an important determinant of reef health). With these maps, the CORAL team can build models to help scientists, resource managers, and politicians better predict how reefs are impacted by both natural and human processes.

From April 7-18, the CORAL field validation teams surveyed locations in Guam and from May 1-16 they conducted similar validation activities in Palau, an island nation southwest of Guam and the Northern Mariana Islands whose coral reefs have been named one of the “Seven Underwater Wonders of the World” by the Council for Educational Development and Research (the Great Barrier Reef and the Galapagos Islands are two other famous examples on this list).

While in Guam, the three in-water validation teams surveyed 65 benthic cover sites (from which high-resolution photo-mosaics will be produced, allowing for detailed analysis of the various types of seafloor, or benthic, habitats), 6 metabolism gradient flux sites (which reveal information about reef productivity), 1 metabolism Lagrangian site (with instruments that measure reef productivity and calcification in a set mass of water, over a specific amount of time, along a set transect across the reef), and 42 water optical property sites (which yield information on how light travels through the water column, from the surface to the seafloor and back).

Having spent a significant amount of time doing underwater surveys in Guam during the mid 2000s, Eric Hochberg, an Associate Scientist at the Bermuda Institute of Ocean Sciences and the CORAL Principal Investigator, was pleased to see the reefs looking much the same as they did a decade ago.

“The conditions in Guam were great, with the water ridiculously clear just a few hundred meters offshore,” said Hochberg. “Honestly, the biggest challenge in Guam was the fact that we didn’t have access to a working field lab and had to create a makeshift lab in a conference room at the Hilton!”

Brandon Russell, a postdoctoral fellow at the University of Connecticut and part of the CORAL optics team, echoed Hochberg’s sentiments about the challenges in Guam. “Working in remote locations is incredibly challenging,” said Russell. “It forces you to be flexible in planning and implementation to successfully collect good data but, if you can overcome these challenges, there’s a great opportunity to collect a huge, unique, and varied data set.”

In Palau, the field teams surveyed 74 benthic cover sites, 10 metabolism gradient flux sites, 2 metabolism Lagrangian sites, and 52 water optical property sites. In addition, 23 sites were studied with an underwater spectrometer to collect measurements of benthic reflectance, or the amount of light that is reflected from the seafloor back to the ocean surface. Each benthic community—in this case coral, sand, and algae—has a different spectral “signature” (how much light is reflected as a function of wavelength), which means that measurements of benthic reflectance can be used to identify the composition of the seafloor.

The reefs in Palau lived up to their billing, providing a stunning natural backdrop for the CORAL survey work being conducted. Stacy Peltier, a research technician in Hochberg’s lab at BIOS and part of the CORAL benthic team, said the reefs there were a completely new experience for her.

“While in Palau we discovered a gap in our underwater communication,” said Peltier. “We had no way of conveying how awesome something was, so we had to invent a new diver signal: the head explosion. The scenery was so overwhelming you could barely decide what to look at.”

A view of Palau’s stunning and diverse coral reefs, along with some of its local fauna.
Photo credit: Eric Hochberg

And, unlike in Guam, the CORAL team had access to dedicated facilities and research vessels in Palau courtesy of the Coral Reef Research Foundation and the dynamic husband-and-wife team of Pat and Lori Colin (Director and Laboratory Manager/Research Biologist, respectively).

“It’s not an exaggeration to say that we wouldn’t have been able to complete this portion of the CORAL mission without the support of Pat and Lori,” said Hochberg. Agreeing, Peltier said, “Pat and Lori were eager to share their knowledge of Palau’s reefs and actively guided us through so many field aspects that could have easily turned into serious problems.”

The airplane carrying the PRISM instrument shuttled between bases of operation on Guam, Yap (part of the Federated States of Micronesia), and Palau, allowing the flight team to take advantage of shifting weather windows in each region. Over the six-week campaign a total of 75 flight lines were coll
ected, representing at least partial coverage of reef areas in Guam, Rota, Tinian, Saipan, Farallon de Medinilla, Anatahan, Guguan, Alamagan, Pagan, Asuncion, Maug, Farallon de Pajaros, and Palau.

With the campaign in the western Pacific complete, and with flight hours remaining, the CORAL investigation ended on a high note by flying PRISM over reef tracts in the Florida Keys. This “bonus reef” is the first CORAL data set from the Atlantic Ocean and will serve as another representative reef area in terms of reef type, physical forcings, human threats, and biodiversity.

“As we ended the campaign with a number of planned flight hours ‘in the bank’ we were able to quickly formulate a plan to image the coral reefs around Florida,” said William Mateer, CORAL project manager with NASA’s Jet Propulsion Laboratory (JPL).  “This reef was the initial location for the CORAL operational readiness test.  Weather cooperated and we had two days of great collections (22 lines) to add to the data available for science analysis.”

The field and airborne teams have returned to their respective home institutions and the CORAL project is now moving into the data processing and analysis phase, which will extend into 2018. CORAL datasets and data products are publicly available. For more information please visit coral.bios.edu/data or coral.jpl.nasa.gov.