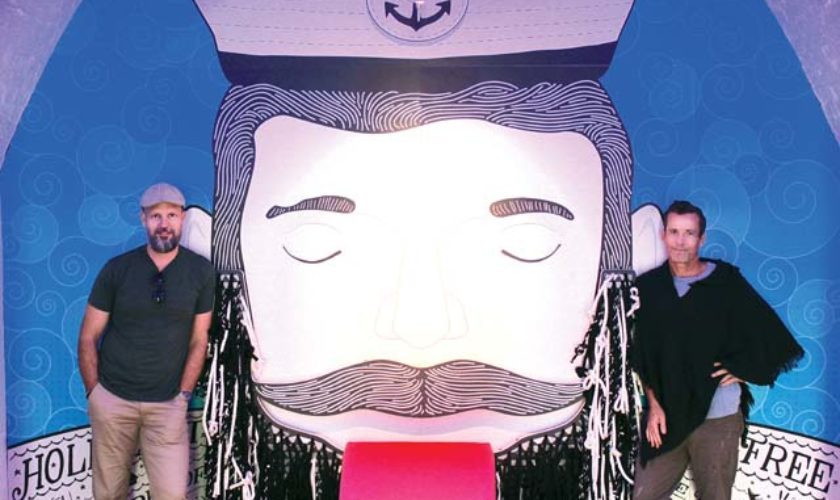 Step inside the new Museum Playhouse at the National Museum of Bermuda and you’d be forgiven for thinking you’ve been magically transported into the kid’s room of some artsy, Brooklyn loft.

Look closer, though, and you’ll realise you haven’t in fact discovered teleportation. The fifteen interactive exhibits chronicling Bermudian history, designed by Russell DeMoura and James Cooper, strike a bold, pastel-coloured contrast to the usual austere approach to our island’s past. It’s almost a shame the room is reserved for children.

DeMoura, a graphic designer, and Cooper, a local artist, have managed to incorporate fun, visually striking designs into a room that also teaches and informs. Whether it’s the history of the Royal Naval Dockyard, pilot gigs, agriculture or how to tie a knot, kids are interacting with Bermudian history in a whole new way.

“We both have fairly young kids and have been to enough places designed ‘for kids’ that just do not engage with them whatsoever,” said Cooper. “[The Museum Playhouse] has passed that test with my kids and Russell’s, too. They really do engage with everything in here.”

“We tested almost everything on them,” explained DeMoura.

Led by DeMoura’s background in graphic design, the two—having worked together previously as Fungus Art Collective—set out to build an exhibit that could match the museum’s collection in terms of content, but is also just plain old fun.

“There is nothing like it on the island,” said the museum’s curator and deputy director, Elena Strong. “The playhouse is fun, creatively designed and aimed to encourage family learning and foster an appreciation of our rich local history at an early age.

“Today, children are bombarded with tablets and other high-tech gadgets so we purposefully avoided electronic interactives and sought inspiration from old-fashioned games. However, there is nothing old-fashioned about this exhibit!”

The task of creating a room that was both robust and interactive was a tough one, explained DeMoura.

”It was a pretty big challenge to have something that nobody needed to look after a whole lot. It cuts out a lot of your ideas really quickly. So finding that balance has been great.”
But it was that constraint, along with “trust,” said DeMoura, which allowed him and Cooper to create and design a room they called “the best we’ve ever done.”

“Some of the stories [of Bermuda’s history] can become a little bit repetitive. You see the same stories over and over again. We wanted to try and focus on things kids haven’t heard already, or look at them in fresh ways,” said Cooper.

“I’d say about 75 percent of the ideas we brought forward made it all the way through. Some of the ideas were changed around to reflect the content [of the collection] a bit better. But that’s what design is. You don’t just go off and do your own thing. You don’t get asked to build a couch then come back and say, ‘I’ve built you a tree house. That’s what you really wanted.’”

“[The playground] certainly influenced us. We wanted to do something in here that could compete with it on a visual level,” said Cooper.

“The Museum Playhouse and playground have not only provided a fun, adventurous and educational experience for our local children to connect with Bermuda’s history, but the project also restored a nineteenth-century military building and is a wonderful addition to Bermuda’s cultural tourism and family education resources.”