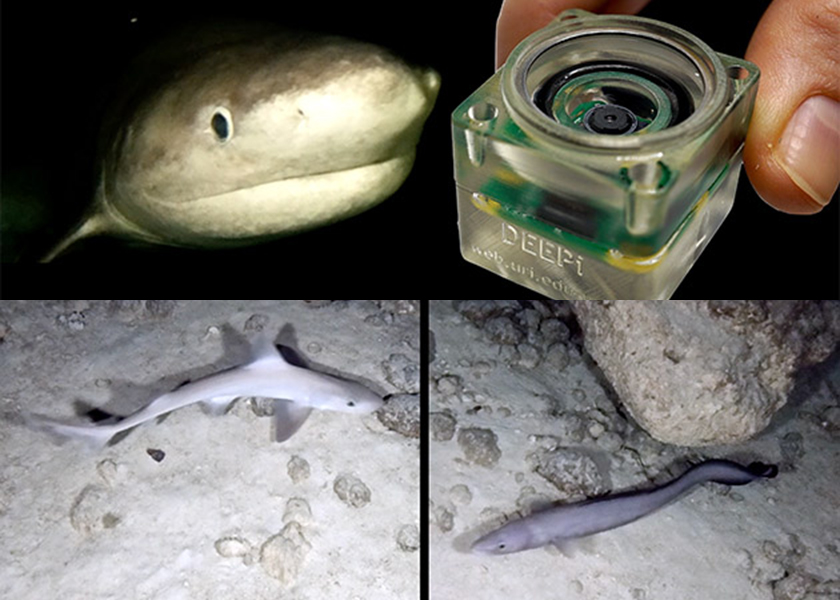 This winter a tiny yet robust Bermuda-tested camera was featured on the cover of the monthly marine sciences journal Deep Sea Oceanography, Part I. Tim Noyes, a research specialist at BIOS, is listed as a co-author on the paper included in the journal.

A Bermuda-tested camera that is so small and lightweight that it can rest on top of a credit card, yet robust enough to withstand pressure from tons of ocean water while capturing video and photos at depths up to 18,044 feet (5,500 meters), has made the cover of the monthly marine sciences journal Deep Sea Oceanography, Part I.

Assistant professor of ocean engineering Brennan Phillips at the University of Rhode Island began exploring the development of a small, lightweight, and controllable camera system, now known as DEEPi, in late 2018. Four months later, after a serendipitous meeting at a Boston conference with BIOS educator Kaitlin Noyes, he arrived in Bermuda to test the camera. Images of the one-inch-by-one-inch (about 25 millimeters square) camera in its housing, as well as a photo of sixgill shark taken during one of six test plunges, appeared in November on the cover to accompany an article titled DEEPi: A miniaturized, robust, and economical camera and computer system for deep-sea exploration.

Tim Noyes, a research specialist at BIOS, is listed as a co-author on the paper. Noyes partnered with Phillips during his BIOS trip, gathering water samples for his research on Bermudian fish communities at the same time Phillips tested the camera.

Typically, deep-ocean cameras are heavy and bulky, with price tags in the thousands of dollars. The housing makes his camera unique, Phillips said; everything except the optical components are nestled, or “potted,” in epoxy to keep from being crushed under pressure. “To be clear, there are other commercial examples of epoxy-potted underwater cameras on the market, but nothing as small or as deep-rated as DEEPi,” Phillips said. “So it’s just a combination of cheap electronics and a new way of making them waterproof and pressure tolerant.”

The camera is capable of recording high-definition video and still images in eight-megapixel sizes, making it the smallest deep-sea camera system available, Phillips wrote in the published paper. The cost of materials is about $100 per camera unit. Since no specialized tools are required to build the DEEPi camera and control computer (parts can be ordered online and the housing is 3D printed), the design is viable for sharing with a broad research and educational community.

Kaitlin Noyes, who directs BIOS’s Ocean Academy, said she knew the camera would be a natural fit for her work with students involved with the Mid-Atlantic Robotics IN Education (MARINE) program. “Learning about the engineering behind the camera and the careers associated with ocean technology is invaluable to our students,” she said. “As a bonus, the students from Clearwater Middle School were the first to see the creatures captured in the footage.”

In addition to deployments in Bermuda, the cameras have also been used offshore Hawaii and in the Baltimore Canyon, a deep trench located about 70 miles (112 kilometers) off the coast of Maryland in the eastern U.S.

“Turns out there’s a lot of cool fun applications for a cheap, tiny, deep-sea camera, so my lab made it a priority to work on it,” Phillips said of the camera’s development path.

This month Phillips received funding to return to BIOS for continued testing for ongoing improvements of the camera systems. He is also writing grants to continue research in hope of developing an undergraduate robotics research course at BIOS.