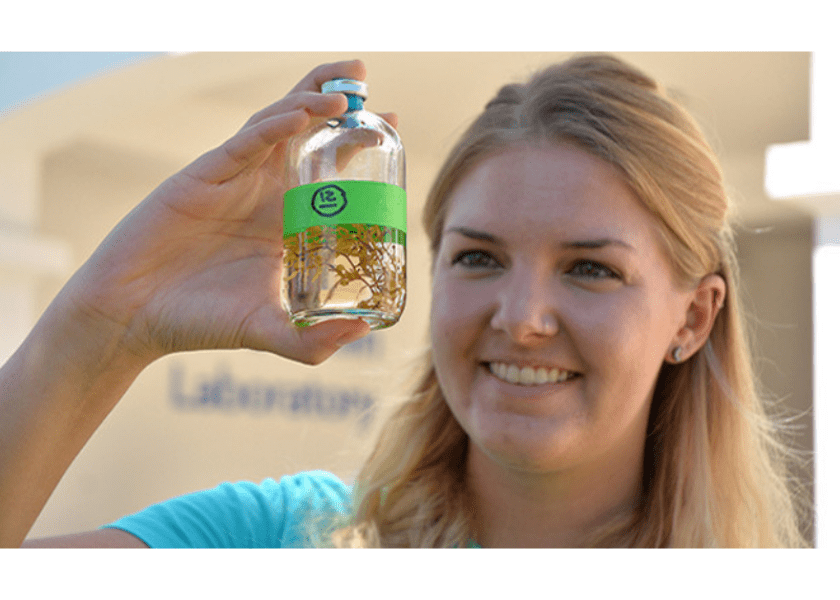 Pictured above: Dani Cox, a doctoral student at the University of California Santa Barbara, looks at a sample of Sargassum, a brown, marine macroalgae. Cox is investigating how the seaweed is able to grow and reproduce so successfully in the nutrient-poor waters of the Sargasso Sea.

Many oceanographers consider the Sargasso Sea to be an “ocean desert,” as high salinity and calm prevailing winds—resulting in lower nutrient supplies—make it a rather hostile place for life compared to other marine environments. For researchers like Dani Cox, a student at the University of California Santa Barbara (UCSB), this raises questions about how Sargassum, a ubiquitous brown algae, not only survives, but thrives.

The Sargasso Sea is home to two unique species of Sargassum that float on the ocean’s surface, often forming extensive mats large enough to be seen by satellites in space. For a sea that lacks land boundaries, these mats serve as important habitat and nursery grounds for over 100 different marine organisms, including sea turtles, eels, and a variety of commercially-important fish like mahi mahi and amberjacks. In fact, within the Sargasso Sea, the seaweed is considered a “keystone species” that defines the ecosystem and supports a high level of biodiversity.

Cox, a native Californian who obtained undergraduate degrees in marine science and geology at the University of Miami, didn’t set out to study pelagic macroalgae communities. Instead, her interest in the subject resulted from, as she describes it, a “hot chocolate conversation” with Dave Valentine, a professor of earth science and biology at UCSB, and Cox’s eventual thesis advisor.

In May 2016, Cox was on a three-week scientific cruise with Valentine and his lab, traveling by research vessel from Woods Hole Oceanographic Institution in Massachusetts to the waters just north of Bermuda. As a first-year student who had yet to begin her own doctoral research, Cox spent much of her time helping other scientists with their investigations. She was put in charge of an instrument used to measure atmospheric methane in the layer of air just above the ocean’s surface.

“One day, as we were in the waters close to Bermuda, I was sitting on the back deck of the research ship with my advisor [Valentine], watching the sunset and having a cup of hot chocolate,” Cox recalled. Looking out at the calm waters, Valentine wondered aloud about how the Sargassum might be nourished and sustained in such a low-nutrient environment.

Given that a number of scientists on the research cruise were already working on projects related to methylphosphonate (MPn) use as a nutrient source, Cox’s first thought was that it might be MPn, which is present in ocean water in very low concentrations as a byproduct of oceanic microbial metabolism. Using the methane analyzer, she conducted a two-day experiment while the cruise was still underway. The initial results looked promising, setting her on a research path for her doctoral thesis.

MPn is a methane and a phosphate group connected by a single bond that is fairly stable. This means that it’s a hydrocarbon attached to a nutrient, but it has to be acted upon by the organism in order to make that nutrient “bioavailable,” or accessible to the organism for uptake and use in processes like growth and reproduction. The key, she says, is finding out the exact mechanism by which Sargassum is able to obtain these nutrients. Cox believes the answer might involve the community of microbes that live on the surface of the Sargassum; specifically, nitrogen-fixing bacteria that break down the MPn compound into its component parts.

From early September through mid-October, Cox worked in outdoor wet labs at the Bermuda Institute of Ocean Sciences (BIOS) conducting time-series experiments. By studying one variable repeatedly over a period of time, she hoped to elucidate the symbiotic relationship between the microbes and Sargassum.

Using a collection of specimen tubes—each containing a clump of Sargassum, some seawater, and a bit of air—Cox tracked the Sargassum’s production of methane, which is directly related to MPn. For each time-series point, she took a sample of air from each tube and processed it through a methane analyzer, providing her with insight into how MPn is being used by the miniature ecosystems within the tubes.

After the measurements were processed, Cox retained the samples of water and Sargassum for future studies once she is back at UCSB, including genetic analyses to identify specific microbes. She will also be exposing the Sargassum to various antibiotic treatments to determine how the seaweed’s growth is impacted if microbes are removed from its surfaces.

Cox, who has always liked the puzzle-solving aspect of research, enjoys putting her experimental planning into action. “I’ve literally been sitting at my desk for the past year thinking about these experiments and figuring out how I can determine the ‘whys’ and ‘hows’ of what’s happening,” she said. “It was the best feeling ever when I got the data from my first time-series and it actually showed something. I was so happy I was literally crying and texting my mom about how happy I was.”