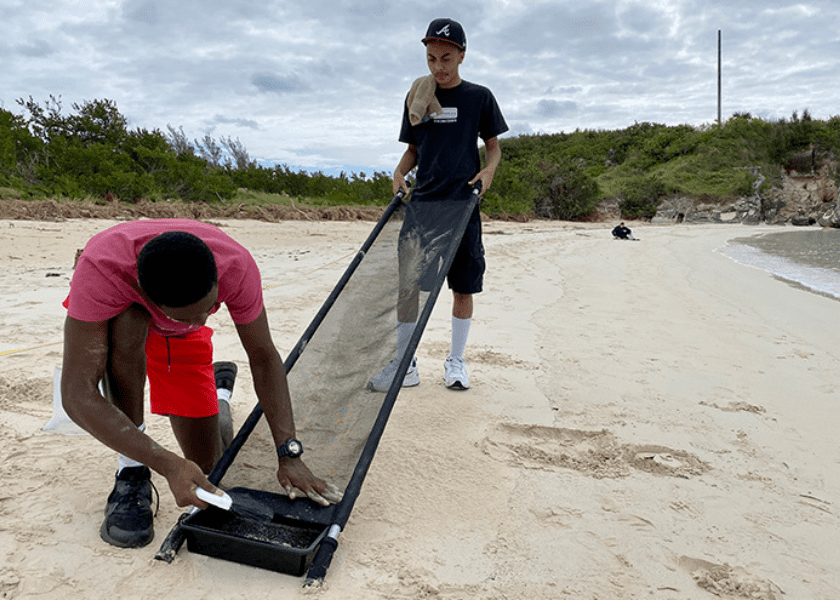 When the ongoing pandemic scuttled Maya Leighton’s plans this fall to attend a university overseas, she instead enrolled for a year at Bermuda College. There, a professor noted Leighton’s commitment to marine sciences and suggested a unique opportunity. How about spending Saturdays at BIOS, learning about coral reefs, marine microplastics, plankton, and mangrove restoration on island?

Some Saturdays they sifted coastal sand for microplastics, then identified the size classes of the plastic fragments. Other days they catalogued and repotted mangrove saplings, or collected mangrove propagules from Walsingham Nature Reserve. They also deployed and recovered plankton nets, and learned about the island’s native corals while working on an ongoing project to catalogue reef species. This project benefited not only the Institute but also ongoing research at the Living Reefs Foundation.

Leighton, 18, who graduated valedictorian from Mount Saint Agnes Academy in 2020, called the two-month experience “extremely valuable, because I believe no time should be wasted. Personally, I feel it beneficial to fill as much time as possible with experiences, like internships, in order to help with future endeavors, such as applying to a university, getting a job or working with scientists,” she said. The internship affirmed her marine science study plans, which she said she hopes to continue at a university in the U.K. in the fall of 2021.

The program, informally known as the Ocean Academy Saturday Intern Program, was the brainchild of Smith and Kaitlin Noyes, BIOS’s director of education and community engagement. They reached out to administrators at the island’s two public high schools and Bermuda College to identify students keen on studying marine biology, but stymied by the pandemic.

“This year has been a circus for students, upending their higher education plans, so we put our heads together to figure out how we could provide a program that could give them some meaningful laboratory and field experience,” Smith said. The program was funded as a component of the BIOS Curriculum Enrichment Program, which includes a consortium of financial supporters (including the Centennial Foundation, a supporter of BIOS’s work in public schools).