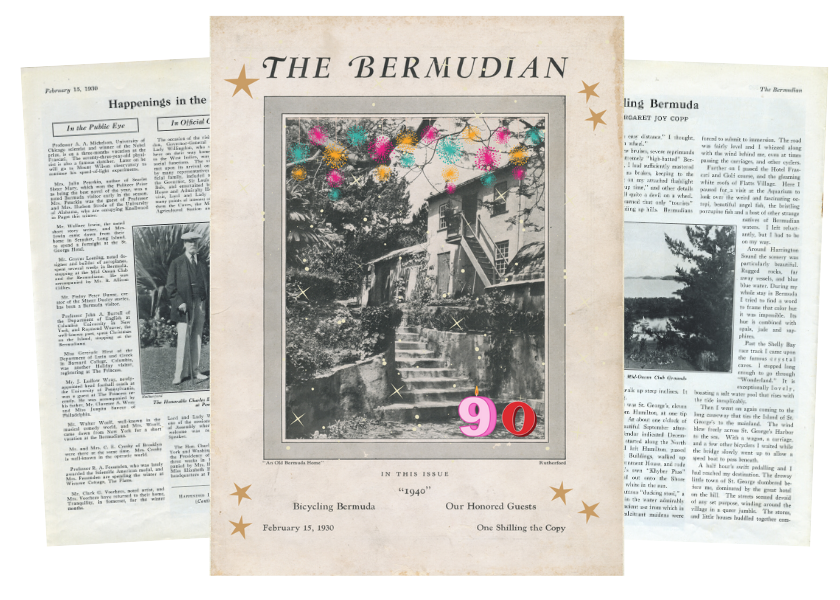 This Saturday, The Bermudian magazine will officially be 90 years old!

The first issue, published on February 15, 1930, introduced The Bermudian as “A magazine dedicated to Bermuda and Bermuda Life,” and by that standard not much has changed.

Back then, the price per copy was one shilling or 25 cents and you could buy an annual subscription for ten shillings. Their offices were listed on page 5 as the Bank of Bermuda Building in Hamilton and, interestingly, 331 Madison Avenue, New York.

William D. Richardson was the founder and editor of The Bermudian but he would remain at the helm for only one year, to be replaced by Ronald “Ronnie” Williams who would go on to be the editor for almost 40 years in total. Under his guidance the magazine became a polished reflection of Bermuda for the outside world, appealing largely to American tourists.

The premier issue of The Bermudian was filled with bits of news and information, such as Town Hill on Harrington Sound is the highest point on the island, plus a sporting calendar and some facts on island life for the tourists. There was to be a railway built in Bermuda at some point, but no one is certain when. And there were also some snippets of historical interest, such as the fact that Communion Service at St. Peter’s was first held in 1684. There is news of events and happenings over the past few months (politics included) and lengthy coverage of well-known visitors and socialites and where they are staying. Photographing tourists at their hotels was a trend that would continue in The Bermudian for about 30 more years!

The major articles included a futuristic piece, entitled simply “1940,” and “Bicycling Bermuda” by Margaret Joy Copp, a wonderful account of Copp’s visit to Bermuda where upon arrival she purchased a second-hand bike for 25 pounds and spent her entire vacation on a “private discovery,” sightseeing the entire island by pedal bike.

The first big advertisers in February 1930 included the Bermuda Trade Development Board; Chris-Craft (as in mahogany boats), which was selling its latest small boat, the 1930 Sportscar; the Bermuda Hotel Association; H. A. & E. Smith; Munson Steamship Line and Ludington Airline Incorporated.