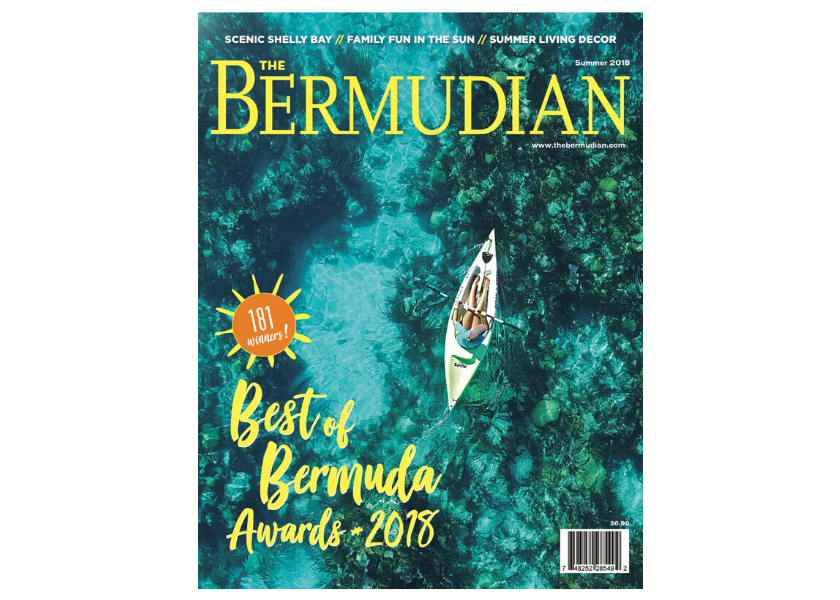 The winning cover was photographed by Andrew Stevenson and designed by Linda Weinraub and Laura Bell. Of the cover, one judge said, “This is a very fun and lively cover. I love the overhead shot, the bright yellow type and the placement of the cover lines. The whole package adds up to a sense of “I can’t wait to dive into this magazine.”

In addition to the Gold Award, The Bermudian also received a merit in recognition of W.C. Stevenson’s profile on Emily Nagel, entitled “Right Time. Right Place. Right Attitude.” The judges cited Stevenson’s profile as a “well-rounded piece, [with] strong writing and follows the conventions of a profile closely.”

IRMA members include publications from across the United States, Bermuda, and Canada. The awards were granted for work published in 2018, and judged by independent panels of experts. Editor and publisher, Tina Stevenson and digital editor, Gabrielle Boyer were there on behalf of The Bermudian to accept the award.

IRMA is a non-profit association composed of 28 regional magazines from across North America. Since its founding in 1960, IRMA has provided an unparalleled environment for open communication, support and trust among member magazines.

IRMA’s mission is to strengthen the regional magazine publishing industry by fostering the free flow of information and experience between a diverse group of non-competitive publishers. Through this limitless sharing of ideas and experience, IRMA helps the regional genre of magazines maintain relevance and viability in their respective markets.

To evaluate the achievements of member magazines, IRMA annually selects a panel of industry experts from outside IRMA who choose winners from the pool of submitted entries. The various award categories include editorial, design, and photography. Example categories include Reader Service Article, Photo Series, Art Direction of a Single Story and Magazine of the Year.