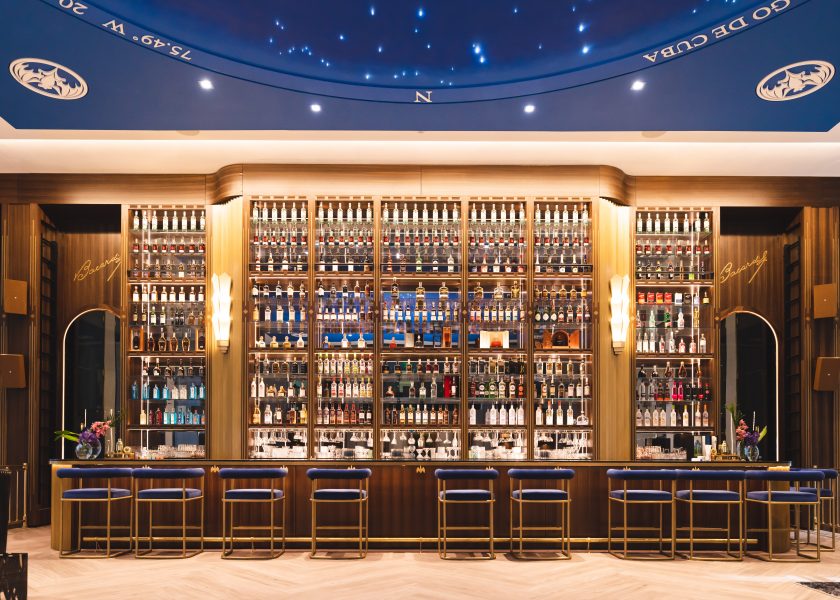 Shaking Up the Future

Bacardi Bermuda builds a two-story bar where they hope to foster connections and train the next generation of industry greats.

Bacardi has called Bermuda home for 57 years and the family-owned drinks giant’s bond with the island has never been stronger. The spectacular, new two-storey bar at Bacardi’s iconic global headquarters on Pitt’s Bay Road is intended to build the relationship further.

Behind the 1862 Cocktail Bar, named in reference to the year Bacardi was founded by Don Facundo Bacardí Massó in Cuba, is a floor-to-ceiling display nearly 20 feet high which features Bacardi’s entire spirits portfolio. With about 200 brands, including Martini vermouth, Dewar’s Scotch, Patron tequila, Grey Goose vodka and Bombay Sapphire gin, the bar is testament to the international expansion the company has achieved from its Bermuda platform.

Bacardi fled Cuba after its assets were seized by Fidel Castro’s Communist regime, which took power in 1959 after ousting military dictator Fulgencio Batista in the Cuban Revolution. After first moving to the Bahamas, Bacardi decided to relocate to Bermuda in 1965 in search of greater political stability. Since then, the company has blossomed into the world’s largest privately held spirits company.  As the employer of about 80 people on-island, Bacardi’s connections with the community already run deep. Furthermore, the company has a track record of excellence as an employer — it features on the latest Forbes list of the World’s Best Employers and in July gained the “Great Place to Work” certification, which recognises employers who create an outstanding employee experience.

Douglas Mello, managing director of Bacardi Bermuda, believes that the 1862 bar, as a place to “foster connections,” will further strengthen the company’s Bermuda ties. “The overall ambition for 1862 is to serve as a classy, unique space for the Bacardi team and the community to come together to share in our purpose, which is to make moments matter,” Mello said. He explained why the venue will be restricted to invitation-only events and not available for hire by companies or residents. “We’re not competing with our vendors and our partners in the industry — that’s not the intent,” he said. “We will primarily be working with our philanthropic partners to help them with their costs on the island by creating curated experiences here for them.”

The bar will also be used as the site for a programme known as “Shake Your Future,” which Bacardi has already rolled out in several other countries including France, Spain, Italy and South Africa. Mello explained: “It’s a free, skills-based training programme for young unemployed adults, to help them begin a successful career in the hospitality industry as the bartender.

“It’s designed to train the next generation of bartenders from the community. We’re also looking to work with industry partners to provide opportunities in a work placement programme.” The first five-week programme is scheduled to start on January 16 and run through February 24. The second programme will run from March 13 through April 21. Prerequisites for participants include being of legal drinking age, unemployed, fluent in English and motivated to build a career in the hospitality sector.

While being forever proud of its Cuban roots, Bacardi’s relationship with Bermuda has grown ever more solid over the decades. “Bacardi was one of the first exempted companies to incorporate in Bermuda,” Mello said. “The company chose Bermuda for its stable environment, commercially sound infrastructure and proximity to the US east coast and to Europe.

“The office in Bermuda at that time became a geographical bridge between Europe, where Bacardi wanted to expand, and the US, where it was already present. The time zones, the location, the ease of access, all worked in favour of Bacardi being based in Bermuda.

“Since that time Bacardi has further diversified through acquisitions of iconic brands across spirits categories. And today, the reasons why Bacardi originally relocated to Bermuda are still valid.”

An additional benefit of being Bermuda-based are world-class events that offer brand-showcasing opportunities for Bacardi. Mello highlighted the America’s Cup and SailGP sailing events, the island’s annual PGA Tour golf tournament, and the World Triathlon Championship Series events as prominent examples. “Bermuda has been Bacardi’s home since 1965 and will continue to be our home for the foreseeable future,” Mello said. “We will continue to work to have a positive impact on our community and our environment, now and for years to come.”