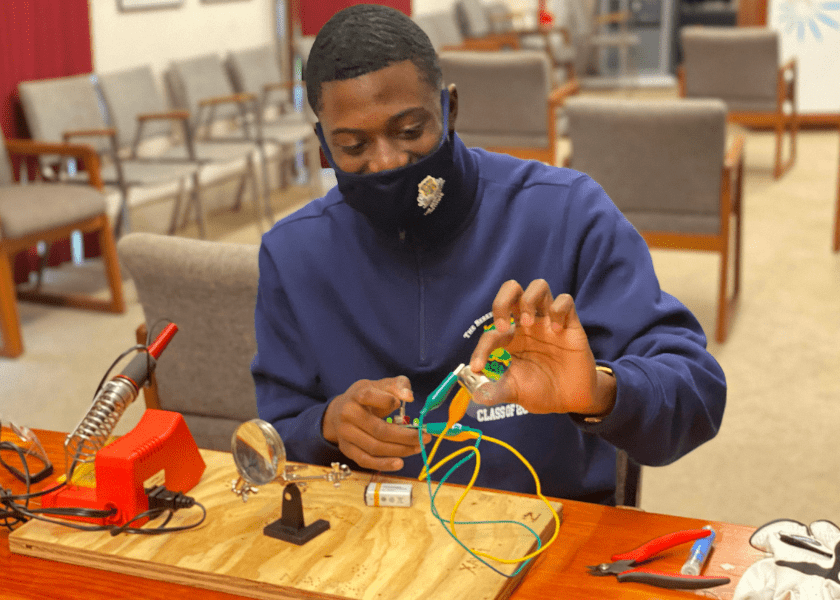 Students at The Berkeley Institute Benefit from New Collaboration

When Quincy Paynter, deputy principal at The Berkeley Institute—a public senior school in Bermuda—wanted to provide his students with team-building experiences that would also highlight key scientific concepts related to electives offered at his school, he knew where to turn: the BIOS Education Department.

“Our partnership with BIOS bloomed a number of years ago from a series of workshops that were offered for teachers during October mid-term breaks,” Paynter said. The first workshop he attended included exercises with building and constructing remotely operated vehicles (ROVs) that were field tested on the waterfront at BIOS.

“I absolutely loved the course content,” he said. “Since then, I’ve used my administrative influence to encourage students at The Berkeley Institute to engage in all that BIOS has to offer.”

Kaitlin Noyes, BIOS director of education and community engagement, is familiar with the curriculum at The Berkeley Institute, as well as the school’s interest in the building a robotics program and competing in the annual MARINE ROV Challenge. She suggested robotics as a theme and reached out to partners at the Bermuda Underwater Exploration Institute (BUEI) and ConnecTech, a local technology training center, for additional expertise.

“The collaboration allowed us to provide The Berkeley Institute with access to hands-on experiences in electrical, mechanical and computer engineering all within a single workshop,” Noyes said.

During three days in February and March, 43 students and three teachers took part in a day-long workshop at BIOS. Each day, students rotated between three 45-minute interactive sessions held in different classrooms. This gave partner institutions the opportunity to create “mini-workshops” that engaged small student groups in a variety of activities designed specifically for them.

Noyes led a soldering workshop in which students wired circuit boards, such as those used to operate robots, autonomous underwater vehicles (AUVs, such as gliders), and ROVs. Students learned to solder and wire the circuit boards to power fans and buzzers, skills that are used to build ROVs for the MARINE ROV Challenge. Additionally, soldering techniques are required in elective courses at The Berkeley Institute that allow students to obtain electronics certifications.

Julie Steele, head of education at BUEI, led a workshop on buoyancy and refraction that presented challenges in neutral buoyancy in water with varying amounts of pressure using a variety of simple materials, including pipe and foam. This illustrated concepts in physics, such as density and its effects on mechanical design, which are important considerations in an underwater environment.

“This workshop allowed us to share some of Bermuda’s history in deep sea explorations and provide context for the challenges that can be overcome with engineering and robotics technology,” Steele said.

This workshop provided a tie-in with one of the more popular elective courses at The Berkeley Institute: marine science. For the last two years, seniors in Alshia Lugo’s Marine Science II class have had the unique opportunity to obtain their SCUBA diving certification as part of the course. SCUBA diving relies on one’s ability to control buoyancy through a variety of factors, including weights, wetsuits, and the inflation and deflation of a buoyancy control device (or BCD) while underwater. An understanding of neutral buoyancy is key to a successful diving experience.

Chloe Baron, a coding instructor at ConnecTech, led a robotics and coding practicum that explored the concept of autonomous vehicles by teaching students the basics of how to code movement and program sensors onboard the vehicles. Students spent time coding their own programs using a virtual robot in a maze and had hands-on experience with miniature obstacle-avoiding robots.

“Introducing young adults to computer programming and its role in all aspects of our modern world is essential to us at ConnecTech,” Baron said. “In these workshops, the students were enthusiastic about learning how to program sensors that allow robots to ‘see’ and use the feedback to make ‘decisions.’ Seeing pride and determination in our young people when it comes to technology is hugely motivating!”

For Paynter, the coding workshop “spoke to the school’s desire to reignite interest” for seniors and underclassmen in the robotics elective classes, which not only allow students to solve real-world problems and compete in local challenges, but also prepare them for future technology-based careers.

Among the 43 students in attendance in February and March were the school’s senior leadership students, or prefects. Paynter wanted to offer them additional team-building and bonding experiences outside of school.

Head Boy Andreaz Glasgow, 18, said the workshop gave him the opportunity to engage in meaningful discussions with community partners with regard to coding, science, robotics, and engineering.

“We spent the day with our peers building upon our friendships and fostering a team spirit,” he said. “This opportunity is one of the many that The Berkeley Institute provides for its future leaders.”

Paynter said he is keen to support similar offerings for senior students at The Berkeley Institute next year.

“The most engaging aspect of the workshops for our students was working together in lab sessions to understand the nature and the role of science in our local and global societies,” he said. “I found that the awakening of interest within students is one of the most important aspects of this experience for them.”