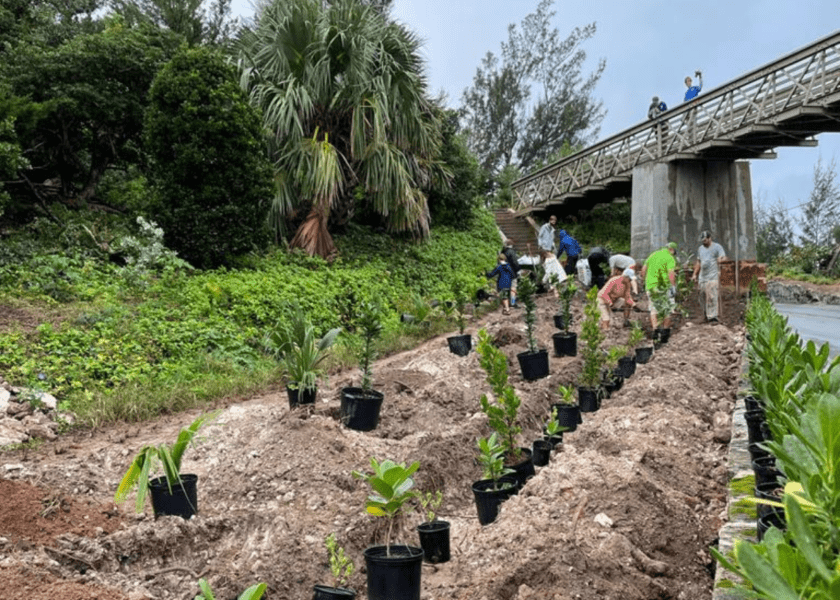 One of the newest projects from the Bermuda Zoological Society is a pilot programme focussed on restoring endemic Bermudian plant life. The BZS Micro Forest Project aims to have volunteers both young and old plant native Bermudian flora to reduce Bermuda’s carbon footprint. The project was developed with backing by RenaissanceRe and the Department of Parks and is seen as building off of the Trunk Island Living Classroom. The project also aims to restore parts of the precolonial environment.

According to a spokesperson for the project, “The BZS Micro Forest Project involves volunteers from the community planting dozens of native species best suited to the local environment in the same area. It can fit into a backyard, school playgrounds, roadsides or public parks and quickly develops as a natural forest, becoming maintenance-free after the first three years.”

The project was based on the Miyawaki Forest model which encourages the growth of trees and forests even in the smallest areas of land, acting as a carbon sink where these forests can remove carbon from the atmosphere continually as they grow. By focussing on endemic species, the BZS also hopes it can help fight against invasive species of plants. “Bermuda’s endemic species, only found on our little rock, are dwindling in comparison to the invasive, exotic species imported from overseas.

“By clearing sections of land dominated by invasive species and replacing them with a diverse mixture of native-compatible and endemic plants, we not only create a dense forest of local plant life, but also contribute to the spread of seeds from Bermuda’s own iconic, rare and beautiful flora.

“The diverse species of plants produce flowers, and therefore pollen and seeds, which are then dispersed by birds and pollinators to spread seed stock to the surrounding area. The native and endemic plants drop debris that slowly alters the soil composition to recreate a pre-colonial Bermuda soil, this benefits the subterranean insects and networks of mycelium that are extremely important.”

While the pilot programme is still in its early stages, it has already seen success. Most notable was when over five days last November volunteers cleared the railway site on North Shore Road and in its place planted various trees and plant life. “A 114-square-metre section of land dominated by cane grass transformed to the early stages of a micro forest with 214 plants of 13 different native and endemic species planted.” Possible future locations are already being discussed.

Warwick Park Playground is one of the locations that has been considered as a possible site for the project in the future. “As casuarinas have dominated the tree line for decades, it is time for a change in scenery. With the casuarinas having served their purpose as a valuable windbreak in place of the Bermuda cedar after the blight of the 1940s, the large, introduced trees have become invasive, cumbersome and now a danger in high winds. Almost a century later, the cedar has shown a strong resistance against the scale insect which caused the blight and deserves its place as a wind barrier once again. As the playground is well-used by the public, there will be opportunity for the community to enjoy the micro forest as well.”

In addition, one of the key aspects of the pilot project lies in how it can involve youth with the push for environmentalism and protecting Bermuda’s biodiversity. By doing so, the hope is that the tools and knowledge needed to preserve the environment can be passed between generations. “During the clearing and planting process, the vocational skills and knowledge create a lasting impression. Stepping away from screens to get familiar with garden tools while planting trees is essential for all kids to learn, but we find these moments are becoming rare in today’s world.

“Most importantly, species identification changes the way you view a park, a nature reserve or the common hedge in your backyard. Understanding which plants help or hinder the health of an ecosystem and learning how to combat invasive species pressure, like that of cane grass or Brazil pepper, are skills most residents of Bermuda wish they had the opportunity to learn at a young age.

“As the BZS Micro Forest Project matures, there are plans to integrate analysis of plant growth and other aspects of the micro forest into our education programmes. The BZS envisions multiple micro forests on school grounds for both study and leisure. From primary to college level, students can benefit from learning about the plants, animals and insects that micro forests attract. Those that help with the planting will have the added benefit of a lifetime of watching the forest grow and flourish.”