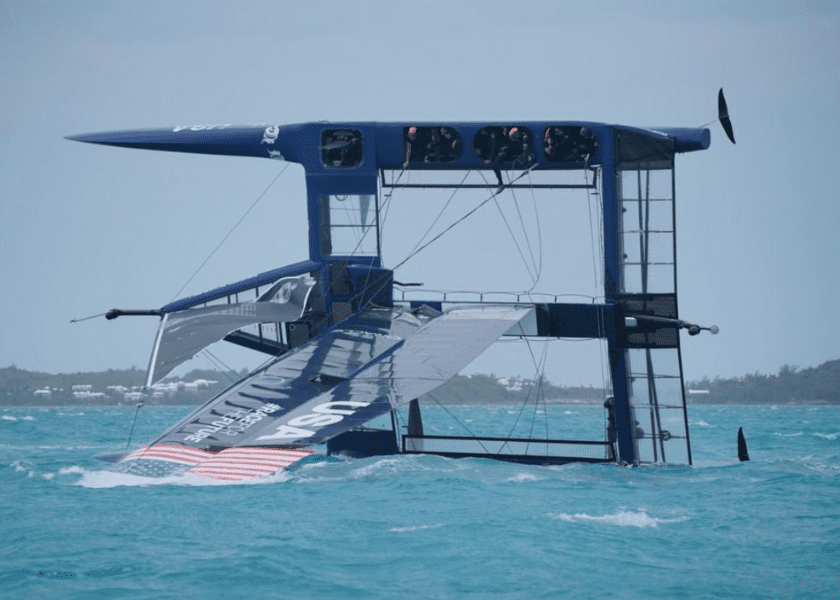 The Landlubber’s Guide to SailGP: Uncle Covid Ruins the Party

As the sporting world reels in the aftermath of the breakaway European Super League for allegedly “leading” football clubs in Europe, another breakaway league readies to kick off its second season.

It’s been an eventful few weeks in the run-up to the SailGP season opener here in Bermuda on April 24-26, one filled with drama on and off the seas. Here’s a breakdown of everything you need to know.

Lockdown: what it means for spectators, and SailGP’s value to the island
Topping the headlines was the news that spectators won’t be allowed on land, while plans for officially chartered spectator boats have also been scuppered. However SailGP chief executive Russell Coutts remained optimistic that live spectators might still be able to catch the action.

“I’m hoping that we will be to have at least on-the-water spectators, even if there is limitations in the boat and so forth,” he told Colin Thompson of the Royal Gazette.

“Everyone knows that this is a fantastic venue and just the images going out to various other markets effectively showing that Bermuda is open, I think, is a great message to get out there as well.

“Clearly all the best sailors are here and the sailing world and sports fans are really switched on. There’s a lot of interest in it.”

Barring any in-person spectators, you’ll be able to watch the racing on CBS Sports. In Britain, Sky Sports will be carrying coverage. Coutts reiterated the impact that coverage will have in showcasing Bermuda.

“We are broadcasting in 175 different territories so I think that there would be great images coming from Bermuda,” he said.

“But even if we can’t do that, in terms of the television delivery, it’s still going to be a spectacular race in a spectacular, natural environment. So from that point of view, I don’t think the racing itself is going to be compromised, but clearly it would be awesome if we can get fans out on the water to see it.

“Then in terms of the inshore facilities, we’re clearly not going to be able to have bleachers seating or anything like that.”

“It will still be pretty easily viewed from the shore, but no doubt the Government will have rules around how many people can congregate in one area.”

As for how the lockdown order will effect the economic impact, despite the COVID-modified estimated impact, he still believes the event will still show its value.

“I know that the economic impact will certainly be five to ten million dollars.

“Typically our events exceed $20 million and I think they average around $23 million in economic return. But clearly we’re not going to have that sort of return in this Covid rich environment, so let’s call it $5 million to $10 million.”

Status of Team Australia’s F50
The lockdown order was untimely for all, but especially the Australians, whose F50 is expected to launch today, just four days before racing begins. As of last week, electrical systems had been fully installed, according to Coutts, and hydraulics were functioning.

“The platform is in its full assembled state and the next stage is to get the foils in. Then they need to put the foils under the boat and do those calibrations and start to check the control systems and so forth that operate the foils and the rudders,” he said.

“The plan, if all goes well with those checks, is to commission the wing sail on Monday on actually one of the other platforms.

“And then Tuesday the New Zealand boat will be launched. Provided the wing test and everything go well on Monday, it will have its full wing and platform sailing on Tuesday.”

“They’ve all got the restrictions in terms of how long they can work for the Covid protocols, so we are working within those boundaries,” Coutts said.

“We can make this work. It’s very, very tight and clearly if something goes wrong with the sea trials we would need to really push hard to make sure we respond well.

“But I’m not excepting anything major to get in our way. This is the eighth boat that we’ve commissioned, so we are hoping that it will all go well and they will have ironed out any bugs by the time racing starts.”Should everything go according to the script, Peter Burling, the Team New Zealand helmsman and CEO, and his team-mates will only have four days to practice in the one-design F50 before they make their SailGP debut.“It doesn’t give them a lot of time,” Coutts said.

High drama on the high seas
With their F50 out of commission, Team AUS were graciously gifted the keys to Team USA’s boat for some training that soon went awry. Helmed by Team Australia’s CEO Tom Slingsby, a new 18-meter wing was blamed for a spectacular capsize.

Kinda like that time you borrowed your mom's car and *really* hoped she didn't notice that scratch.

Except the car is an F50 and the scratch is a little more noticeable😅 https://t.co/S7STLgx2XW

“We were training on the USA Team’s F50 when the capsize happened, and I’d say we were sailing in the upper wind limits for these boats,” said the Olympic and America’s Cup champion.

“We were using the new 18-meter wing, which has a few different operating ways. It was our first time using this wing and we did make some errors which have not been an issue in the past and were highlighted today in extreme conditions.”

“It was definitely an adrenaline-fueled start to the session and capsizing when going that fast was definitely pretty scary. But I’m just glad everyone is safe and the damage to the boat is minimal.”

“I guess this experience just highlights why it’s so important that we are able to test these boats and the new technology out before the Bermuda event,” Slingsby said.

“We did a safety session in the water and did a capsize recovery session before we hit the water, so our safety protocol went very smoothly in righting the boat.

“We’re very grateful to the safety teams and the USA shore team for getting us safely back upright.”

With everyone found to be safe, it didn’t take long for the jibes to come, with SailGP’s official twitter account commenting: Kinda like that time you borrowed your mom’s car and *really* hoped she didn’t notice that scratch. Except the car is an F50 and the scratch is a little more noticeable.”