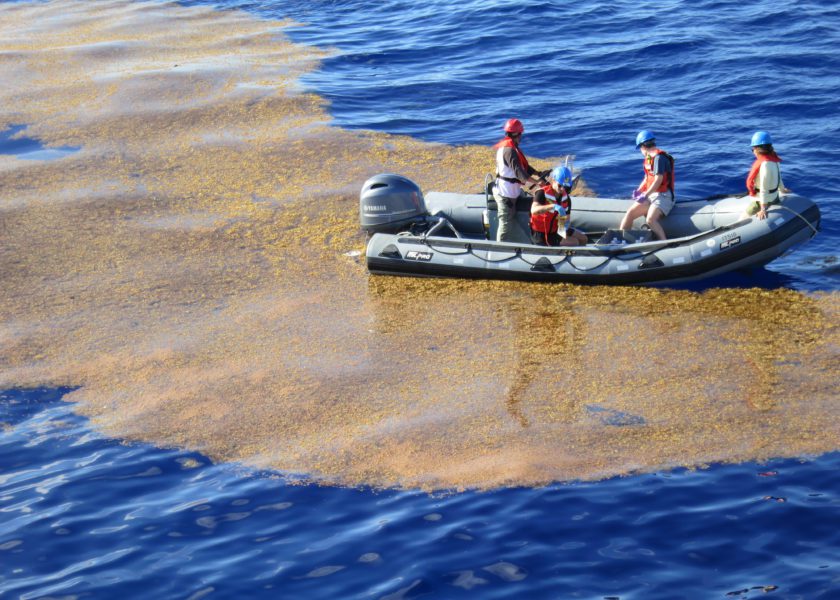 The Synergies of Sargassum Seaweed

BIOS-SCOPE Scientists Investigate a Marine Brown Algae, from the Microbes on its Surface to the Role it Plays in the Global Carbon Cycle.

In early August, a team of researchers with the multi-year, multi-institutional BIOS-SCOPE (Bermuda Institute of Ocean Sciences – Simons Collaboration on Ocean Processes and Ecology) program completed their seventh research cruise aboard the BIOS-operated research vessel Atlantic Explorer. For four days, 13 scientists from eight institutions came together to study the unique microbial communities that develop in the Sargasso Sea during the summer, as well as the dissolved organic matter (DOM) they produce, consume, and redistribute throughout the water column.

DOM consists of materials, including carbon compounds, that result from the biological production and decomposition of organic matter (algae, microbes and animals) in the ocean. In the Sargasso Sea, where nutrients are limited due to high temperature, low mixing, weak currents, and calm winds, DOM is tightly recycled throughout the ecosystem.

“The BIOS-SCOPE program, now in its sixth year, is working to identify the components of DOM, as well as their relative concentrations, to help understand the influence of these compounds on ocean chemistry and the ecology of the marine microbial community,” said Craig Carlson, a professor at the University of California at Santa Barbara (UCSB) and BIOS-SCOPE program director.

Sargassum: The Seaweed that Farms its Own Nutrient Supply

Sargassum seaweed is one of the producers of DOM in the Sargasso Sea, which was named after the floating golden-brown algae that accumulates in mats on its surface. Despite the nutrient-limited waters in the region, Sargassum is able to thrive and provide important habitats, spawning areas, migration pathways, and feeding grounds for hundreds of marine organisms, including many endangered and commercially important species.

How? Scientists believe one mechanism are the microbial communities, or microbiomes, that lives on the surface of the Sargassum. Bacteria in the Sargassum microbiomes have an enzyme that can degrade a compound called methylphosphonate (MPn) into its two constituent parts— methane gas and phosphate—leaving the phosphate available for use by both the bacteria and the algae. Phosphate is a limiting nutrient for Sargassum, and it is readily taken up by the plant for growth and reproduction.

But that’s only part of the story. BIOS-SCOPE intern Zoe Skinner, 19, is spending nine weeks this summer continuing research she began in 2020 as a Bermuda Program intern under the guidance of BIOS research specialist Rachel Parsons. In a series of laboratory experiments, Skinner looked at how microbes responded to DOM produced by Sargassum in the presence and absence of MPn. Early experiments showed that microbial growth was highest when both MPn and Sargassum DOM were present. To investigate this further, she conducted a set of experiments designed to look at the response of ocean microbes to Sargassum DOM in the presence and absence of both MPn and a nitrogen source (ammonium).

“The results from the study showed that marine microbes need MPn to grow on Sargassum DOM,” Skinner said. “Essentially, Sargassum is acting as a carbon food source for the bacteria that, in turn, provide phosphate back to the Sargassum.”

From the Sargasso Sea to Earth’s Carbon Cycle

In addition to providing critical ecosystem services in the Sargasso Sea, Sargassum—along with other macroalgae, such as giant kelp—plays an important role in the global carbon cycle. As it grows, the algae remove carbon dioxide from the atmosphere through photosynthesis, and a certain amount of the algae resists degradation over time, effectively sequestering, or trapping, the carbon in their tissues. But a number of questions remain: What is the rate at which the dissolved organic carbon (DOC) is released from the algae? How much of the DOC fuels microbial ecology in the water column? How much of the DOC resists degradation? If the DOC is being consumed, what types of microbes are eating it?

Chance English, a doctoral student in the Carlson Lab at UCSB is investigating these questions as part of the BIOS-SCOPE program.

“There’s a lot of buzz around macroalgal DOC as a potential carbon sequestration mechanism,” Chance said. “However, the capacity of DOC to be degraded can depend on several factors: its chemical structure and concentration, ambient nutrient concentrations, and the metabolic potential of the resident microbial population. With these preliminary experiments, we hope to start to untangle what might control the turnover of DOC produced by Sargassum.”

Earlier this summer, in June, Carlson and Parsons conducted a short series of experiments to determine how much DOC is released by Sargassum. Afterward, they worked with English to develop a method of labeling the Sargassum tissue using a stable isotope of carbon (a heavier form of carbon that contains an additional neutron). Because Sargassum uses carbon during photosynthesis, the heavier carbon also gets taken up and acts as a tag that scientists can trace or follow into the organisms that consume the Sargassum DOC. Using this method, Parsons and BIOS research technician Kevin Yongblah harvested the DOC produced by the algae after a few days and shipped it to English at UCSB who isolated the labeled DOC, extracted it, and brought it back to BIOS in August for the BIOS-SCOPE cruise.

Armed with this labeled DOC, English and Carlson took it out to sea for a series of experiments to see what marine microbial organisms ingest it. Since the DOC is labeled, whatever organisms ingest it will incorporate it into their DNA, allowing them to be identified later through genetic sequencing. On board Atlantic Explorer, about 50 miles (80 kilometers) southeast of Bermuda, they collected water from two depths, 30 feet (10 meters) and 650 feet (200 meters), and brought it aboard the ship where they added the labeled DOC to the water.

“The idea behind structuring the experiment this way is that the DOC was originally produced at the surface by the Sargassum, so we want to know what eats it at that depth,” English said.
“But during winter months, mixing events transport the DOC to deeper depths where other microbes would have the opportunity to eat it, so we also want to identify those organisms as well.”

And, because the populations of bacteria are structured differently over depth, they might use different forms of the carbon based on their unique metabolisms. Some carbon is more available for use by living organisms (called labile) and some resists degradation and is less available (called recalcitrant). Carbon that resists degradation longer has a greater potential for carbon storage as it is mixed into deeper waters.

Carlson notes the Sargassum experiments on the August cruise are a pilot, but that “we already have a lot of preliminary data to guide the right design” for the final study, which will take place on a subsequent BIOS-SCOPE cruise, likely later in 2021 and 2022.