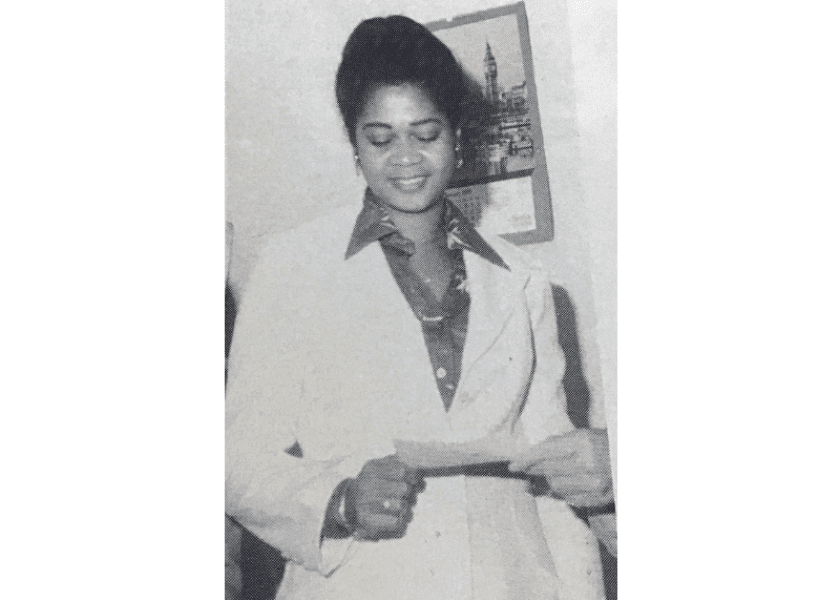 This article was take from our archives. It first appeared in the March 1980 issue of The Bermudian magazine. It appears here exactly as it did originally.

An attractive woman sits at home cradling her seven-week-old baby and talking to him as though he can comprehend every word. Enter her seven-year-old daughter, all cuteness and bows, whose fad of the moment is needlework which she intently gets on with.

The picture of sublime domesticity? The thumb nail sketch of a housewife with more than enough on her plate that there is no need to ask what else is happening in her life?

Not in Olga Scott’s case. It was Friday evening and she was looking forward to Monday when she would return to her Hamilton office at Youth, Health, Education and Development (Y.H.E.D.) which she has headed since its inception 14 years ago.

She had been away from work for 12 weeks while young Lawrence Scott gets established in the world. He and his sister Robyn, Olga smilingly describes as “the start and the end.”

But this is not to denigrate her motherly duties. For children are her work and her life. When she came to Bermuda in 1967 to start Y.H.E.D. she knew she would be tackling one of the most daunting problems amongst the island’s youngsters.

So multifarious are the Department’s activities that it is difficult to pigeon hole them with one glib phrase. Jamaica-born Olga elucidates: “We deal primarily with school age parents, the sexually active teenage girl as well as the young man. We are a family planning educational service.”

Of course, these enlightened times have provided Y.H.E.D. with more than enough work. It was set up in the first place, says Olga, because there was a need to reach the adolescent, and the need is “continuing rather than growing.”

Olga attended high school in Jamaica and then went onto South Dakota State University where she majored in psychology and minored in English. After four years she went to New York State where she worked and went to graduate school part-time. In all, she spent five years in the States, in social and welfare work.

Women are traditionally sensitive about their age and Mrs Scott is no exception. Asked how old she was when she went to America she smiled: “I’m not going to tell you my age if that is what you are trying to figure out. I am still under 65.” It was not for nothing that she got her psychology degree.

Single, and somewhere in her twenties, she got the job of setting up Y.H.E.D. and in 1967 took the big step of coming here alone.

“It was not that it sounded a glamourous place to come to,” she said. “I had never been her before but had heard about Bermuda’s racial problems. It was more the challenge of starting the programme. That is what really appealed to me. It has continued to be a challenge over the years.

“Having been born and grown up on an island, I had no difficulty in adjusting. I am not an adventurous person, but I came on my own. I have no regrets.”

Olga found that racial problems still existed when she arrived. For her they were manifested when she went house-hunting. White landlords turned her down and a black landlord, she says, was forced to rent to whites. But after six weeks, she found somewhere.

Nevertheless, Y.H.E.D. got off to a flying start run solely by Olga and a Canadian woman. Now staff has grown to include five full-time workers and five part-time. At first the Department operated on private donations, but after two years Government started to carry out the good work and will this year hand over about $150,000.

Olga believes they will need every cent. For out of the amount staff have to be paid and various programmes taken care of.

“We have part-time staff because we have an educational programme for pregnant school girls,” she said. “We find that part-time teachers are a better arrangement for this. They can deal with a wider range of subjects.”

New ways have to be found of reaching the younger generation. Referrals reach her office in Cedar Avenue from a number of sources. “Doctors, nurses, teachers, parents – you name it,” she said. “If a girl is pregnant, she can come to us for her education during the time she is pregnant. She will get her education completely from us.”

In 1969 a blow for male equality was struck when a man was taken on the staff. “This happened because the need was shown,” explained Olga. “If you only deal with young women you are only dealing with 50 percent of the problem. Young men need to be educated and are equally as important, not only in education but also in family planning.

“Last year, we got about 80 referrals of both sexes. That is about average. The highest has been about 100 in one year. We deal with teenage pregnancy, sexuality and other problems, working closely with the clinic and Social Services departments. We are kept pretty busy.”

The age group that Y.H.E.D. deals with is 13 to 20-year-olds although there is the occasional 12-year-old who needs help. Now relieved of young Laurence by his grandfather, Olga relaxes at her home in Khyber Pass, Warwick and sighs: “It is like most jobs. It has its peaks – its hills and valleys. At times it gets extremely frustrating. Not necessarily because of the client, but because of the lack of an appropriate facility and whatever is necessary to make life better for that person.”

Although she has been away from work for three months the phone has not exactly been muted. There have been calls from colleagues for advice. But she was obviously happy to be kept up to date.

Asked if any one case sticks out in her mind, she immediately cites the case of a girl who went to the department pregnant and now 13 years later, her child is being given similar help. “She has simply followed her mother,” said Olga.

Societal problems, she feels, have not been minimized. “Sometimes we end up blaming the victim instead of seeking long term remedies.”

The job would be 9 to 5 if it was not for the continual lectures, she has to give to P.T.A.’s youth groups and other local organizations. But she does not complain. “Community education is extremely important. We try at least once a year to have a television programme. Last year we did one for fathering and we are in the process of planning others.”

Her department also runs a haven women over 16 who need a temporary home. The haven, based in Pembroke, is in its fourth year and can accommodate seven women and five babies. Battered women were being helped until the Physical Abuse Centre started up recently.

Olga is a woman who genuinely enjoys her work. “Like every other mother the anxiety level rises when you are about to go off to work,” she said. “But I have a need to work, not just financially, but because of the challenge. It is not routine, and I get a great deal of personal satisfaction.

“The people I work with have a commitment to what the agency stands for. I am happy to carry on in this job indefinitely. It is a very important part of me. This is not a praise of me, but I have seen other programmes start after Y.H.E.D. which have disintegrated for whatever reason. We have been able to continue and give an important service to the island.

“We started small and have mushroomed. We deal with extremely sensitive areas. The need for confidentiality is important because of the smallness of the island. Also, professional ethics come into play. We need to gain the confidence and trust of people and deal with them on a long term basis.”

When Olga started college, she majored in nursing and had a secretarial background, but the latter she felt would be boring. “There is nothing much you can do with a psychology degree, so I got into welfare work and got hooked,” she said. “That was it. Then there was the challenge of coming to Bermuda.”

One of her favourite hobbies is travelling which she is able to combine with work. “I also enjoy cooking and entertaining,” she said. “At the moment things are pretty well full with my three children.”

The third, she quickly points out is husband Alex, boss of Scott Crafts and a staunch Progressive Labour Party supporter. The couple met when the Y.H.E.D. office opened up in the same building as Scott Crafts.

“He was working next door,” said Olga. “I met him four months after coming here. We did not marry until four years later. Alex is a very cautious person!”

Mrs Scott says her 39-year-old husband is an extremely busy man. “He is meticulous in terms of what he does. It has to be of the highest standard. He is very disciplined and has to do things just right.”

Is she the same? “Not as much. He is a very thinking person and being married to him makes me thing.” Politics takes up a lot of her husband’s time, but Olga does not share that interest so avidly. “I try to keep an awareness,” she said. “I think that is very important. But in terms of personal involvement, I am not involved.”

Alex says of his wife: “When she praises me, she is being diplomatic. When I say it about her it is true. She is very good at her job. I have been fortunate to know her before the project got off the ground.”

“I have watched her, with able assistance – she would be the first to say she didn’t do it alone – put together a very fine community service.”

Olga, he says, plays an important part in “one of those behind the scenes organizations.” He added: “One of the more notable things not widely known is that the Y.H.E.D. programmes have gained international recognition.

Mrs Scott, who by this time this profile appears will have been back to work some weeks, is meanwhile more than happy with her lot. “I originally came here on an experimental programme,” she said. “I am still enjoying living in Bermuda. I am finding that it is a good place in which to bring up children. This is my home. That’s it!”