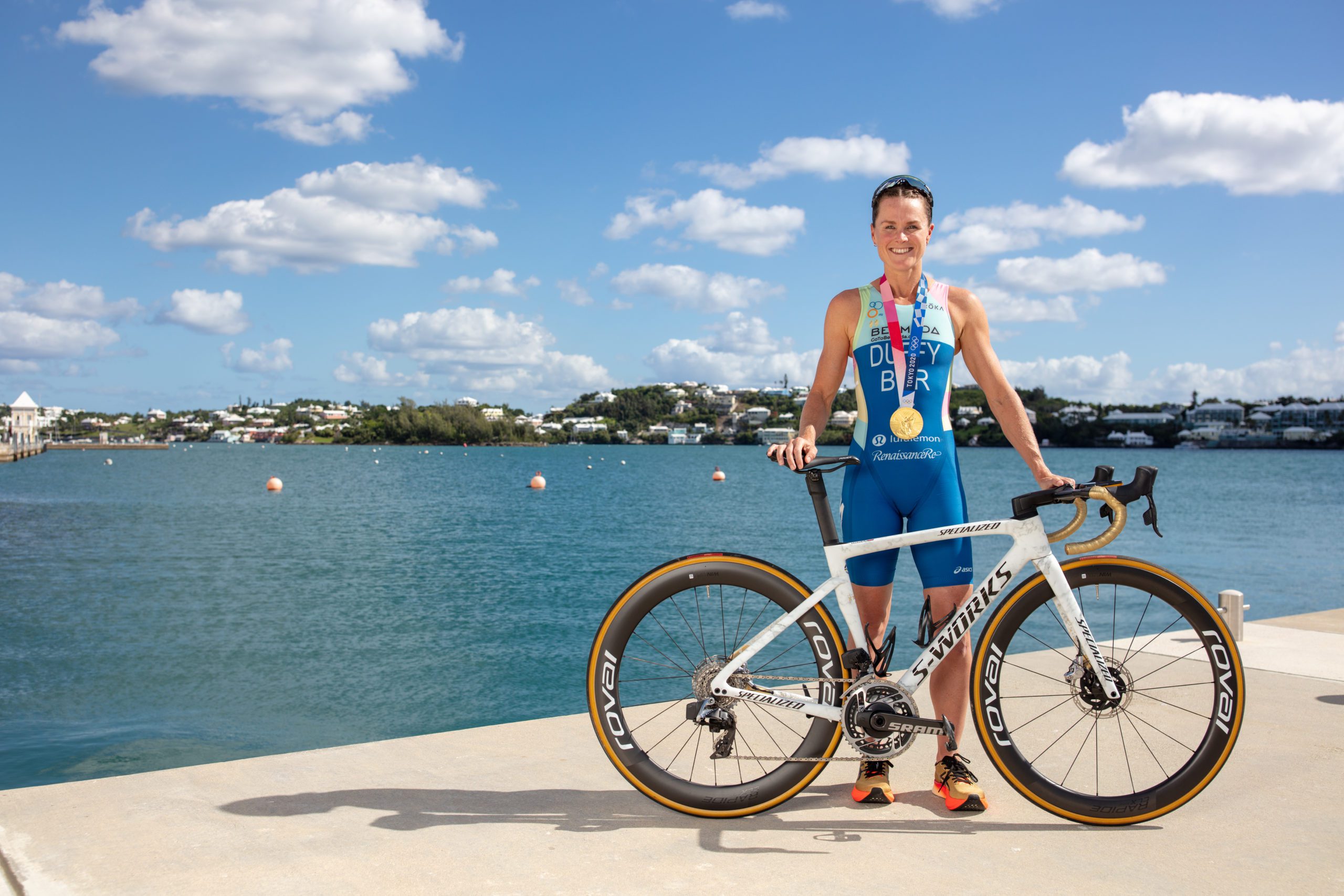 Flora Duffy isn’t normal. On the one hand, you might think that’s stating the obvious. On the other, the precise details of her abnormality have almost certainly been lost amid the Olympic brouhaha. We need a refresher, some of us. Some historical context.

The Duffian hegemony in the world of triathlon began in the off-road discipline of triathlon called cross triathlon—X-tri if you’re cool. The discipline swaps pavement for dirt. The cycling leg is done in the mountains over 30 km of grueling inclines and precipitous drops. At the transition, they drop their bikes and head right back into the thick of the woods to run 11 km of mountain trails. The theme for almost every race is mud. Mud in your eyes, mud in your mouth, mud in your unmentionables. This is fun for them. And it is where Flora Duffy’s reign began.

Her conquest was swift. It started with a bronze in 2013 in the world’s top series for cross triathlon, the XTERRA World Championships. After that she won five straight, with a gap in 2018 due to injury. She was a powerhouse. But that was in the mountains. The larger triathlon world was safe from her as long as she was up there. But like Brennus and his rampaging Gauls descending on the gates of Rome, when Flora came down from the hills there was little anyone could do. That time came in 2016, when Flora was 28.

Over the course of the International Triathlon Union season that year, she took the podium in seven out of ten races on the way to her first ITU World Championship title and put the cherry on top a month later by winning the ITU Grand Final in September. Far away from her perfidious reign, the mountain folk grew hopeful. “Is the bad lady gone?” they whispered. “Can someone else win now?” Nobody answered. They didn’t need to because Flora returned to the mountains immediately following her ITU triumph and once again claimed her title as XTERRA World Champion. Twenty-eight days later she rubber-stamped her title as Ruler of Mountains and Crusher of Dreams by winning the ITU Cross Triathlon World Championships.

It took her nine weeks. Nine weeks for Flora to claim three world titles. Nobody had ever dominated the sport like she did in 2016. And nobody has since. That kind of dominance has become her trademark. She’s the only one to ever post the fastest time in the swim, bike and run in a single race. She holds records in two different distances for the biggest wins ever recorded in WTS history. She doesn’t just win triathlons. She crushes.

So to my original point: Flora Duffy isn’t normal. She hasn’t been for quite some time now. It’s a new reality for her. One she’s finding tough to square with Flora Duffy the Bermudian, the Flora we grew up with. She’s taken our adoration in stride, of course, but you get the feeling she expected us to be a little more chill about it.

It’s an odd situation. We’ve known her name for the better part of 20 years. Flora was a year above me at Warwick Academy. You were in the year above her, or maybe two below, or maybe you went to Port Royal together. We’re not quite sure what she did to get on our radar. Some say it was the Front Street Mile. I personally think it goes back to her stint alongside Gavin Manders as the athletic fulcrum of Patton House and their pernicious rule of Warwick Academy sports days in the latter half of the ’90s.

“Bermuda’s small, right?” Flora offers as an explanation. But she knows exactly why. It’s not one big moment. More the fact a girl started winning every swim meet, road race and triathlon she showed up to. When Flora raced, Flora won. “I guess people took note of that,” she says. “Bermuda’s such a small place, news like that travels fast. I guess because I was winning so much… I dunno… that just kinda got wrapped up in my identity.” It’s the sort of origin story you expect to hear from an Olympic champion. In hindsight her achievements might even seem expected. Who wins a gold medal that wasn’t a prodigy in their sport?

“I would be interested to know if anyone thought back then, truly thought, I could go on to do anything special.”

If anyone knew it back then, they didn’t let on. She wasn’t pressured into anything, but it was there, like the low hum of a UV light overhead. It’s always been there. “I definitely could feel pressure back then,” she says. It was schoolyard pressure. But expectations are part and parcel of being a winner. A great achievement for everyone else soon becomes the winner’s bare minimum. That reality dawned early on Flora.

“If I did, I would get teased,” she says. “Not teased like I would go home and cry, but it was a thing. Because ‘Flora didn’t come second.’”

“It all seems like fun and games now,” she says.

If that was when the pressure started, Flora knows exactly when it ended. It wasn’t once that medal was around her neck. She barely had time to think in the hours and days that followed. She went from one grueling test of endurance to another as the world’s media queued up to speak with her. How many times can a person recount the greatest moment in their life before it begins to lose meaning? If Flora had a moment to think about such a thing, she could tell you. “From the moment I crossed the line to the moment I sat down on the plane, it was unbelievable,” she says. “I had never been so happy to be on a 10-hour flight when no one could talk to me. I put my headphones on, put my seat back, and just slept. It was amazing.”

She’s used that word a million times over the last few months, but she really means it here. She was finally allowed to be normal on that plane back to Colorado. And more normalcy awaited her at home in Boulder. “There’s a lot of really great athletes there, so it’s normal,” she says. By “it” she means herself. And that’s a lie. Flora Duffy isn’t normal. But she is allowed to pretend. And Colorado affords her that luxury. “The thing about Boulder, there’s a load of professional athletes and they are really into just themselves,” she says. They offer her a perfunctory congratulations and dive right into their own, far less impressive, athletic feats. “I think that’s why I like it there. No one is super special.”

That is very much not the case for her other home. Spare a moment for the champ. It’ll be hard sneaking back here without us falling over ourselves to adore her. And as much as all might want the adoration of our countrymen, I know us. I am us. And I know it gets annoying. Case in point, Flora went shopping at Miles the day before our interview. I received two messages relaying this fact from friends genuinely excited to see her. “No way!” Flora says, half laughing to hide her genuine shock. “Were they looking at what I was buying?”

She’s a pretty big deal now, I tell her.  But she gets it. She knows she isn’t normal. Our behaviour isn’t entirely unexpected. “It’s really special to see everyone’s reaction, and I guess how much it’s meant to everybody. And maybe that’s why, because so many people knew who I was as a schoolgirl. The girl in Bermuda doing all the local races who went on to win Olympic gold.”

Come time to knock off, she’s still Flora, plain Flora, in one sock or two. She’s the same girl I knew in the class above me at Warwick, the one who kicked our butts in the Front Street Mile long before anyone thought. She’s Flora your friend, your cousin, and your hero. She’s Flora some 63,000 ways.

But Flora Duffy will never be normal. Not here. The athletes of Boulder, CO, will be the only ones playing it cool from here on out. They can pretend Flora Duffy isn’t special all they want. She’ll need them to. Because Flora Duffy is Bermudian. And so are we.

Ask anyone and they’ll tell you.