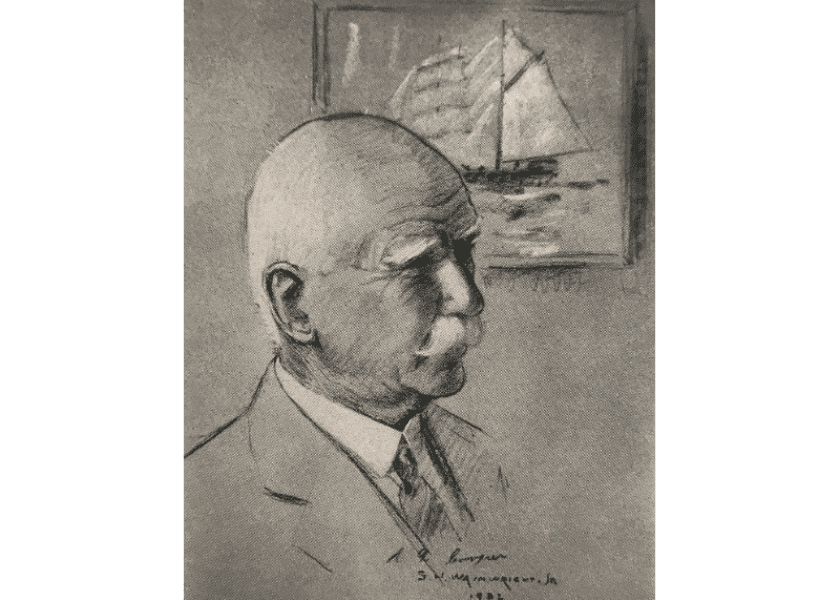 This article has been taken from our archives. It originally appeared in the February 1933 issue of The Bermudian.

Until perhaps fifty years ago, Bermuda was a community of seafaring people.

There was not an old family here whose ancestors were not sailors and, naturally enough, most of their traditions centre around ships and the sea. But the days when our cedar vessels were known in every port from the Slave Coast to Labrador are over; and there is only one man alive who was actually in command of a Bermudian square-rigger. He is Captain Elliot Lincoln Butterfield Cooper, usually referred to by his friends as Cap’n Dixie. He made his last voyage forty years ago while still in his early thirties, but with twenty years’ sea service behind him, for he began as a thirteen-year-old apprentice.

In actual time, two-thirds of his life has been spent ashore; he worked longer at the post from which he has just retired—as Sergeant-at-Arms of the House of Assembly—than ever he put in at sea. But what does that mean to a man who in his youth has been a sailor, a sea-captain. The years filled with memories of storms and foreign ports are the ones that matter to Cap’n Dixie, for his blue eyes sparkle and the idiom comes easily to his tongue as he spins yarns of the ships he sailed in, or of an adventurous voyage.

Captain Cooper was born in 1861. When he was eleven years old he had his first experience of life aboard a sailing vessel. His father, Phares was first mate of the Anne Seymour, and doubtless to give his young son an early start in the career that in those days was automatically mapped out for a majority of Bermudian youths, he took him on a voyage to New York. It is, by the way, the only one he has ever made as a passenger. His sole recollection of the entire trip indicates the sort of thing that lures boys away from school.

A couple of days out of Bermuda, the lookout sighted what appeared to be a whale splashing about on the surface. The sea was calm and the breeze light, so the captain altered his course and stood toward it. On closer investigation, it proved to be a ship, bottom up, rising and falling in the trough of the sea, glistening in the afternoon sunshine.

The captain, a resourceful man and ever ready to turn an honest penny for his owners, ordered the boats lowered and all hands were set to work stripping the copper sheathing from the derelict’s bottom. Astride her keel sat the eleven-year-old surpercargo: Master Cooper! He was not there purely for his own enjoyment, either; his father had given him a box in which to collect the myriad copper nails with which the sheet metal was fastened.

A few months after this incident, Captain Cooper’s father was washed overboard from the Anne Seymour during a gale. Two years later, quite undaunted, the son shipped as an apprentice aboard the Bermuda-built brigantine Excelsior. Aboard this vessel he got his first lesson in the tricky art of handling a windjammer. The work was hard, but he was fairly determined that some day he would become a skipper, therefore he must follow the usual routine and work his way up from ordinary seaman to able seaman; then, if he could master navigation, he might hope to become a mate and eventually a captain. Looking ahead at one of the barriers, which divided the fo’csle from the quarterdeck, he saw that navigation, which in those days depended largely up on the involved calculations of dead reckoning, would require more arithmetic that he could muster. School was a very dull substitute for the adventurous in the Excelsior, but thoughts of himself as a future captain were uppermost, and after a couple of years he signed off and settled down ashore to learn as quickly as possible the requisite amount of the multiplication table.

His mother, Eudocia Hinson was then living in the vicinity of Shelly Bay. There was a shipyard nearby, and on his way to and from school, Cap’n Dixie lingered to watch the shipwrights at work on a beautifully designed schooner to be named Racer. Of course was on hand for the launching, and a few months later, when he was through with school forever and looking for a ship, he joined her as a seaman. She was very fast, but too small for the trade, so her owner sold her to the government of British Guiana as a revenue cutter.

Cap’n Dixie’s next ship was a barque that had been trading between here and New York for nearly thirty years, the famous Eliza Barss. To be signed on her articles, in the local estimation stamped a young man as a full-fledged sailor. The Eliza Barss was the cattle ship that freighted down the meat supply for the two regiments and the detachment of artillery that in those days formed the regular garrison in Bermuda. All of this meat was, of necessity, shipped on the hood, and most of the steers were Texas longhorns that had scarcely seen a man until they were herded into the railway cars consigned to Jersey City stockyards. Such untamed cargo provided plenty of excitement in the loading and unloading; and even at sea the crew of the Barss was sometimes called upon to mix bullfighting with their other duties. Captain Cooper carries a scar as a momento of one incident in this stage of his career, when he was gored by a loose bull that he had gone down in the hold to recapture.

The Eliza Barss was a shallow draught vessel, broad beamed and very fast off the wind. Leaving New York one Thursday afternoon, she found herself in company with a schooner-rigged steamer Canima, which was then operating as a passenger ship on the New York-Bermuda route. The wind was dead fair for Bermuda, and Captain Henry Hollis who was in command of the Barss crowded on sail and left Sandy Hook with the Camina ploughing in his wake. From Captain Hollis, with an expert eye on his top hamper to make sure that every stitch of canvas was drawing to the utmost, down to Elliot Cooper, youngest seaman on board, everyone prayed fervently for the favourable breeze to last. It did, and at 2 a.m. on Monday morning, three and a half days out from New York, the Barss was lying off St. David’s Head waiting for daylight and a pilot. The Camina, despite her prestige as a passenger ship and her pretensions as the forerunner of a New Age, did not appear on the horizon until three or four hours later, to the chagrin of her skipper and the supreme satisfaction of Captain Hollis and his crew.

Ordinary-seaman Cooper of the Eliza Barss now had a chance to take a step in promotion, and ship as able-seaman aboard the Maggie, a two-masted schooner that had no particular run, but took onions to Boston, fetched lumber from Florida and made occasional excursions to Prince Edward Island and the West Indies. She also had a tremendous capacity for getting into trouble. On a voyage to Prince Edward Island, shortly after Cap’n Dixie joined her, she drove ashore in a blinding snowstorm. When the weather cleared twelve hours later the look-out saw, not fifty feet away, the outline of a huge red barn. A man could not have jumped from her deck to the snow-covered farmyard, and yet she was only slightly damaged when a tug pulled her off at the next high tide.

Among other things, the Maggie, seventy-nine feet over-all, had a mainmast of a hundred and ten feet, which distinguished her, relatively, as one of the most heavily sparred vessels afloat, and a dangerous one in a heavy sea.

Once while approaching Bermuda in moderately stormy weather, her fore-stay carried away. The heavy masts began to creak ominously, and Cap’n Dixie and another seaman went aloft to rig a new stay. But the tiny vessel was pitching badly in the off-shore swell, and before anything could be done to prevent it, both masts snapped, hurled the two men in the crosstrees onto the deck below, and went crashing and bumping over the side. Cap’n Dixie had his foot badly smashed, but otherwise, strangely enough, no one was injured. The Maggie and all on board her were in grave danger for, dismasted, she was drifting at the mercy of the wind out into a stormy ocean.

All haste was made to get her under jury rig. Luckily she was carrying a deck load of lumber, which helped in the construction of two stumpy masts. In the meanwhile she had drifted a hundred and twenty miles off her course, and with awnings and tarpaulins cut into rude sails she began the slow, wearisome trip that a week later brought her back to Bermuda.

Several other minor events enlivened Cap’n Dixie’s career aboard the Maggie but for him, the really crucial one was his promotion to mate.

And after a year or more in this capacity, he attained his boyhood ambition, by returning to the Eliza Barss as Captain. But the Barss was getting old; steamers had robbed her of the cattle trade, and now she was starting with her new skipper on a wandering quest for cargoes.

She cleared from St. George’s for the last time in the summer of 1889, laden with sugar, and bound to Queenstown for orders. Thence she went to Cardiff to load coal for Bermuda. But she had been strained on the voyage over, and was leaking badly; some repairs had been made, but the crew noised it abroad that their ship was unseaworthy and that they would refuse to sail in her. On the night before she was scheduled to sail, Captain Cooper heard that the insurance surveyors would be around the next morning to condemn his ship and prevent her from going to sea.

He determined that if the Eliza Barss was to be condemned, the sentence would be passed in Bermuda and not in England; and toward that end he made a few hurried arrangements. At 2 a.m. he roused out his disgruntled crew and ordered them to let go the shore lines. A tug took him through the locks and down the river, and when morning broke he was clear of the land. Thirty-seven days later he arrived in Grassy Bay, having pumped her every foot of the way, with his cargo of coal glistening through the open seams. This last home run killed the Eliza Barss and she was breached on one of the islands in the Great Sound.

Bermuda’s sailing-ship days were practically over anyway, and after a couple more voyages in command of the schooner Pitt, Captain Cooper retired from the sea for good and all.

Only once was he seriously tempted to return. The British brigantine Jeanette had arrived here with government stores; her mate was taken ill and put ashore, and the agents got in touch with Captain Cooper and pressed him to accept the job. He agreed, and arranged to call at the agent’s office to sign the articles. On his way there, he stopped to look at the Jeanette lying alongside what is now the Transportation Wharf. She was a fine looking vessel of about eight hundred tons, but as he stood there, something—perhaps his sailor’s instinct—warned him not to sail in her. He told the agents that he had changed his mind; they pleaded, but to no purpose. Eventually the vessel sailed without a mate, bound to British Honduras. Cap’n Dixie’s instinct was correct—she never reached there and was never heard from.