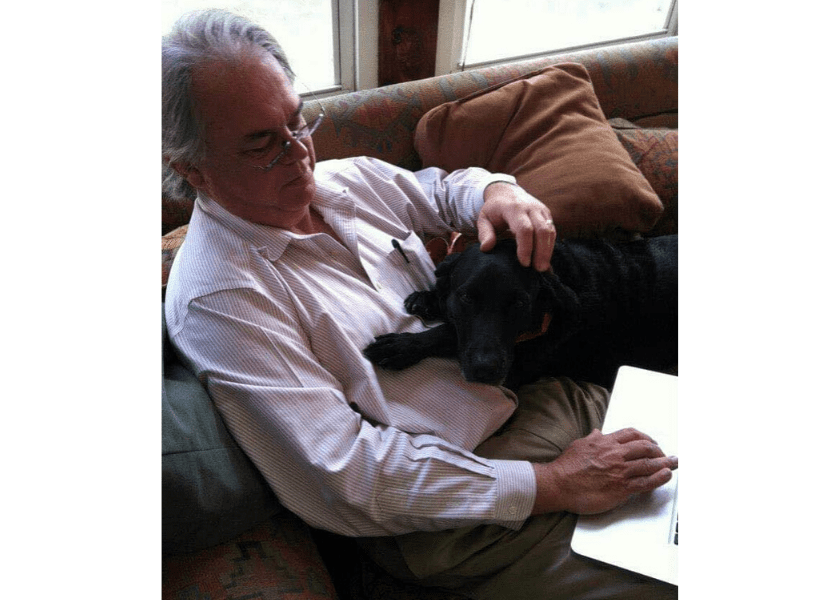 Checking In With Mayor Charles Gosling

The Bermudian checks in with Mayor of Hamilton, Charles Gosling from his home in Harrington Sound, to see how he is handling the work-life balance in the face of a global pandemic.

BM: How has your sanity fared thus far as we near the end of week two of shelter-in-place?
CG: Cathy [his wife] and I flew back from the UK on the 13th of March several days before Government’s self imposed isolation was instituted. I showed up for a couple of poorly timed meetings on the following Monday with the plans of sheltering in place for the rest of the week. Well, I was told in no uncertain terms to stay home and shelter for the next two weeks. There was a week after when, “damned if I was going out into the disease ridden world in my pure body” and then came the lockdown. The first three weeks were great, going for walks along the trail, social distancing ourselves, driving by supermarts with their long lines tut-tutting to ourselves in our self-pleased manner, social distancing ourselves. It was amazing how many people, even back then, who would want to shake hands. Prior to all of this I have been making the move towards retirement from Gosling’s rather tentatively, so this has actually been a great exercise. And I’ve been able to occupy myself through the whole day!

BM: Has the job of Mayor changed now that you’re working from home?
CG: I have deliberately stepped back and let the Executive, managers and staff do their jobs and I have been very impressed by their grabbing the challenge, working from home in many instances, others continuing to keep the city clean. Obviously today is not what any of us predicted (except of course for the Enquirer and Trump) and we are pulling back, reducing our expenditures, as we know our revenue streams will similarly be challenged. Making the decision has to be based on (as out City Secretary says) “measure twice and cut once”.

Zoom has been a great savior in terms of televised meetings. They are not easy on the chairman as the participant faces can be on a couple of screens, but it gives me the pleasure of putting on a tie to show no damned virus will disrupt my municipal meeting standards, luckily my slippers are off camera! Essential work continues to be done and while treading water is necessary, so is showing everyone that you have it in you to set off to the next mark & beyond.

BM: How have you been keeping yourself busy during our collective quarantine? Will you have to find more to do in the coming weeks to pass the time?
CG: In 2006 Gosling’s celebrated its 200th anniversary. Earlier that year I had discovered a treasure trove of old documents, bills of lading, letters, journals, wills, court affidavits and such all dealing with the bankruptcy of the UK partnership which started in 1810 and went on for another 20 years before being resolved. I went twice to the National Archives in Kew to go through documents, in 2006 and, having found more, 2018. I have well over 21 hundred pages photographed and  am, rather than doing a bit here, or a bit there, am able to devote multiple hours a day transcribing.

The handwriting can be a challenge. It can be frustrating being in full flow and then coming to a key word which is indecipherable. Too many of the letters are interchangeable. We know the old way of doing s’s as f’s, well the real f’s, p’s, t’s, j’s, s’s r’s and capital H’s can be pretty close as well. Not to mention the m’s, n’s, w’s and capital H’s again. That plus Random capitalization of Words. Still I have a great dictionary site with scrabble function so I can look up words beginning (or ending) with …. and Google itself. To come across a name; person, boat, partnership, location or wine- type in and bang, you’ve struck gold (albeit guess work)!

I now know there are at least 2 international companies we have been in business with off and on over that 200 year time span (It was 4 in 2006). These are Hennessy & Martell Cognacs. This has led me to a letter in the Hennessy Archive from a Francis Gostling ordering placing a second order from the company in 1768. Gostling and Gosling was interchangeable back then, as seen in William Gosling’s will of 1808, and a Francis Gosling of that time was in a partnership with the Godding’s, brewers in Fulham, from which comes Sarah, William’s wife. William, himself, can be traced back to 1778, in partnership with a Paul. I am now getting a clearer picture of the setting up of a partnership in Bermuda in 1806, the challenge of Bufineff where letters may take 4 weeks or more to be delivered (Though I could, if pushed, identify with that).  I now have over 200 pages of transcribed material.

BM: As a man with a strong affinity for nature, have you and Cathy found yourselves enjoying it more in your solitude? Are the orchids brighter?
CG: The orchids are well and the lawn is getting hand weeded. I help Cathy daily filming her and the latest dog going around (through is more accurate) an agility course. She does extremely well and I am very proud of her determination and success. I have germinated some corn we have had in the fridge since year dot and have 40 plus plants on their way. We have been so lucky with the weather, Bermuda again is looking postcard picture perfect and yet part of me wishes I was somewhere else- or at least able to have had that choice. Gross ingratitude at its finest.

BM: What’s been on the menu in the Gosling household?
CG: Made some fish cakes the other day. Too much potato, again, but that means Cathy can have one and say that she enjoys it. I have also dabbled with the odd (truly odd) curry. My mother was a British war bride, so she brought with her some inspiring recipes which would make Rudyard Kipling native in comparison. Still everyone I cook it for enjoys it or blindly lie through their teeth (nice mix of metaphors- sort of what the curry is like). Apart from that it has been much of the old same- reassuring in its familiarity.

BM: What’s been on the “radio”?
CG: NPR, I am getting tired of either hearing music I grew up to and enjoyed for forty years, wondering what is next that is as good and discovering tripe. You never want to grow up to be your parents, but some of these musicians have the talent of me in the shower. A one hit wonder (which translates to, “I wonder when he will hit that note?”). I love NPR cause it is almost always new, alert & alive telling me stuff I don’t know and stuff I thought I would never like to know. Wait, Wait on Saturday lunch time being the climax to the week.

BM: How have you been keeping in touch with family and friends?
CG: Cocktails works for me. My sister lives in Southwest London on her own and my Daughter, Sarah in the North along with boyfriend Svet, in Islington. FaceTime, What’sApp all those programs are godsends. We even use them to reach out locally to my son, Ambrose & wife Katie and other friends. The challenge actually is to disconnect. I am old enough to tell myself what an effort it has been to get in contact (like the old days of person to person through an operator, or waiting til after 6:00 pm for the cheaper rate), and yet not savvy enough to figure it out that it is finger clicking easy. Lucky us, they say.

BM: How has the house’s stock of liquor fared? Are you indulging a bit more with so much time on your hands?
CG: I was planning on 14 days for the wines! Luckily I always overstock though by the beginning of May we may be diving (that’s how I drink) into the really good stuff. I am fortunate to have devoted much of my time at Gosling’s marketing the spirit side of our portfolio, so I do have a nice selection of various spirits at hand. Some are my “Michael Caine selections”- too expensive to drink, too much of the family to sell. They at least are safe.

BM: Do you have any tips to make the most out of this situation that you’d like to share?
CG: I wrote on Facebook recently about the 4 pandemics Bermuda suffered back in the mid 1800’s. One of these cost the island 7% of its population, about 4,200 in today’s numbers. They had no idea what was causing this, can you imagine the angst people were living through back then? Today we know what our virus pandemic is, what it looks like, various tools by which we can minimize, if not stop it in its tracks. Social distancing is one, hygiene is another, staying the flip home is a third. It ain’t rocket science, it’s called public participation.