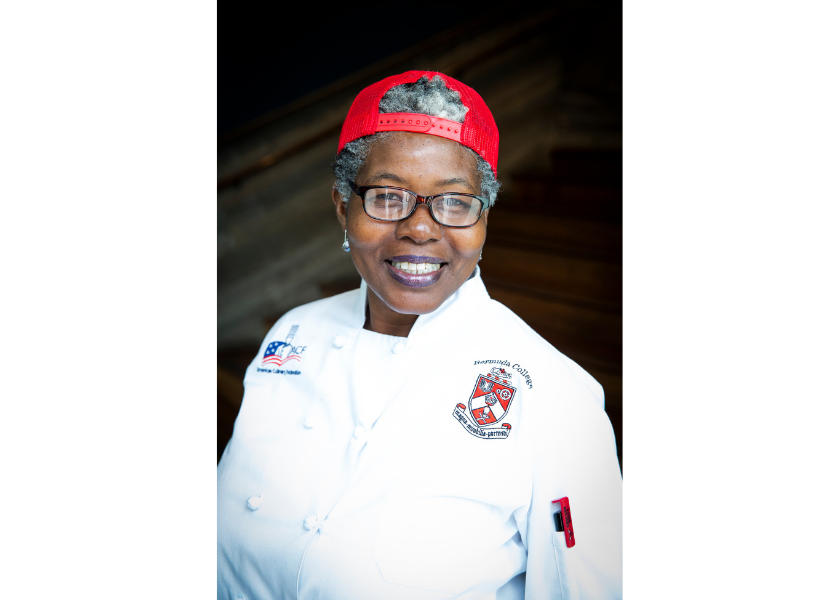 Amid a kitchen bustling with cameras and anxious onlookers, three top culinary students from Bermuda College competed for a chance to work at celebrity chef Marcus Samuelsson’s restaurant this April. Host of the event, Samuelsson paced the room inspecting the dishes with silence. As time waned on the final challenge, last year’s winner of the competition, Anthony Sousa, called out the time-checks as the chefs raced to have their plates prepared in time. “Three minutes!” “Two minutes!” “One minute!” “Hands up!”

Breathing collective sighs of relief, the three chefs—Renee Daniels, Tremayne Bailey and Tamiyah Durrant—could do nothing more. The winner was to be decided by a panel of five judges—Marcus Samuelsson, Hamilton Princess GM Tim Morrison, Chef de Cuisine at Marcus’ Danai Hongwashkul, Bermuda College culinary instructor Shawn Ming,  and last year’s winner, Anthony Sousa—who rated the chefs on their professionalism, organisational skills in the kitchen, and the taste and innovativeness of their dishes… crucial components of a successful professional chef, especially one who will soon be working at a restaurant like Marcus’.

The competition involved three rounds: Canapés, Chef’s Choice and Mystery Box, wherein the chefs were presented with a box of unknown ingredients and given 30 minutes to create a delicious dish. The first round featured Beef Stuffed Arancini, Chickpea Coconut Stew and Beef Taco Nachos, with Daniels’s Arancini winning the public vote.

The second round saw the judges presented with three delicious dishes from the chefs, representing some of their favourite foods: Coconut Curry Shrimp, Leek Mushroom Pasta and Tuscan Shrimp Pasta with White Sauce.

In the final round, a Mystery Box presented to each chef included apple sauce, cheddar cheese Pringles, green grapes and a chicken breast.

In the end, Daniels was the obvious choice. At 50 years old she had been made redundant by the Royal Gazette, where she worked in the accounts department. Undeterred, she decided to pursue her dream instead of finding another desk job.

“I decided, ok, I don’t want to go back in an office, I want to follow my first love of cooking,” she said. “So that’s when I enrolled in the culinary programme at Bermuda College.”

It was a rapid rise for Daniels whose cooking skills were perhaps only overshadowed by her bubbling and affectionate personality. Besides winning over the hearts of all the judges, her dishes were bar none. “I got kinda thrown for a loop on it [the Mystery Box round] when I saw Pringles. I thought ‘Oh my god what am I going to do with this.’ Only thing I could think of was to turn it into a flour and try to bread it up and fry it,” she said.
“The highlight of my plate…Marcus liked the grapes and the applesauce puree I made. He enjoyed that. And he enjoyed the root vegetable. They didn’t believe that I’d be able to pull it off, but I showed them that I could!

“You know I am looking forward to getting started over at Marcus’, but I’ve already had two other offers!

Asked if she’s a name we need to look out for: “Of course!” she said. “One of these days you’re going to see me in my food truck.”

Marcus Samuelsson said: “I am thrilled to have been able to take part in the second annual Chefs Competition at Bermuda College. The students here have great potential and I was so impressed with the dishes they presented. Renee really made her mark on us and demonstrated her creativity and showed that she can remain cool under pressure. It takes a lot of courage to put yourself out there in a competition like this and I’m confident that all three of the contestants have great careers ahead of them.”

Teneika Eve, senior culinary lecturer at Bermuda College and co-host of the event, said: “We’re so excited to have created this tradition with Hamilton Princess & Beach Club, which is one of the biggest employers of our students after they graduate. This competition is a fun way for our students to get a taste of what it’s like working under tough conditions and great preparation for working in a professional kitchen, like that of Marcus’.”