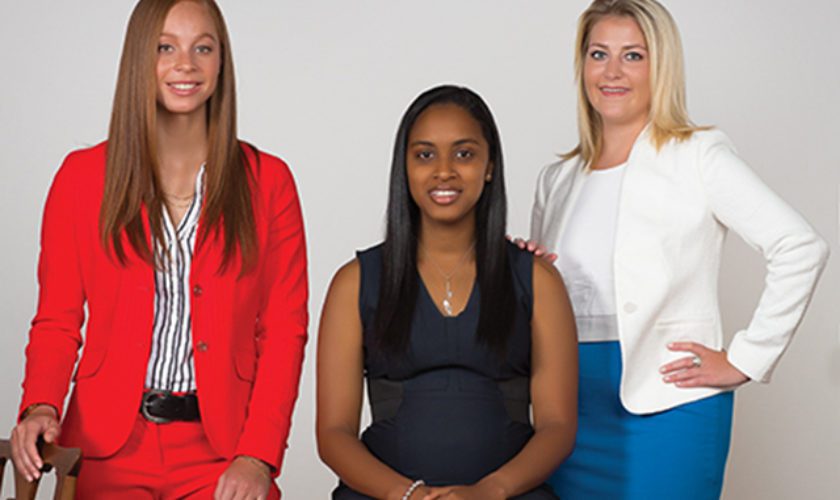 “As a young person, I think the most exciting part of my career is the exposure that I’m afforded, even at a junior level,” says 24-year-old Dominique Richardson of her position as an underwriting graduate trainee at Chubb Bermuda. “Having the opportunity to meet with CFOs and risk managers of billion dollar companies and learning about new and developing products is an invaluable experience.” Having gotten her start as an ACE Select (now called Chubb Select) intern during her junior year of university, Richardson originally rotated through all three of the company’s underwriting departments to get a broad range of experience, and loves that her job is consistently challenging. “I find that I am always pressed with a new task or challenge that allows me to grow as an up and coming underwriter.”

Richardson praises her mother as being her biggest source of inspiration, and is equally grateful to her coworkers at Chubb. “The entire Chubb team continues to play a key role in my career development, and provides the necessary resources for growth, continuous improvement and opportunities,” she states, elaborating that having an experienced mentor at the company helped her adapt to a world that is constantly evolving in terms of new products and business trends. With a short-term goal of obtaining her Chartered Property Casualty Underwriter (CPCU) designation, her long-term ambition is notably altruistic. “I want to be recognised as someone who is seen as an inspiration and positive role model to others.”

At 28 years old, Deloitte audit manager Natasha Osborne loves the fact that her accounting designation affords her the ability to take her career in different directions. “Being in auditing, you get to see many different parts of a company, as well as different companies themselves,” she reveals. “I’ve been exposed to hedge funds and SEC insurance/reinsurance companies, as well as the firms that do everything in between.” Originally an intern, Osborne joined Deloitte full time as an audit associate upon graduation from university, and has blossomed at the firm ever since. As someone who got her foot in the door early, she advises those starting in the field of auditing not to underestimate their worth. “People often think that when you start, you’re at the bottom so you’re least important, but I always tell our associates that they aren’t the bottom; they’re the solid foundation of our team, and everything they do ultimately enables someone above them to do something else.”

Thanking her family, school teachers and mentors for helping her get where she is today, Osborne explains that her biggest ambition isn’t necessarily to secure a certain position at her firm, but simply to inspire and motivate people throughout the course of whichever path she chooses. “If somewhere in the future, someone is answering questions for the Rising Stars feature and they feel that I have been an inspiration to their career, or that they want to follow a similar path to mine, then I will have been a success.”

“The size of the reinsurance market on the island allows for the opportunity to cultivate relationships with clients, brokers and industry peers that you will be engaging with for the next 10 or even 20 years,” says 25-year-old Chelsea Mayeaux, expressing what she loves the most about her chosen career.

An assistant underwriter at XL Catlin (US Property Treaty), Mayeaux became interested in reinsurance whilst doing her international baccalaureate at Bermuda High School, and accepted an internship in the company’s catastrophe modelling department shortly thereafter. Upon graduating from university, she was offered a full-time position as a catastrophe modeling analyst.

“The reinsurance market is continually evolving as risks become more complex and, as a result, you have to be adaptable,” she states. “No two days are the same, which makes for both a challenging and rewarding career.”

Mayeaux is grateful to have had an extensive support system while in pursuit of her career, and thanks her parents in particular. “Owning their own business, they instilled in me the importance of hard work from an early age and taught me to give it my all no matter how menial the task,” she says, adding that her colleagues have had an equally positive influence on her professional development. On what she finds to be the most exciting aspect of her career, she cites the global scale of XL Catlin’s client base.

“Recently, I was afforded the opportunity to work in our London office, which allowed me to tap into a market that I previously only had limited exposure to,” she explains. “The experience was valuable in countless ways, with the ability to work at Lloyd’s being a key career highlight for me to date.”