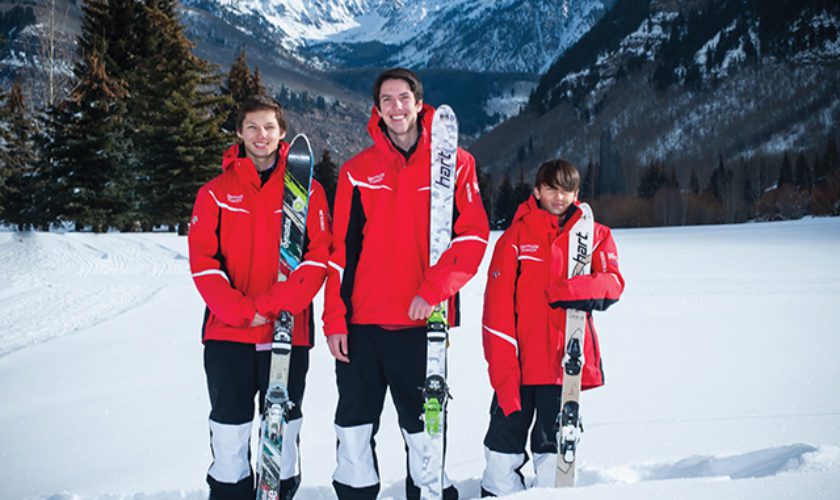 From Rocky Shores to Rocky Mountains

In case you didn’t know, Bermuda has a freestyle mogul skiing team. But this isn’t a “Cool Runnings” scenario—far from it. The Leseur brothers are rapidly becoming a force to be reckoned with.

Seventeen-year-old Matt Leseur is the second-highest ranked foreign mogul skier in the US and is ranked 25th overall. His 14-year old brother, John, ranks 52nd among juniors in the US.

Such is the novelty of having two high-level skiers from Bermuda, the song “Kokomo” by the Beach Boys was played as Matt carried the Bermudian flag for the opening ceremonies of the Junior World Freestyle Championships in Åre, Sweden, this April. He would finish 19th out of 40 athletes from around the world in moguls, and 20th in duel moguls, where skiers go head-to-head instead of on their own. Not bad for anyone’s international debut, let alone an islander.

That very weekend, John was competing in a regional competition in Copper Mountain, where he finished 13th in moguls and 7th place in dual moguls on his 14th birthday.

The boys are competing regionally in Colorado and in national events in Utah, Idaho and Vermont. Matt competes at the continental level in the North American Cup (NorAm’s) which includes high-level competitions in both the US and Canada, and has just recently received a quota to enter the Federation Internacional du Ski (FIS), allowing him to compete in World Cup events, the qualifying platform for the 2018 Olympics in Pyeongchang. John, meanwhile, has qualified for the US Regional Nationals in both the moguls and the dual mogul events.

14-year-old John Leseur at a regional competition in Vail, Colorado.

Mogul skiing is said to produce the best “all-mountain” skiers. The courses ranging in length from 200m–270m with a pitch up to 32 degrees are heavily moguled with two aerial jumps. Athletes are judged by a panel of either five or seven judges (depending on the level of competition) who rate an athletes’ turns and airs, while points are awarded for turns, airs and speed.

It’s an odd sport for two islanders to get into, and they’re certainly turning some heads.

“Our jackets bear the name of Bermuda and have the Bermuda flag on the front. It definitely gets you recognised by people who are Bermudian or have visited the island,” said Matt. “I have had some funny looks but mostly support.”

“Some people joke and ask what mountains we ski on in Bermuda,” said John, “But I tell them we train in Vail.”

Specifically, they train at the Vail Ski and Snowboard Academy, where they hone their skills six days a week. Rigorous morning training is followed by academics in the afternoon, and land training—trampoline sessions, weight lifting and conditioning—later in the evening.

In the winter months, between October and April, the boys work through a variety of programmes to progress their turns, airs and speed for competition. But there is no time for rest once the snow melts. They practise their aerial maneuvers on ramps in Steamboat Springs, Colorado, where they launch themselves in full regalia, twisting and turning and flipping, before landing in water.

The brothers are already hard at work developing new “aerial packages” for the next season.

“Getting into the Vail Ski & Snowboard Academy was huge for both John and me because it allowed us to train six days a week while still pursuing an education,” said Matt. “The amount of travel we do during the ski season would have been impossible at any other school.”

Along with their regular summer season training programmes, Matt and John have been invited to Whistler in British Colombia, Canada, for a two week advanced training camp hosted by ID One skis which will feature several of the very top US Ski Team and Olympic athletes as guest coaches.

Despite the non-stop training, it’s their mother, Judi, who perhaps has the hardest job of all in this family affair. Whether it’s organising uniforms, equipment outfitting, or registering for events and making sure the family dogs have overnight accommodation, it’s Judi who runs the show. Airline tickets, hotel rooms, meals and even extra hand-warmers are all in her care. “The bags come home on Sunday night, the laundry gets done and folded back into the bags which leave again on Thursdays and sometimes as early as Tuesday for long-distance competitions,” she said.

The brothers’ love-affair with skiing started when their oldest brother, Christopher, 20, first strapped on a pair of skis at just three years old. While Chris gave up competitive skiing to pursue college, John and Matt have dived head-first into the sport, with their eyes set on one day competing in the Winter Olympics.

Both John and Matt first started competing at around eight years old in “Vail Cups,” a programme offered to young athletes to introduce them to competition.

“The first competition that really stands out in my mind was not a Vail Cup but a regional event where I placed 4th,” said Matt. “It was the highest I had ever placed among some pretty tough competitors and I received a 4th place ribbon not just a participation ribbon.”

Today, Matt is aiming to solidify his international rankings and participate in his first World Cup event in Deer Valley, Colorado, in 2017. John, who has just earned his licence from the International Ski Federation (the world’s highest governing body for international winter sports), is preparing to make the step up to compete regional competitions like his brother.

“Anything is possible,” said Matt. “If I do well in these events I would love to make it to the 2018 Olympics.”

“Looking ahead for me I need to ski the regional events and have some success and then move on to the NorAm level. The 2018 Olympics is probably not in my future because of my age, but I haven’t ruled out a chance at maybe the 2022 Olympics!”