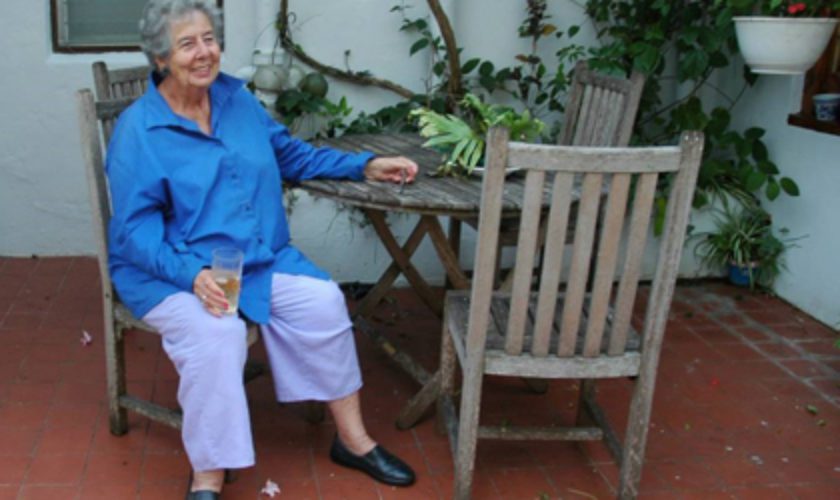 I remember exactly when I first met Hazel Lowe. It was in 1973 when she and her husband, Bobby, and newly married Mike and I were all invited by a mutual friend to eat in the recently opened Newport Room.  She was dark haired, dark eyed, vivacious and utterly charming. I was suspicious. Could anyone really be that nice? Well, yes, she could. She was for the whole 42 years I knew her. I soon realised her total engagement with life came from both her deep love for her family and for her guest house which until the last years of her life she ran with unfailing enjoyment and energy.

Guests would return to Salt Kettle House year after year, not just for its superb location with views of both Hamilton Harbour and Salt Kettle Inlet, but for Hazel herself, for the laughter and lightheartedness that permeated the house. The kitchen, Tuscany yellow, had a magnetic force drawing everybody into its family atmosphere—photos of children, grandchildren and friends everywhere, plants, fluffy ginger cat relaxed in a woven basket and at one point Sam, an extremely affectionate rangy terrier. It was here Hazel would guide her guests, sit them down at her kitchen table, proffer drinks  and advise them—no, instruct them on the best places to visit and dine at reasonable prices. Immediately they would be pulled in by the spell of her Mary Poppins personality. Hazel reveled in the diversity of her guests and diverse they certainly were, in profession as well as nationality. There were, for example, teachers, lawyers, air stewards; there were also, as she told me, hookers. “Not what you’re thinking,” Hazel says laughing. “They were all women from Canada and they were rug hookers!”

Year after year they would come, sometimes to reunite with fellow guests, sometimes for New Year parties that Hazel would hold in her guest lounge. Then there were spontaneous gatherings, such as the one she would hold in her kitchen on the day of the British Grand National. Guests, family, friends would listen to the radio commentary, jumping up and down with excitement. Hazel always picked a horse with a vulgar name and was ecstatic when one year Blowing Wind did her proud.
Without fail, two other resident guests arrived promptly at four every afternoon in search of their tea, then returning at six for cocktails. Lulu, Hazel said, was friendly but Queenie was aristocratic, if not downright arrogant. She would peck on the door if it wasn’t open. But it didn’t matter—Muscovy ducks, they were part of the family.

That was the secret of Hazel’s charm: she would gather everyone into the warmth of her hospitality. Not just her own family and friends, not just her guests, but people she met in shops, in restaurants, in church—even people who happened to walk past Salt Kettle Guest House whom she would greet as long-lost friends before they would become part of her coterie.
She was an icon. And now that she has gone, memories of Hazel and her guesthouse will become an integral part of Salt Kettle’s history.