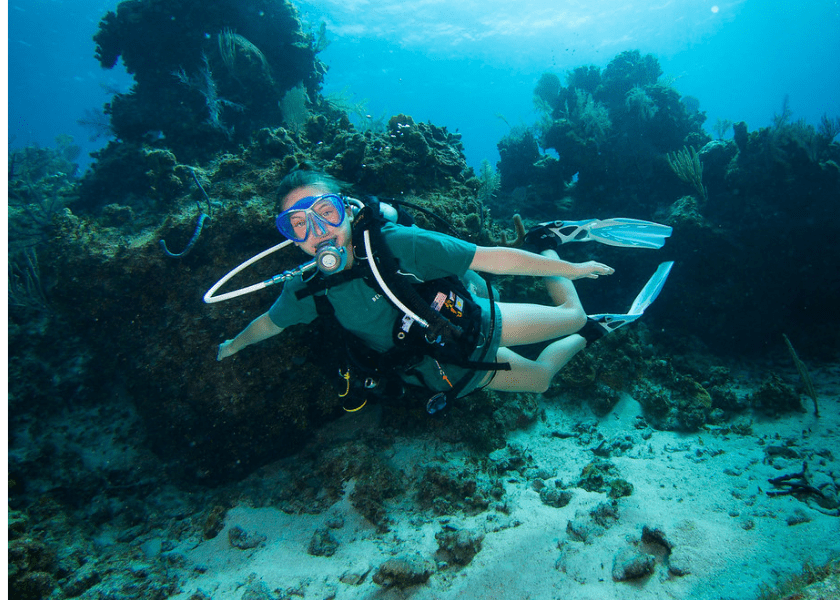 Holly Wakely: Master of the Dive

Tell us how you got started in diving? How old were you?
I’ve been in SCUBA gear since the age of four, starting with PADI’s SASY programme, which is essentially snorkeling in confined water with a baby tank; this got me used to breathing through a regulator. At age eight, I participated in the PADI SEAL team, which teaches kids how to use full SCUBA equipment in confined water to a maximum depth of four metres (12 feet). I was certified to dive at the age of 10!

And since then, how many dives have you completed?
I have over 540 logged dives, that’s over two cumulative weeks spent underwater!

How did you go from diving recreationally to becoming the world’s FIRST junior dive master?
I was certified as a Master SCUBA Diver at the age of 12—which included completing PADI’s Rescue Diver Course, along with five specialty courses. At that point, I felt that until I turned 18 and became eligible for the Dive Master certification, there was little I could do to further my SCUBA diving. At 15, I traveled to Saint Lucia to assist on a Dive Master course with Kids Sea Camp, a fantastic company owned by Margo Peyton. It was then, with Margo’s influence and expertise that we realised it’s possible for people under the age of 18 to complete the Dive Master course; it had just never been an option due to the risk of liability. A year later, talk of the Junior Dive Master programme started, and this summer I flew to Saint Lucia to complete it with Margo as my instructor. It’s important to note that the programme is not yet available as a regular course; I was part of the pilot course, which involved testing it out and determining the positive and any negative aspects of it.

And what does it feel like to be the world’s first?
Being a first in the world is something I still can’t quite wrap my head around! I feel that I am even more an advocate for the ocean now and this is the best time for me to make a difference!

Most don’t know that women are still the minority in diving—in fact, just 40 percent of certified divers are female. What is it like being so accomplished in a male-dominated sport?
It wasn’t until I was about 12 that I recognised that in most locations I had been diving, the majority of the instructors were male. I always looked up to Margo Peyton for advocating for both children and female divers. I love that now I am able to be a role model for younger females in diving and I hope that soon the sport will not be seen as male-dominated but rather a sport in which males and females are equally represented.

We know you just graduated from Warwick Academy—what are your plans for the coming years?
I’m taking a gap year to focus on furthering my SCUBA education before attending Bond University in Australia in September of 2021. I’ll begin training as a PADI instructor in January and I don’t plan on stopping there. Ultimately, I would love to become a PADI course director, though that’s far in the future and I have a lot more training ahead of me!

Last question, Holly: What’s your favourite local dive site?
Though I love all of the dive sites here, my all-time favorite is Southwest Breaker. It’s a shallow site with the perfect mix of sand and reef, along with an epic swim-through. It’s the first place I ever remember diving in Bermuda with my dad when I was 10. There’s a bunch of pudding wife wrasses that live around the sand holes there that love to come and play with divers. It’s super shallow, with a maximum depth of just 12 metres (40 feet) making it picturesque with all the natural light.