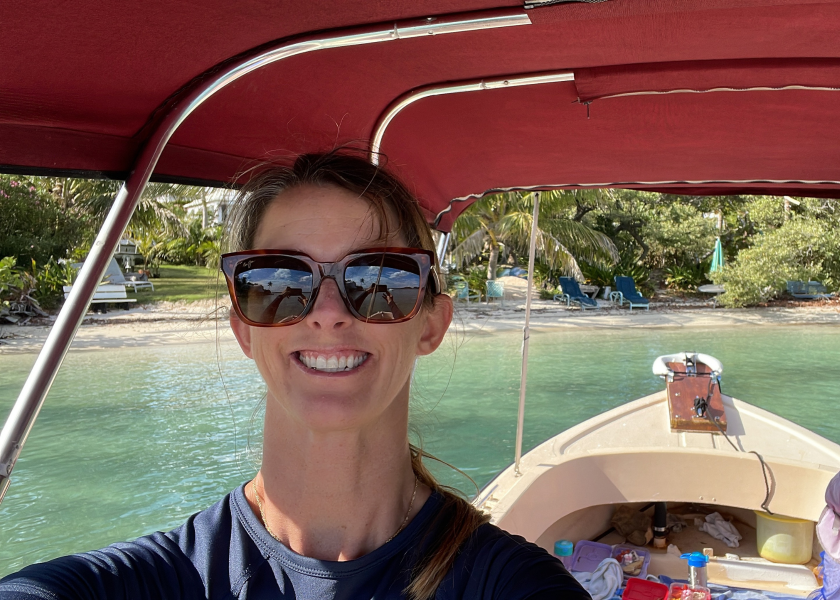 How Karen Plianthos is Leading the Fight Against Ocean Pollution

More than 2,000 pounds of marine debris was removed from Bermuda’s waters this summer by ocean activist Karen Plianthos, as part of her annual ‘Cash Bash Trash’ cleanup campaign. The initiative, which was started by Plianthos seven years ago has removed a whopping total of 12,600 pounds of trash from our local marine environment since its inception. And, her efforts have garnered significant philanthropic support through a GoFundMe page, where donations raised from each cleanup benefit local and overseas charities.

Karen Plianthos spoke to The Bermudian Magazine about her unwavering passion to protect our oceans and the success of the fifth wave of Cash Trash Bash.

BM: In 2018, you won a Best of Bermuda award in the category of “Community Activist” – what inspired you to start participating in environmental activism and ultimately launch this ocean cleanup campaign?

KP: Since a very young age, my mother Louise Jones would have us go after school to my aunt and uncle’s home and clean up the little beach and cove there in Spanish Point. I think that it has always just been a part of my life and I wanted to instill that same feeling of desire in my own daughters to help our oceans. Cash Trash Bash came about in 2015 when I wished to cover the costs for a dear friend’s bachelorette party, but didn’t have the funds to do so. I thought, as a child when we wanted to go on trips we would do charitable actions to raise funds – car washes, trash pick ups etc., thus as an adult why could I not do the same? I challenged friends, family, contacts, people in the street even to donate $1 for every pound of trash that we pulled out of the ocean. The initiative was so successful that the leftover funds after paying for the party we donated to KBB. The following year, we didn’t have the party to pay for, but charities are always in need for funding and we thought why not divide the funds between a local and international charity that is either environmental or ocean conservation focused. Thus began Cash Trash Bash.

BM: Hauling over 2,000 pounds of marine trash from Bermuda’s waters is a huge undertaking and an incredible accomplishment – did you have any help from other volunteers?

KP: First and foremost, I could not do this undertaking without help from my mother Louise Jones. She has and will be the absolute rock in this endeavor, whether it is skippering Seaweed, sorting the trash to take it to the dump, or feeding my daughters while I am diving up the trash, I would not be able to accomplish this without her help. This year there is great list of volunteers who came out with us to assist – my husband, Nicolas, my mother in law visiting from South Africa Margie Plianthos, Jessie Masters, Simieon & Mark Outerbridge, Jo Spittle and her friend Mary who was visiting from the US, Nadine, Philippe, Fynn and Colin Hendriks-Picalek family visitng from Switzerland, my brother Wayne Jones and his daughter Brianna. Also special mention of Emma Farge who encouraged me to inform the media of this initiative. Of course the financial encouragement from all of those that donated to keep us inspired to go out again and again is also equally important to recognize.

BM: During your dives, did you observe areas that were more concentrated with marine debris than others? If so, where?

KP: Yes. The south side of Port’s Island right by the docking space there was by far the greatest concentration of trash that we saw this year.

Map showing the concentration of trash collected throughout Karen’s 30 days of dives.

BM: What was the most prevalent type of trash that you found?

KP: Beer bottles hands down. My mother and I estimate that if you had to break it down glass would be 85% of the weight, metals 10% and plastics 5%. Of the glass it would be 90% beer bottles. It’s sad to think that in other countries such as Canada one can receive money for returning beer bottles and thus they are not considered trash, but here we have no such program in place. I understand the infrastructure is different here and Anne Hyde from KBB has discussed with me the fact that in order to ship these bottles back to the manufacturer you are looking at the fuel costs to move them there along with everything else that makes up the carbon footprint. Ultimately we as a society need to be better about putting our debris in the proper location where it belongs and not in the ocean.

BM: What was the most unusual type of trash that you found?

KP: This year I would say it’s a toss up between one of those all in one snorkel masks, a mask that actually had the owner’s name attached to it with a tag whom I’m hopeful to locate and return their mask to, or an octopus trap that is from the shores of West Africa.

BM: In your eyes, after witnessing firsthand the current state of Bermuda’s marine environment over the years, do you believe enough is being done within our local community to extract ocean pollution?

KP: No. I wish that there was more of a focus in our community, schools, churches, places of work for all of us to spend some time in, on and around our oceans cleaning up. But it’s not just the clean up, it’s the change of the mental state of this island. In 2017 the international charity that I selected was Clean Bhutan and we met Nedup Tshering. His motto was ABC – Advocating Behavioural Change. This is what is most important. If we are not teaching everyone the importance and the vital role that the ocean plays in our survival on this planet, then we will be perpetually cleaning up trash. It’s sad but true. We must change how we view the ocean, it’s not a place to just toss a bottle into for a “crab home”.

BM: The Cash Trash Bash campaign raises funds for the charities, Waterstart and Wildlife Friendly Otley. Why did you select these two specifically?

KP: Each year I try to find new charities and shine a light on what they are doing for our planet. It is important to me that we not think solely of ourselves here in Bermuda but the world at large and that we can impact those around the world with our actions. JP Skinner embodies the essence of Cash Trash Bash in creating ocean stewards in educating our young people about this most precious resource surrounding us. In addition they provide bursaries for those in need to accomplish this and it was sincerely heartwarming to speak to a parent of a child who had received this and how far it pushed their child into their love of the ocean spending a year at school at sea. I am hopeful that the funds raised for Waterstart will give more children this opportunity. Wildlife Friendly Otley may seem like a very strange choice, but it ties back to my friend Michelle Howard whom the bachelorette was for. She is now living in Otley where we had our summer holiday and it was really beautiful to see how they are promoting environmental diversity in their town in England. The understanding that wildflowers are crucial to the declining bee population and taking back areas that would otherwise be just grass covered. They are making small changes that will impact greatly their environment and educating the youth in this as well. Both of these charities speak to what I believe in.

BM: Apart from preserving the health of Bermuda’s waters, what do you hope this campaign will accomplish?

KP: Education, whether it be on the state of our oceans or what you as an individual can do to help. Ultimately I hope that I can inspire others to do something that is going to pivot shift us towards a better environmental future for our children. My niece Brianna exposed me to the idea that although I may not be able to change the world, I can change my world and in doing so create a ripple effect for others to see and do the same.

BM: What is one message you wish to share with our readers about their role in protecting our local marine environment?

KP: If we do nothing to protect our local marine environment, then it will not be there for us in the future. We as Bermudians rely upon the ocean for so much in our lives – whether it be tourism, fishing, enjoyment for our holidays, the list goes on, thus if it means so much to us then we must demonstrate this level of importance in action to protect it.

BM: Lastly, will there be other ocean cleanup campaigns in the future and how can we get involved?

KP: My intention is every summer for the months of June, July, and August to spend 30 days diving up trash and perhaps for 2023 to make it so that 3 volunteers could join us on each dive, thereby 90 new Cash Trash Bashers. But you don’t need Cash Trash Bash to get you to help our oceans – take a bag to the beach and collect trash when you go, pack a mask and some gloves when you go boating and spend 30 minutes of your time on the water collecting trash. Leave it better than you found it and we will all benefit from it in the long run.