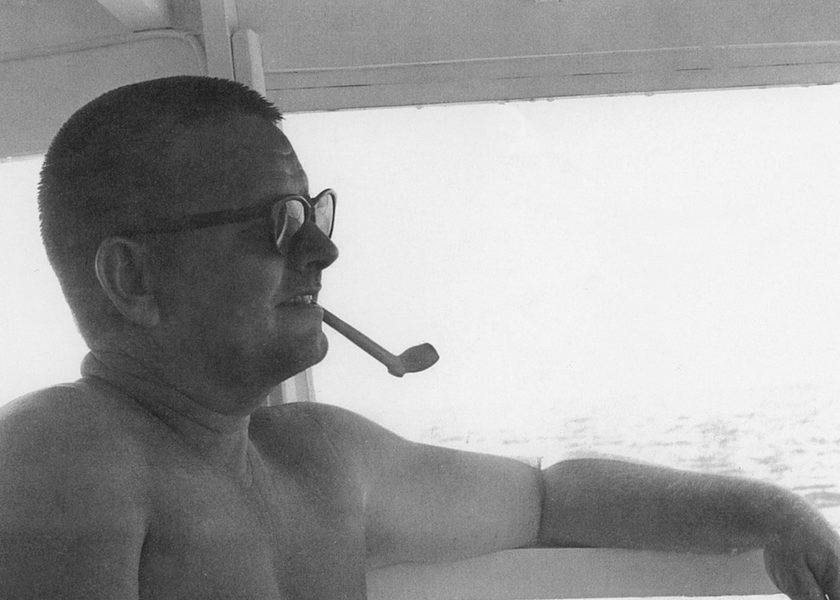 Legacy of a Legendary Explorer

When Teddy Tucker passed away in 2014 at the age of 89, he left behind an unparalleled collection of shipwreck records, ocean discoveries and fascinating stories including over 4,000 photographs. His daughter, Wendy, has launched a website to preserve this legacy and provide a valuable research source for anyone sharing her father’s passion.

“He virtually knows the ocean and everything about it better than any man I have ever seen,” said the late Peter Benchley, author of Jaws and The Deep, and a close personal friend of Tucker’s.

After her father died, Wendy Tucker began going through his papers and slides and determined that so many years of work needed to be shared, not lost:

“I doubt if Bermuda shipwrecks will be recorded like this ever again,” she says. “The wrecks will deteriorate over time. There’s no better way than a website. Anyone who wants to look at it can.” Ben Watson from LookBermuda, a friend who also went diving with Tucker, helped her put it all together.

Wendy is sometimes contacted by a person who has found a shipwreck and now, she says, she can send them a link to compare the artifacts or what the hole looks like. “It was a huge amount of work and time. Everybody thinks about the exciting, glorified side of it, but it was far from that at times.”

What has emerged is not just an ode to Tucker’s extraordinary life through photographs and written memories, but also a record of those who worked with him: “Many interesting people over the years came to Bermuda and went out with us—film stars, astronauts, Russian scientists. We knew the first astronauts because a lot of training was done in the water.”

Wendy wanted to include the parts of her father’s life that people didn’t always know about, including his artistic side: “He was a multi-faceted person. He would paint in the wintertime,” she says.

There is a photograph of him painting the San Pedro, home of the famous Tucker Cross, for her with paint recovered from the wreck. There are also photographs of Wendy wearing the cross, which was later stolen: “I thought it was pretty but I didn’t really understand the significance of it and my parents never emphasised the treasure so when he found something, to me it was just another day.”

Growing up, Wendy remembers her father’s ocean research as being very much a family affair. She is an only child and she and her mother, Edna, went diving at a time when it wasn’t common for women to be included in such ventures: “First of all it was awkward, but my father made it very clear that we were part of the package and we were totally accepted. When we got the helium balloon to look for shipwrecks, my mother was the test pilot. She was so light they struggled to get her back down!”

Sending someone up, attached to a helium balloon, which was tethered to the boat was an original idea of Tucker’s. “We used the sea plane at first, but you had to go fairly fast,” explains Wendy. “With the balloon you could go the speed of the boat. On the bottom of the balloon was a rope with a plank of wood, like a bosun’s chair. It had to have been a couple of hundred feet above the boat.”

Tucker was also the first to devise the grid system for recording shipwrecks. In addition to documenting all the shipwrecks he found, another resource on the website is the vast Artillery Encyclopedia. Wendy worked on this with Belgian marine archaeologist Robert Stenuit using information gathered by the late Mendel Peterson, former curator at the Smithsonian, as well as their own research. “It starts from the inception of the cannon to the First World War—it’s all the different marks of each country, crests, everything,” she explains. “The cannons have a life of their own. Some were traded and very valuable. When they had wars, they would always try and get the cannon.”

Of all the things Wendy witnessed coming up from the ocean her two most treasured mementoes are a large coffee cup, which Tucker found on a British navy ship wrecked off Dockyard, that she uses and a small Styrofoam cup that went down to the Titanic. “We did a lot of work with National Geographic,” she explains. “There was a group going out to the Titanic and they had Japanese cameras, American lights, Canadian technology and were using a Russian ship.” After consulting Tucker, who asked if all this international machinery was going to be able to “talk to each other,” they decided to bring it to Bermuda for testing first.

When the team eventually went down to the Titanic, they took a 12-ounce Styrofoam cup, which because of the pressure, shrunk to the size of a shot glass. The three-man team wrote their names on it, the depth and “for Wendy.”

Tucker “was always game for anything” and used to say: “if you don’t have fun, it’s your own fault.” Wendy hopes this website will provide similar inspiration.

The website www.teddytucker.com will launch on September 15, 2019, and will be added to over time as Wendy continues working on her father’s records and research.