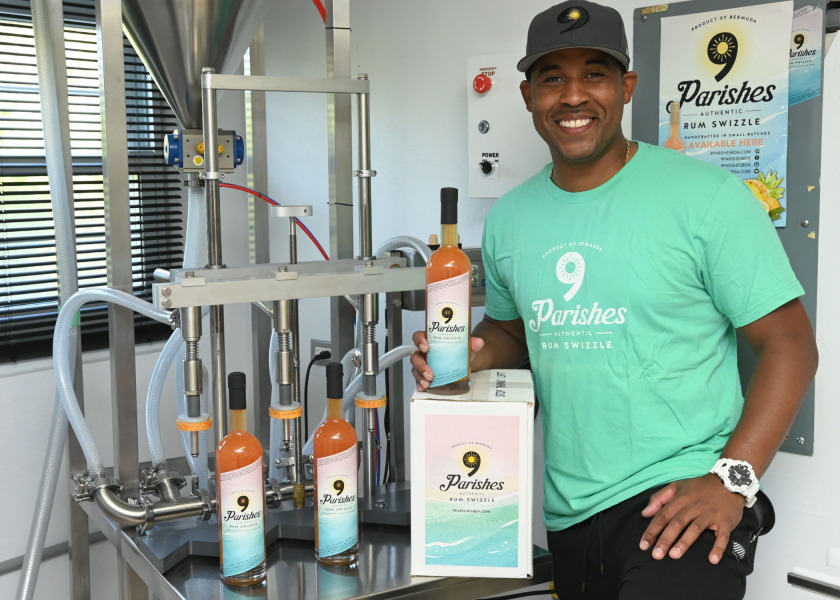 Made by Bermudians: Chris Furbert

Before he was able to successfully launch his line of rum swizzle, Chris Furbert was living out of his garage. Yet after a decade in the making, his 9 Parishes Rum Swizzle made with 13 ingredients and a fair amount of alcohol has emerged as an authentically Bermudian homemade swizzle.

The 9 Parishes story begins in 2007 when Furbert realised there was nowhere in Bermuda to get a store-bought homemade rum swizzle. “Often when tourists came to Bermuda they would ask where they could get homemade rum swizzle, but there really wasn’t a market for it at all,” explains Furbert. However, he was forced to put his project on hold since he was unable to get a liquor licence. “Some years later there was a new judge in charge of the liquor licence panel, so I had some meetings with him. I needed to do a number of different things but in November 2017 we were first able to sell 9 Parishes.”

During the interim years, before 9 Parishes was launched, Furbert worked as a hotel bellman and bartender and even for a period lived out of his own garage in order to save money. But during that time he still kept focus on eventually creating his own rum swizzle. “I was a bar tender and made it [rum swizzle] behind the bar for a few parties, but I was interested in having my own recipe.

“A lot of people make good swizzle in Bermuda, there was just nothing on the market and people are so secretive about how they make it and that’s fine. I just thought what’s the point in making something that tastes so good and not sharing it with anyone.

“I wasted a lot of money trying to get it right, but I knew when my mom, who’s a Christian lady, tried it one day and really liked it, and I know how much alcohol is in there, I knew it must be good.”

Currently, the focus is on further building his brand and getting the swizzle into even more stores. With nearly five years on the market, Furbert has seen sales of swizzle grow even during the pandemic which he believes to be the result of focusing on locals just as much as tourists. He expects that, as tourism begins to recover, 9 Parishes can only continue to grow.