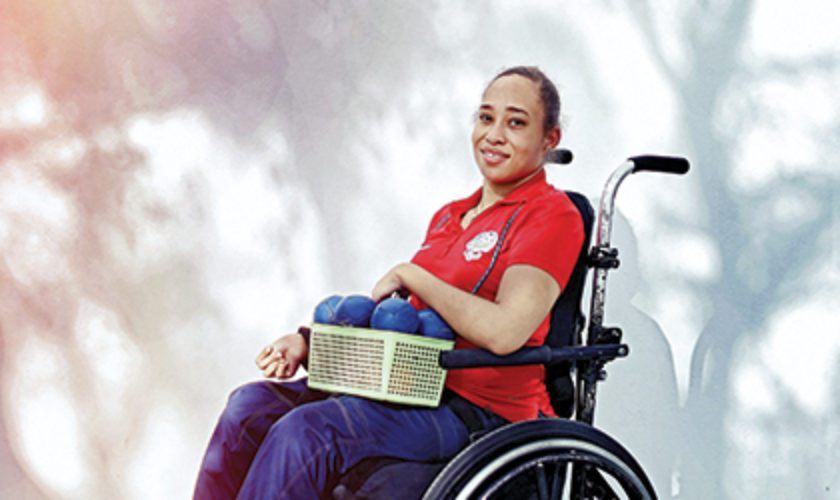 For the differently abled, qualifying for the quadrennial Summer Paralympic Games represents the pinnacle of sporting achievement, and helps prove that those with physical disadvantages are exceedingly capable of incredible athletic feats that can land them front and centre on the world stage. With the 15th such Games to be held this September in Rio de Janeiro, competitors from around the world will congregate in Brazil to compete in one of 23 sports ranging from archery and athletics (track & field) to boccia and wheelchair rugby. Making this high-profile event all the more exciting is the fact that for these upcoming 2016 Games, we will likely have not one, but two Bermudians representing our island in two different sports. Yushae Desilva-Andrade and Jessica Lewis, who respectively compete in boccia and wheelchair track, have worked tirelessly to qualify for the games, with Lewis already having done so and Desilva-Andrade awaiting official word as of this writing. As they are high-achieving daughters of Bermuda’s soil, we thought we’d interview them for thoughts on their goals, achievements and their lives as differently abled athletes.

Highly skilled in the precision ball sport of boccia, Yushae Desilva-Andrade has had quite the eventful past few years, having competed at China’s World Championships in 2014, Toronto’s Parapan Am games in 2015, and again in China in March 2016 as a final Paralympic Games qualifier. Born with cerebral palsy, she has been differently abled for her whole life, and even had to undergo scoliosis-related spinal fusion surgery at age 14. This, however, proved to be the catalyst that inspired her to take up sports: when her doctor insisted that she stay active during her recovery period, she attended the Windreach Adaptive Sports Expo, and while there, picked up her first boccia ball.

“I got inspired to play boccia after a man named Josh Vander Vies came to Bermuda to show us how to play. It blew me away that he could play boccia because he has no arms or legs,” says Yushae, adding that following this, she was so committed that it took only several months for her skill level to dramatically increase. Now at a point where she trains three hours a day, five or six days a week, her rapid rise in the world of boccia has been due exclusively to discipline and hard work. She also credits Jessica Lewis, the other subject of this article and one of her best friends, for helping her decide to take up competitive sport. “She inspires me by showing me that anything is possible even if you’re disabled.”

Yushae’s ultimate sporting goal is to keep climbing the world rankings and eventually become number one in her division. To upkeep this ambition, she follows a careful regimen of diet and exercise that respects her condition. “My diet can vary depending on whether I have an appetite. When I do, I try to eat a good bit of what my body needs because I can only handle two meals and one or two snacks a day,” she says, elaborating that her training schedule takes her all around the island from BHS and Windreach to Sandys Middle School gym, and even to her own house.

To other differently abled individuals considering taking up a competitive sport, Yushae offers sound and inspirational advice. “Don’t let anyone or anything stop you from giving it a shot. Even if it’s a sport you’re not perfect at, I can tell you from experience that you will get better with time. So reach for the sky because you can do it.”

Perhaps Bermuda’s most well-known differently abled athlete, wheelchair track competitor Jessica Lewis has proudly represented Bermuda in several overseas championships, and boasts a high international profile for her commitment to the sport. Winner of a gold medal in the 2015 Toronto Parapan Am games, she currently holds the record for their T53 100m event, and even collected a bronze medal in the Doha 2015 IPC Athletics World Championships. Having competed in the 2012 London Paralympics and already qualified for the upcoming 2016 Games in Rio, her ultimate goal is lofty, but simple: “To get on the podium at a Paralympic Games.”

Taking inspiration from her coach Ken Thom and his son Curtis (who is also a wheelchair track athlete), Jessica, like Yushae, has roots at Windreach, and began competing internationally in 2010. “I remember the first time I got in the chair and I just found it to be so much fun, and enjoyed the speed of the sport,” she explains, adding that she gained further motivation from getting to spectate at the 2008 Beijing Paralympic Games. With an intense regimen that involves alternating between the gym and the wheelchair, she focuses on building strength, power, fast twitch muscles, speed and endurance, concentrating more heavily on chair training the closer she gets to a competition date. “Usually as the competitions begin, we will increase our protein intake and will also increase our carbohydrate intake to help give us more energy going into the races.”

During her free time, Jessica studies therapeutic recreation at Brock University, and has one year left in her degree programme. “I am taking a light course-load to balance school and training, so will do my degree over six years instead of four.” She also enjoys writing blog posts about her experiences as an athlete, hoping to inspire pride and serve as an advocate for other differently abled individuals. She admits that her condition can come with some difficulties, particularly in the way certain people perceive her. “I have had a lot of experiences where people won’t talk to me, and will talk to whoever I am with because they don’t think I am able to speak for myself,” she says, but remains a steadfast and optimistic role model regardless.

Her advice for those in similar circumstances to hers who want to pursue sports is succinct, yet valuable. “Just go for it! Get yourself a good support team. Be aware of the sacrifices that you will need to make. Work hard and put 110 percent into it.”