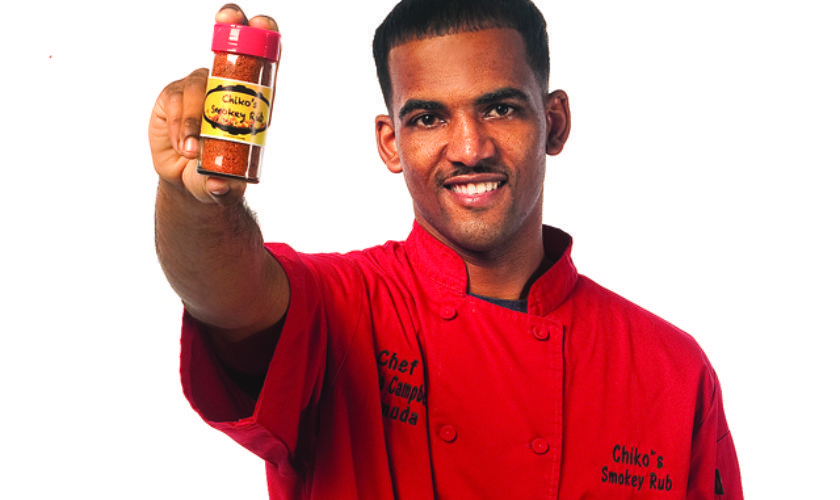 Everyone knows that there’s no shortage of delectable cuisine in Bermuda, but self-made Bermudian chefs who’ve leveraged their own personal “brand” into widespread local and international success are few and far between. Cue Michiko Campbell, sous chef at the Royal Bermuda Yacht Club and creator of Chiko’s Smokey Rubs, a series of spice rubs that have taken Bermuda by storm in just a short time. Going by the nickname “Chef Chiko,” Campbell is arguably the first name since Outerbridge’s to create a successful line of local seasonings that are truly here to stay.

Having recognised his passion for food in his teens, Chef Chiko pursued a diploma in culinary arts at Bermuda College immediately upon graduating from high school, after which he completed a renowned culinary programme at Johnson & Wales University in Rhode Island. Not favouring one particular style of cooking over another, he entered the Bermudian food and restaurant industry ready to experiment, and to this day embraces the unexpected nature of the field. “There’s always something new to learn,” he says of succeeding in the culinary world. “It’s all about having a passion for cooking and a creative mind.”

Chiko’s Smokey Rubs gained widespread recognition on June 4, 2014, when Chef Chiko debuted and sold them to eager customers at Bermuda’s weekly Harbour Nights event. Word of mouth spread fast, and he quickly became a household name locally and abroad. “It’s an all-natural product with 10–15 spices in one bottle, and it really adds a twist to your dish,” he explains of his seasoning blend, noting that the brand is now recognised and enjoyed as far away as the US, UK and Australia. Acknowledging that “tourists are always looking for something ‘Bermudian’ to take home with them,” his popularity with visitors reflects his ambition to be known worldwide as a chef with a positive attitude who makes a difference in the way people create and experience food.

“Anyone who knows me will tell you I have always had a big heart”, says Chef Chiko, elaborating that his other passion is sharing his success by giving back to the community. On Christmas Eve, 2014, he demonstrated this by organising a charity event to feed hot meals to the homeless. Feeding over 450 people and generating $1000 in donations for the Eliza Dolittle Society in the process, the dinner was hugely successful and helped raise his profile not only as a talented chef, but as a philanthropist. “Life is about sharing”, he says, adding that he hopes to be able to make the Christmas Eve meal an annual event.

Chef Chiko’s short-term goals are to expand his business while creating new flavours for his line of spice rubs. “This year, I will be bringing out a spicy version of the ‘original’ Chiko’s Smokey Rub. Also, I will be bringing out an ‘eastern’ seasoning. It will have an Indian and Moroccan influence with a Bermudian twist.” As for the long term, he hopes to build customer loyalty, open a restaurant and eventually sell his products to a large company for wide distribution. “I dream big no matter what,” he adds.

Of Bermuda’s culinary industry in general, Chef Chiko opines that it has experienced improvement in recent years: “Most [local] restaurants are able to provide a variety of cuisines and menu options for people to choose from.” His primary advice for Bermudian chefs looking to break out of their comfort zones is to study cuisine in a university overseas if possible. He also encourages local restaurants to send their chefs abroad to take culinary courses or to shadow international chefs to increase their knowledge and gain new skills. With ambitious role models like Michiko Campbell poised to continue making great strides in our local food culture, the future of Bermudian cuisine is indeed looking up.