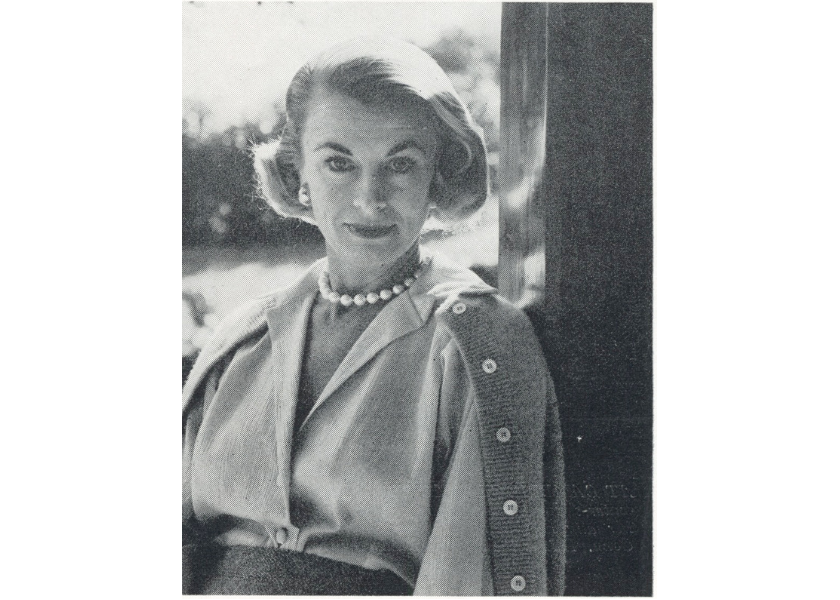 This article is taken from our archives. It first appeared in The Bermudian in January 1957. It is replicated here exactly how it appeared originally.

In the winter of 1950 Polly Hornburg sat in her dining room, wondering a bit perplexedly how best to dispose of the bale of African cotton that surrounded her and reached from floor to ceiling. The svelte former model had little idea that her first creations, done for fun, would become best-sellers overnight, turning her into a fashion name and making Bermuda famous for a new kind of Calypso. Like most home-grown businesses, the now well-established Calypso Shop began as a hobby, a pastime dreamed up by a Bermuda girl who had returned home after roaming far afield.

Daughter of Sir Howard Trott – no mean businessman by Bermudian or any other standards – Mrs. Hornburg was educated in Bermuda and the United States, married a U.S. businessman and found a career for herself modelling high-fashion clothes from New York to California.

Back in Bermuda she found she had a lot of time on her hands, and inspired by her love of clothes, modelling experience and the bright African cotton prints she had seen in a movie travelogue, Polly Hornburg took her first plunge by ordering some of the fabric. It arrived in a bale, thousands and thousands of yards, nearly filling the dining room of the Hornburgs’ home in Paget.

Now, nearly seven years later, the experienced and established designer still laughs when she thinks of her first design.

“It was just incredible – those thousands of yards of fabric – and all the seamstresses in the dining room. We just made everything we could think of, bathing suits, dresses, skirts, blouses and my favourites – tapered slacks.”

“We just worked and worked, sewed and sewed and got the shop open on time. But I didn’t see it; I was sick in bed.”

“We were really experienced – we thought we had enough stock to last for weeks, and sold out the first week.”

The shop was in the quaint, ancient gatehouse at Girvan, the Hornburg home, and the designer remembers “I spent all my time running between the dining room and the gatehouse. My first daughter, Suzannah, was born in California, before we moved to Bermuda, but the second, Lisa, seemed to come with the shop and was almost born between it and the house.”

Nobody remembers why the name Calypso was chosen, but that name, and the idea behind it have proved not only that Polly Hornburg is her father’s daughter, but that she and her husband John are an eminently successful team in their own right.

The demand that cleared their first small shop in its opening week has not decreased, and shows no signs of abating. In 1952, with two successful years of rural operation behind, Calypso moved to town. Big advertisements announced the opening of the first extension – the familiar shop on Front Street under the Longtail Club – and a saucy donkey tethered in front with a gay Calypso cart caused a traffic jam when he insisted on spending the day lying in the street.

This was the first of many moves that have seen Calypso expand in Bermuda, Jamaica and the United States.

Behind the designs all the time, and in the shops, Mrs. Hornburg has kept a watchful eye on the clothes. And after a very successful first year of operation her husband left his position as managing director of Hand-Arnold Ltd., to devote all his time to the business side of the growing concern.

“I never studied designing, you know,” Mrs. Hornburg said, “I went to Briarcliff, where they had a very thorough course in fashion design, but I blithely passed it by to take things like psychology, history and art.”

Before her marriage she did odd bits of modelling at shows in Bermuda and posed for magazine photographers taking pictures in the Colony. But her serious career began when she went to live in the United States, and for several years she modelled in stores in California, Washington and New York. She worked for Clare Potter, where she learned many things, and moved to a new phase of the fashion world when she became a stylist for an advertising agency.

She still designs “by rote,” shunning the drawing board for the fabrics, draping them this way and that until she has the desired effect. “I just pull it around on myself until it looks like something,” she laughs. Ideas she gets “just sitting,” thinking, sometimes for days, until she feels she has just the right inspiration for the beginning of a line.

Once the first two or three pieces are done ideas come quickly, and in less than two months a full line, with 100 to 150 pieces will be ready for showing.

As show time approaches things move even quicker. Polly Hornburg would be the first to tell you that she works fastest, and best, under pressure.

The most enchanting things about Polly Hornburg clothes are the fabrics and colour combinations, the gaudy African prints that hit the world fashion scene with a shock about the time she first began using them in Bermuda, and her usual ensembles of bright colours.

Next come her unique designs, like the tapered slacks of West African cotton that were her favourites in her first line and have been best-sellers ever since.

Her next love was the long-sleeved bathing suit of cotton knit that won a full colour page in Vogue and was the forerunner of an unusual Empire-style suit that is one of the features of her newest line. And her third favourite, still found in all her shops, is the long evening skirt.

In all her clothes she has made unusual use of detail and trim, highlighting blouses with intricate collars and cuffs, putting eye-catching waistbands on simple skirts, and picking up designs – even tartans – with shiny sequins.

Although she has worked with many fabrics, Mrs. Hornburg still prefers the cottons and cotton knits.

“I can’t get away form the knits,” she says, “they fascinate me.”

Occasionally she still models her own designs, but generally her days are kept busy with the defining, office work and the shops.

“I like to spend as much time selling in the shops as I can. I like meeting the people,” she says.

After Calypso came to town the Paget shop was kept open, and was not closed until this year when the Hornburgs left Girvan for a new home in Salt Kettle. A Boutique shop, also on Front Street, was opened about three years ago, and Calypso clothes have been sold in hotels and cottage colonies throughout Bermuda.

A plunge as big and breathtaking as the first bale of cotton came when Calypso moved to Jamaica. It was another successful one and the firm now has shops at Half Moon Bay and in Montego Bay.

At about the same time Calypso went north, to the United States, with such a bang that Polly Hornburg, her Paget shop, and her clothes were featured in a four-page picture story in Life magazine.

Until now, the United States merchandise has been manufactured in New York, and sold in specialty stores all across the country, including Saks Fifth Avenue, Neiman Marcus, I. Magnin and Co.

More and more, through the years, Calypso clothes have been used in high-fashion ads, in magazines like Harper’s Bazaar and Vogue, and in leading newspapers in New York, Dallas, Chicago and San Francisco. Every time they are mentioned, so are Polly Hornburg and Bermuda.

Mrs. Hornburg is just back form New York, where she sold her 100-piece 1957 cruise line and had an annoying, but somewhat complimentary, experience. Returning one evening to the suite in the Plaza Hotel where she was showing her clothes, she discovered that about 50 of the 100 pieces had been stolen. They were gone, without a trace, much to the consternation of the dignified but embarrassed management, and the subdued and red-faced house detectives.

“Of course the pieces that were gone were the ones that were selling the best. I just talked my way through the rest of the showings, and finally, after I’d spent days taking out skirts and finding no blouses to go with them, I began to see the funny side of the whole thing,” said Mrs. Hornburg. “And I felt complimented when I found I wasn’t the only one who had lost things, and that the thieves seemed to have taken clothes only from the very best designers.”

With this line Calypso takes another big plunge. The clothes will no longer be manufactured in the United States, but will all be made in Bermuda and Jamaica, the bulk in the busy workroom near the offices in the Mercury building in Hamilton. Fabrics, now gathered from almost every country in the world, will be be shipped direct to Bermuda, and the finished products will be exported from here.

Already the firm employs between 60 and 70 full-time personnel and piece workers, and the new work here will probably require more.

The merchandise in the shops continues to increase, with Calypso clothes augmented by formal gowns, sports clothes, straw goods and jewellery from many countries.

Polly Hornburg continues to design her unusual clothes. Appropriately enough, she has already received the accolade from local Calypso singers who have begun composing lyrics to “Polly Hornburg…Bermuda girl.”