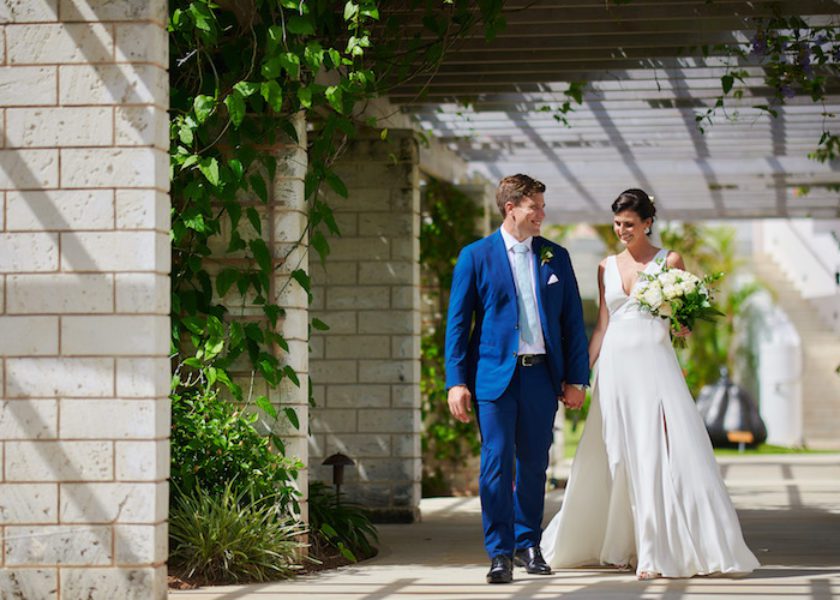 While living in London, Bermudian Nathalie West and New Zealander Darren Klein attended a group date. Set up by a mutual friend, it included four single girls and four single guys. But as it turns out, the outing was the first and last of its kind Nathalie and Darren have ever been on. Each had been living in London for several years, so it took a combined six years of living in the same city for the couple to meet.

From then on, the relationship continued to grow, until, on a visit to New Zealand, Darren proposed. “He proposed the day before my family was flying into New Zealand from Bermuda,” says Nathalie. “Darren timed it that way so that we could announce it to our mums at the same time, once we had all gathered in Queenstown. My dad already knew, of course!” the bride adds.

After settling on a wedding date of June 23, 2018, Nathalie and Darren began to plan the festivities. “We decided early on that we wanted bright and colourful flowers paired with a more laid-back, bohemian style,” says Nathalie. “We fell in love with the wild look of the bougainvillea flower during our travels through southern Europe. Once we chose that flower, everything else fell into place.”

When it came to her wedding dress, the bride knew she wanted “a fairly simple, well-tailored dress that wasn’t too heavy, given the heat in late June, with a train that would move with the breeze.”  After visiting no less than seven different bridal boutiques in London, Nathalie found her dress, a lightweight gown made from one hundred percent silk charmeuse by New York based designer Alexandra Grecco. “My mom and I fell in love with it as soon as I tried it on at Blackburn Bridal Boutique in Blackheath, South London,” she says.

The groom wore a custom made navy blue suit from Suit Supply in London, while the Groomsmen wore TABS Bermuda shorts with classic sports jackets from Ralph Lauren. “Darren felt strongly that he wanted the Bermuda shorts to be a feature of the wedding, and even changed into Bermuda shorts himself for the second cocktail reception,” adds Nathalie.

For their ceremony, Nathalie and Darren selected the southern-most point of the grass plateau of the Hamilton Princess Beach Club. The location overlooks the tennis courts and enjoys the expansive ocean view. “We were told by the hotel that we were the first couple to choose that particular location for a ceremony,” says the bride.

After enjoying champagne and cocktails up on the grass plateau, guests were transported by shuttles down to the beach pavilion for a second cocktail reception, followed by dinner on the sand.

At the reception, “we wanted people to feel comfortable – not too hot! – enjoy the natural beauty of the island and feel like they could easily kick off their shoes and enjoy the dance floor,” says Nathalie. “We loved the idea of guests sitting under strings of lights with nothing but the night’s stars overhead.”

When asked about the theme of their wedding, the couple says that they chose a “wanderlust” theme that would speak to their different nationalities and love of travel. “Given that Darren and I are from such remote places in the world and a number of our guests had travelled a very long way to celebrate with us,” says Nathalie, “we wanted the wedding not only to highlight that, but thank the guests for making the journey.”

In keeping with the theme, “each table represented a different city in Europe that Darren and I had visited together, with a particular focus on cities that are a little off the beaten track, such as Riga, Lativa; and Kotor, Montenegro,” explains Nathalie. There were even luggage tags featuring guests’ names and cities, which were used as escort cards. Guests were also greeted with personal messages from the bride and groom, which the couple had written on the backs of postcards from the city featured on each table.

“We loved thinking back to our favourite travel destinations during our time in Europe and picking out postcards to match,” the bride says. “Darren and I also wrote personal messages on postcards to each other, which we waited to read until that evening.”

Following the brilliant colour of the bougainvillea flower, the colour scheme of the event featured simple and playful pops of colour that complemented the natural settings of the venue. The bridesmaids wore dresses to match the bougainvillea, while the groomsmen wore light blue Bermuda shorts to match the ocean.

When asked about her floral style, the bride says, “I love colourful and wild looking flowers. The bougainvillea was the initial inspiration, but we also wanted to incorporate a lot of natural looking greenery with a particular focus on ferns, given that the silver fern is the national symbol of New Zealand.”

For the dinner menu, the bride and groom wanted to represent both their nationalities and so included some classic dishes from both Bermuda and New Zealand. “The Bermuda fish chowder was one of the choices for a starter, while New Zealand lamb was a main course favourite for the evening,” explains Nathalie. Additionally, “all of the wine served throughout the evening was brought in from the Mount Edward vineyard in Central Otago New Zealand, close to where Darren went to University.”

“In keeping with the bohemian style of the wedding, we chose a naked cake that showed off the multiple layers of the cake, with simple pink orchids and green ferns as added decoration,” notes Nathalie. The cake itself consisted of two of the bride’s favourite flavours: banana and rum. There was also a selection of plated desserts, including a choice of chocolate cake, which is Darren’s favourite.

All in all, Nathalie and Darren were thrilled with how their day turned out. Fortunately, the weather cooperated, despite a somewhat ominous forecast, and the day ended up being beautiful. Nathalie adds, “Some small things did not go as planned, but my wedding planners did such a good job improvising that I didn’t notice until I was told after the fact!”

When asked about what the most meaningful moment of the day might have been, the bride and groom were hardly able to choose just one. Ultimately though, “their favourite and most meaningful part of the day was reading the vows they had written and kept secret from each other until the ceremony.”

Also, the arch under which the couple was married held great significance because it was actually made by Nathalie’s step-father and Darren. “The fact that the arch stood the test of strong winds and looked so beautiful on the day was a massive relief and very special for us,” explains Nathalie. “We’ve since donated the arch to the Princess and it still stands in the same spot at the edge of the plateau.”

Nathalie adds, “Another particularly meaningful moment was a surprise performance of a traditional Haka by Darren’s groomsmen and family from New Zealand. It is a Maori tradition for the Haka to be performed at weddings to mark a milestone, but is perhaps more well known and associated with New Zealand All Blacks Rugby!”

When asked for advice for future brides, Nathalie says, that despite its being given often, this advice is absolutely true: the wedding day goes by so quickly that it’s important to enjoy whatever quiet moment you can with your husband. “We opted to prepare and read our own vows during the ceremony, and although it seemed a bit daunting when writing them, we are so glad we made the most out of such a special moment.”