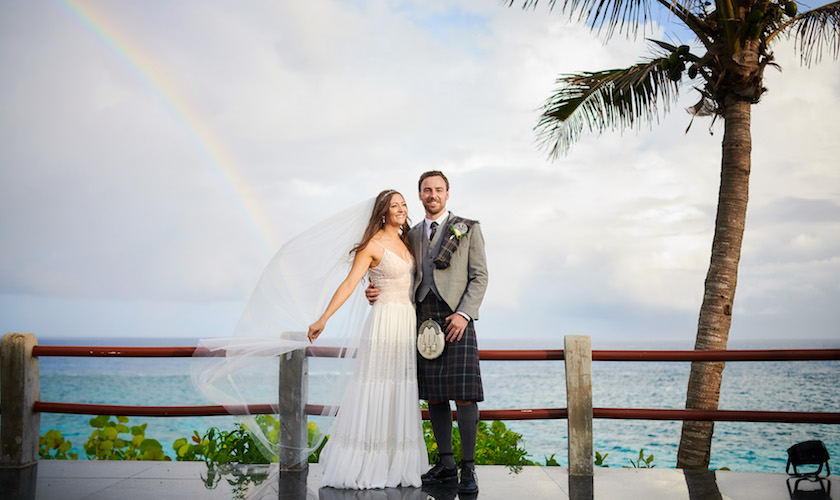 At a Halloween party in 2012, Zoe Kempe met Bennet Gibson. He was dressed as tennis star Andy Murray, while she was dressed as 50 Shades of Grey, complete with 50 different shades of grey paint samples attached to her dress.

“I think we may have caught eyes because I’ve always had a thing for tennis players and he must have been trying to figure out what I was dressed as!” laughs the bride. From that day, the rest was history.

The proposal came when Zoe least expected it. The couple had just spent Christmas in Whistler with the bride’s family for their first ski holiday, and the two of them had decided to stay on for New Years together in Vancouver.

“It was our first day exploring, and we went for a lovely walk through Stanley Park and along the beach,” recounts Zoe. “Bennet pointed at the sand to a pebble that had ‘Will you Marry Me?’ written on it. He then got down on one knee and held out a plastic toy ring. I put my hands on my hips and said, ‘this is the meanest joke you have ever played on me!’” says the bride. “I had assumed we’d stumbled across someone else’s proposal and a child’s toy. But Bennet said, ‘Actually Zoe, I’m not joking. I’m asking you to marry me!’”

Upon realising that Bennet was serious, Zoe excitedly accepted. It turned out that he had had to propose with a stand-in ring because Zoe had locked away the one he been planning to propose with – an antique family ring. “He had to dash to the toy store an hour before we left for the airport back in Bermuda, so that he had something to get down on one knee with!” exclaims the bride.

After the proposal, the couple began to plan their wedding, a sophisticated event with vintage touches. Zoe included her love of antiques though small details, such as vintage jewellery, a ride in an antique carriage and vintage doors used to display the seating plan at the reception. Another recurring element of the event was the monstera leaf, which was featured on the invitations, welcome tote bags, bridesmaids’ robes and table centrepieces, as well as wooden, hand-painted place cards that were gifts for the guests.

In keeping with the subtle theme, Zoe chose a dress that had a vintage feel to it and was timelessly elegant. “The dress was definitely the most exciting part for me,” she notes. “I went to New York with my mum, and we knew instantly it was THE dress! It was a special mother daughter moment for sure.” The bodice was meticulously handcrafted from lace and pearls and had a subtle sparkle, while the skirt was made from lightweight chiffon and silk, with two unique lace panels. “It was really comfortable,” she adds, “I never wanted to take it off!” And as the perfect complement to the details of the dress, the bride’s veil was simple and delicate and covered with tiny pearls.

When it came to her floral style, the bride chose to focus on greenery for its simplicity and romantic elegance. Greenery bedecked the tables and the pews at the church, while for her bridesmaids’ bouquets as well as her own, Zoe chose something a bit different from the norm.

“You probably can’t tell, but they are actually paper flowers, complemented with real greenery. A friend of mine made them for me as a wedding present, and they are simply incredible – plus, I get to keep my bridal bouquet forever!” Zoe says. And in remberance of her father, Reid, the bride also had a small photo charm of him attached to her bouquet. “In a way, he was still walking me down the aisle and was with me throughout the day.”

Zoe and Bennet chose to have their ceremony on June 02, 2018 at Christ Church Warwick, which is the Kempe family church. “It’s also the Church of Scotland, and Bennet is Scottish, so it just felt right in many ways,” Zoe says.

The reception was held on the Longtail Terrace at Coral Beach & Tennis Club, a place that the bride has always loved for its breathtaking view of the south shore. The menu was based on the ‘farm to table’ concept and so featured locally produced dishes, such as green salad and local rockfish. There was also a Bermuda fish cake canapé so that out-of-town guests could enjoy a taste of a local favourite. The wedding cake, made by Coral Beach’s pastry chef, was a fun combination of three different cake styles and was topped by the couple’s dog, Skyler. “I thought the cake shouldn’t be taken too seriously and should just be fun,” Zoe says.

The celebrations were a great success, and even included a surprise soca party, complete with branded towels for the guests to wave. “It got everyone on the dance floor, and the sea of pink towels flying about was spectacular!” says the bride. “Lamont is such an amazing performer, and I think he had just as much fun as we did! I don’t think I left the dance floor the whole night.”

But the element of the evening that was perhaps most outstanding was a surprise rainbow that appeared at just the right moment and reminded Zoe of her father’s presence on her wedding day.

“Just as everyone had sat down for dinner and we were about to be introduced, there was a huge rainsquall coming our direction. So we quickly greeted our guests, cut the cake and then ducked inside before it started to rain. It’s almost as if the squall swerved – it barely rained before this amazing rainbow appeared behind us!” the bride recalls.

“It was my dad telling me he was there. I was very close with him, and it was incredibly emotional not having him there on my wedding day. So that rainbow gave me a sign that he was with us, which was pretty magical indeed.”

In all, Zoe and Bennet say that their day was everything they had hoped for and more. Despite a bad bout of flu for Zoe in the two weeks leading up to the wedding and heavy rains during the first three days of the out-of-town guests’ stay, everything turned out perfectly in the end.

And when asked for advice for future brides, Zoe says her advice would be “to remember that it’s about the two of you and your love for each other and not about trying to please other people. No matter what you do, you are never going to please everyone. Don’t let anyone take away the magic during such a special time either. When else are you going to have so many people you love in one place celebrating something so important? Enjoy the planning journey together and keep it fun!”

To celebrate their marriage, Zoe and Bennet will take a honeymoon to several different places in September. “We are going to Rwanda to hike and to see the gorillas, Kenya for a safari and the Seychelles to relax after the adventures,” the bride says. Rather than a traditional wedding registry, the couple had a ‘Honeyfund,’ so that guests could give them experiences instead of things. “People had a lot of fun choosing from all of the different activities, such as a hot air balloon safari, a bush breakfast and even our gorilla permits,” she adds. “We both love to travel, and this way we will start our married life together with some incredible memories that will last a lifetime!”