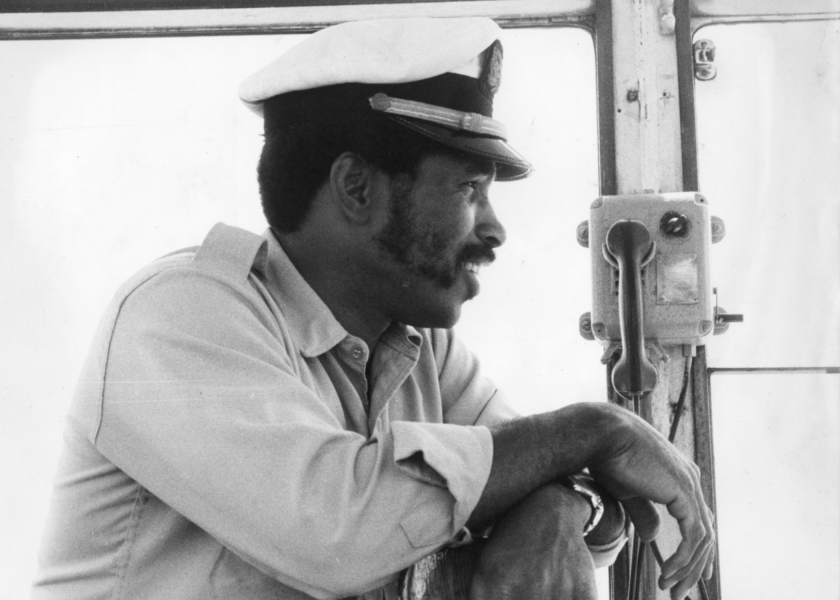 Riding the Waves of Change: The Life of Pilot Peter Simons

When Lauren (Peter) Simons was a young student at Purvis Primary in Warwick during the 1950s, he probably never thought he was destined to have a forty-year-long career on Bermuda’s seas, retiring in the new millennium as a senior tug pilot. After all, seafaring was not in his immediate family history. And yet—there was an omen. The first to admit he was never interested in school studies, he remembers often being distracted from his books by the steam whistle of the old Corona ferry. He would gaze out of the classroom window and watch her gliding to and fro across the Great Sound on her Hamilton/Somerset run.

Born to Mabel and Stanley Simons, Peter was the third of five children—Stanley (Junior), Maxine, Owen and Linden, who was deaf. Their father was a mason but for a time was also a restaurateur after he bought Primavera restaurant on the corner of Court Street and Church Street. For Peter, moving to Hamilton meant a change of school. While his older brother and sister were already attending the Berkeley Institute, he switched to the Central School in Pembroke. But, as he says, the school was not a good fit and so eventually he returned to Purvis for one and a half years. That meant cycling there and back every school day.

When Peter was ten, tragedy struck. At the age of forty-two, his mother died from a stroke which not only meant grievous loss but also much greater responsibility for the young children within the family. Peter and his sister Maxine were charged with running the household and did the cooking as well as the cleaning. However, there was some respite for him with his peers. From the age of eleven, Peter was a member of the Sea Scouts whose headquarters were nearby on the corner of Court Street and Victoria Street. Not realising it at the time, the activities he shared with other Sea Scouts would, of course, prove invaluable. He learned rowing and basic coastal navigation; he learned how to tie and splice ropes, use morse code and, at the Martello Tower in Ferry Reach, send messages using semaphore.

Unfortunately, the Primavera restaurant, eventually sold, brought debt, so extra financial contributions to the family became vital. Leaving school at 14, Peter worked full-time during the summer of 1959 packing groceries at Marshall’s food store in Paget. He proved so reliable and observant he was put in charge of the storeroom. In January 1960, for better wages, he became a full-time office boy at ZBM on Bermudiana Road. As he says, he was never one to sit still—he always had to be doing something, a character trait that would hold him in good stead in the working world.  So, often, he would go upstairs to the television studios where soon he was operating the TV cameras.

Meanwhile, his father had heard about an opening for a deckhand in the ferry service. Martin Hutley, an administrator for the Board of Trade, gave Peter the opportunity on the strength of his Sea Scouts training. So, at the age of 15 and a half, on May 23, 1960, Peter accepted the position, joining the captain, engineer and another deckhand, Herman Burch, aboard the old Laconia which carried passengers on the Warwick/Paget/Hamilton run. For the grand sum of two shillings an hour, he spent his days cleaning and polishing the boat, untying and tying the boat up and generally helping the passengers. Hutley never regretted his decision, telling Peter he was the best deckhand “I’ve got around.” No wonder Peter was given permission to attend the 1960 Bermuda–Canada Scouts’ Jamboree in Ottawa.

Being friendly and welcoming to Bermuda’s visitors was an unofficial duty for the staff which wasn’t difficult for Peter. He enjoyed meeting the many American tourists who took ferry rides on the Laconia, and this was to prove providential. One of the tourists suggested he should improve his position by training to be a pilot. Aged 17, he followed that advice and for three years trained on the job under different captains—Willy Lightbourne and Reggie Burch on the Laconia and the Dragon and Cecil Smith on the Georgia. He spent much time learning all about the vessels and studying the charts, which he had to know by heart. Fortunately, he had an excellent memory and sense of direction on land and on the water. In 1963 he passed his oral exam, “becoming the youngest pilot ever to wear the khaki uniform and cap.”

The same year as captain of the Laconia, he remembers experiencing the first hurricane under his watch, Hurricane Arlene, which caused about $300,000 of damage to Bermuda. “I was asked to take folks from the Ferry Terminal to White’s Island,” he recalls. Docking to let the passengers off proved tricky and he backed into a punt, damaging it. “Because of the wind’s direction, I decided to go to Darrell’s Wharf but the waves were so strong I had to go via Hinson’s Island.” Piloting some of the older ferries then meant communicating with the engineer by bell since it was the engineer who was responsible for changing the boat’s speed and direction. One bell sounded the command to go forward, two to reverse. “So I rang the bell to James [James Stewart was the engineer] to put the boat’s gear into the right position. I finally got to Darrell’s Wharf but had to stay there for two hours until the eye came over. Then I could make it back to Hamilton.” He captained several ferries, including the old Dragon, which daily left Hamilton at 7 a.m. to take Bermudian workers to the US Naval Annex, the Laconia, and later, in 1968 when he ran the Somerset route, the Triton and the Corona.

There’s another reason 1963 was a very important year for Peter. While captaining the Laconia, his camaraderie with passengers became even more significant. Tired of bitterly cold Manchester winters, young maths teacher Miss Susan (Sue) Wilson had recently arrived in Bermuda from the UK to take up a position at Prospect School for Girls. She little thought that 33 years in the future she would retire from Bermuda College as Registrar. But in 1963 she was looking for an affordable apartment. She found one she liked—a studio apartment on Hinson’s Island, which meant taking the ferry from Hinson’s to and from Hamilton. Who did she meet on the ferry? Peter, of course, in his role as captain. Now, some fifty-eight married years later, they still remember their first date—PT 109, the movie about John F. Kennedy’s military experience, shown at the Rosebank. Often, Sue would join Peter on the ferry during his evening shifts (5 p.m.–midnight) so they could spend time together. However, soon they would come up against a harsh reality: the strong racial prejudice of the time.

Although the 1959 Theatre Boycott had resulted in official desegregation in Bermuda, in the 1960s there was still widespread social opposition to interracial relationships, as Peter, black, and Sue, white, discovered. As Sue recalls, the Hinson’s Island community was a private club, some of whose members were against racially mixed relationships. Once it was seen the young couple were dating, Sue was “politely” asked to relinquish her lease. Her accommodation problems did not end there. Moving in with two white friends in a Flatts apartment, she was again asked to leave because the landlord, having some connection with Marine and Ports, knew of her relationship with Peter. If she did not leave, he told them, the other tenants would be evicted. In addition, Peter’s sister was opposed to their relationship.

Life became even more complicated when Sue became pregnant and for that reason was asked by the Department of Education to resign. Finding rental accommodation for both of them seemed impossible, but eventually they were offered an upper one-bedroom apartment in Craig Appin, a gracious two-storey house, complete with verandah, on Wesley Street in Hamilton. Here, after tying the knot at the Registry Office in 1964, they started their married life. Life at Craig Appin could be interesting since Motown celebrities such as The Temptations, coming to perform at the 40 Thieves on Front Street, roomed on the bottom storey which was without a telephone. They both remember Dionne Warwick popping by and asking to use their phone. Because Sue was not covered by insurance for maternity, she went back to England for their son’s (Andre’s) birth. Returning to Craig Appin, appropriately the day before Mothers’ Day, Sue soon became pregnant again, eventually giving birth to their daughter Lauren at home. This time she was covered by insurance since she had an accounting position at AIG.

Despite the challenges the couple faced in the early years of their marriage, in due course they were able to buy their own house on Knapton Hill, after renting apartments on Khyber Pass. Sue was able to go back to Prospect, and then to teach at Whitney Institute and Warwick Academy before joining Bermuda College. Peter went up the ranks, becoming senior ferry pilot and, as he says, “earning reasonable money.” Promotion from the ferry service meant either becoming a branch or a tug pilot. A tugboat position became vacant, and Peter trained for it under Maxwell Burgess. In 1975 he took over from him as captain of the Faithful. This meant he was on 24-hour call to meet cruise ships and other ships coming into dock at Dockyard and St. George’s. He recalls a few adventures, including landing on the rocks in order to save the Volendam from doing so in the Town Cut. As a thank you from Holland America, Marine and Ports staff enjoyed discounts on the Bermuda/New York voyage. Another time, sometime in the 1990s, he remembers rescuing a Russian freighter caught in a storm 250 miles off Bermuda. That involved the tricky operation of attaching a tow line and towing the freighter into Bermuda, which took a day and a half.

Over the course of his career, Peter saw many changes in marine technology. Replacement ferries and tugboats, often being given the same names as their predecessors, were more modern altogether. No longer, for example, was an engineer needed to change direction on any of the ferries. The steering wheels had control over direction. And in 1988, when Peter took over the brand new Powerful, he was confronted with a joystick instead of a steering wheel. Peter looks back on his career with no regrets. “I was outside, doing my thing with a good crew to work with. I had a good time.”

Retirement did not mean Peter and Sue became landlubbers. Between 2001 and 2020, during the first six months of the year, they sailed around the Eastern Caribbean in their boat, Lorensu, a 48-foot Westerly with four cabins. Initially based in St. Lucia and later in Martinique, they have sailed all of the Lesser Antilles except Barbados and Barbuda. How fitting is that given their romance began aboard a Bermuda ferry called the Laconia?