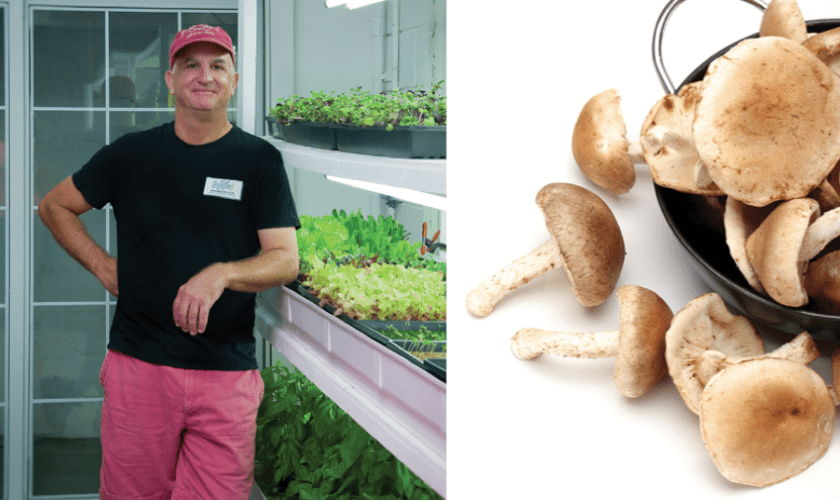 After the worst of Hurricane Joaquin had passed by early this autumn, one Bermudian farmer returned to his crops to inspect the damage. Despite winds still whipping the island at upwards of 30 knots, a neatly arranged cornucopia of pea shoots, arugula, basil, shiitake mushrooms, and others remained unharmed, save for a little wilting.

But this wasn’t divine coincidence.

Unlike most of Bermuda’s farmers, Scott Tucker had little to worry about. The BermyFresh farm, founded, owned and operated by Tucker, can be found inside a warehouse at the bottom of the small industrial hub in Warwick known as Wellbottom. Tucker has taken this unassuming building and turned it into a roughly 4,000-square-foot concrete greenhouse — 1,500 feet dedicated to gourmet greenery and 2,500 feet for shiitake mushrooms — a process known as “vertical farming.”

Indoors, there’s no accounting for rain and sun, or hurricanes for that matter. All Tucker’s plants need is contained in the rows of LED lights above them — tuned to emit only the red and blue frequencies of light needed for photosynthesis — and the mineral-rich water constantly pumped into shallow troughs beneath. The mushrooms are grown in a similarly controlled room, where the temperature, humidity, and even carbon dioxide levels are adjusted to provide the precise environment in which shiitake thrive.

“Agricultural entrepreneur” might seem an odd career change for a man who’s spent his life as a photographer, but the basic processes of developing photographs and growing plants indoors have a lot of similarities.
“I have a brown thumb,” explains Tucker.

“When I put things in the ground, they die. I know nothing about agriculture, but I do know how things need to work in a controlled environment, and I thought I could translate that past experience into future success.”

The concept of vertical farming is rather simple. By growing food in office buildings or warehouses using artificial light and hydroponic cultivation—a water-based growing system that doesn’t require soil—a vertical farm can produce in a tight space what would normally take hundreds, if not thousands, of acres of valuable arable land.

The capital costs to get started on a commercial basis are lower as well, along with operating costs. An urban farm requires less labour, land, water, fertiliser and heavy equipment. And by selling to a local market, shipping costs and product spoilage are also practically eliminated, resulting in a fresher, tastier, longer-lasting, and more nutritious product.

With the availability of local produce limited by seasonality, climate and a scarcity of arable land, the business signals an exciting new era in the gastronomic fortunes of Bermuda’s perpetually starved locavores.

But despite the ever-increasing, almost ravenous desire for local produce, Tucker has no plans to flood the market. The idea, rather, is to provide Bermuda’s restaurants and supermarkets with a taste of exotic greenery and an assortment of mushrooms, adding fresh, flavour-loaded accoutrements to the plates gracing our cedar dinner tables.

“We want to ‘augment’ agriculture, not replace it,” he says. “What we do will not replace traditional farming, but it will add a new dimension. We don’t want to compete with the other farmers. We just want to find our own niche that adds value, is fresh, cost-effective, and organic.”
Beginning with “microgreens” — shoots of salad vegetables — the first objective, says Tucker, was to break into the fine-dining scene, a cue he took from his brother, James Tucker, of Tucker’s Farm Goat’s Cheese.

“We chose microgreens as the highest end, easiest thing we could produce that nobody else is doing. We wanted to create our own little niche market.” After a few months selling directly to Bermuda’s finest restaurants, word was rapidly spreading among Bermuda’s chefs. With that relationship established, the idea was to start producing more. Specifically shiitake mushrooms.

“Microgreens were how we got into the business. They gave us that entrée, and eventually we began growing the mushrooms at the same time, which we chose as the bigger, more lucrative kind of crop, which we could produce in a higher volume and sell to supermarkets.”
Mushrooms are notoriously difficult to grow, but the shiitake is robust and, by comparison, much easier to produce. Despite this, Tucker recognised the need to educate himself as much as possible, attending events and workshops in the US where he learned at the hands of North America’s biggest mushroom farmers.

After just over a month in production, the local response to the mushrooms has been tremendous, he says. It is already a struggle to match the market demand. For now, the goal is to be producing anywhere between 200 and 500 pounds per week, with a look to expanding that to more than 1,000 pounds by the end of the year.

The idea had been rattling around in Tucker’s head for almost a decade—after he first read an article about vertical farming in Popular Science magazine—before he began entertaining it with any sincerity. But the decision to pivot so drastically after a highly successful career in photography was not made lightly.

After the global economic collapse in 2008, Tucker’s warehouse began seeing an exodus of tenants. “What it came down to was the recession,” he says. “Loads of people were leaving the warehouse. As they say, necessity is the mother of invention. That empty space was what pushed me. It became so much work just trying to get people in, spending money to get them in, and then six months later they would be behind in rent.”

It’s been a steep learning curve, he says. Perhaps steeper than he originally thought. “Let’s put it this way… YouTube makes it seem a lot easier than it actually is.” But through some clever networking, in particular with Green Spirit Farms of Buffalo, New York, the normal growing pains that come with starting any new business have been eased… at least a little bit.

“There have been a few setbacks, as you do,” Mr Tucker admits. “And of course it also takes a great deal of money. But it’s turned out to be a lot more fun than I’d have thought. It’s a lot of hard work but it’s rewarding.”