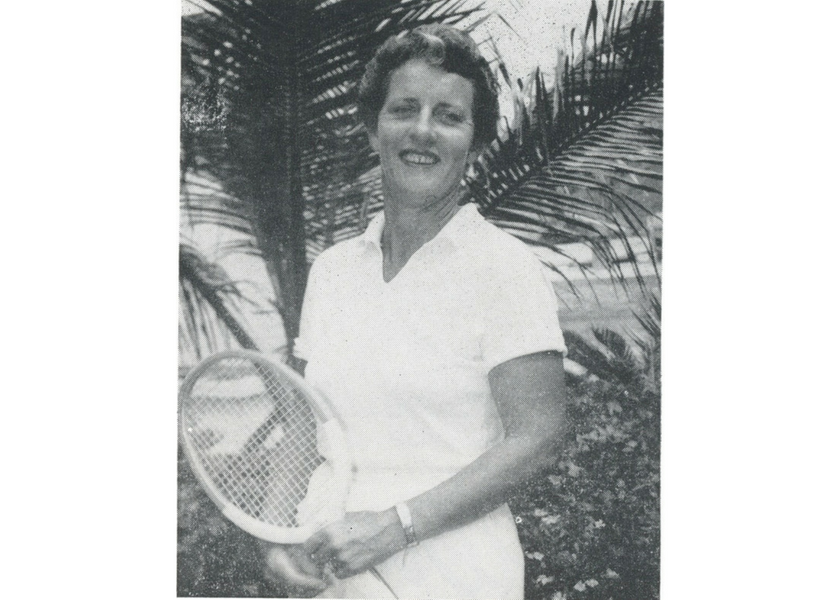 This article first appeared in The Bermudian in September 1955.

Blonde energetic Sheila West Gosling was described not long ago as “one sure exception to dynamite coming in small packages.” To the uninitiated, the tall (5’8″) husky Mrs. Gosling is a carefree, casual, enormously friendly tennis and golf title holder – and a party girl whom everyone likes and most people know choice stories about.

But there is considerably more to this blue-eyed, vivacious sportswoman whose spontaneous laugh and innate love of fun make one feel good just by coming in contact with her. Now in her late thirties, she looks little older than she did back in 1934 when she was chosen Bermuda’s first “Queen of the Easter Lily Pageant.” How did she get chosen? “I guess I just looked healthy,” she laughed.

She has been a natural athlete all her life, started playing tennis seriously when she was eight and is equally at home on the golf course (she has a handicap of 10), at the tiller of a Luders 16 or a Fourteen Footer, or driving a team of horses (she once drove a cart horse from Hamilton to Shelly Bay in 17 minutes). She can bake a cherry pie; at her wedding to William Gosling nine years ago she made her own wedding cake, enough for the 900 guests who flocked to the grounds of the West family home, Shelly Hall.

In her teens, she was such a strong, graceful swimmer that she was asked to train for the Olympics, but the war came along and that ended that. She did seven months’ training as a probationer at King Edward VII Memorial Hospital, and has always been glad of her basic nursing know-how which comes in mighty handy with three husky outdoor youngsters.

Her three chicks, Gregory, 8, Deborah, 7 and Fiona, 6, are tow-heads like their mother. They have her straight-forward approach with people and are completely adept and comfortable at entertaining visitors with scrapbooks and photograph albums. Sometimes they are over exuberant, as when their kindergarten teacher rushed out to find them in their mother’s car pelting passers-by with fresh fish. By the time their teacher reached them, they had littered the street with fragments of fish and sent pedestrians running for cover.

Rosewood, where the Goslings live in Paget, is a lovely old home over 200 years old. It is situated on what was once a 42-acre estate and is Mr. Gosling’s birthplace. The whole family loves animals. Before their marriage, Mr. Gosling had a pet pig who followed him everywhere. Now there are four dogs – Betsy, a Great Dane; Ridiculous, Silly Billy and Hyena, the last three of indeterminate breed. William Gosling intended at one time on being a dog breeder and Betsy was imported from England as a start. But she proved sterile, a fact that still rankles in the Gosling menage.

Sheila, who enjoys animals and children, has natural good humour that keeps her calm and unruffled in the midst of both. She is scared to death of guns, however, and shivers when her young son even holds an ancient show rifle. Her pet peeve is people who leave broken bottles on the beach or roadside, and she once was so enraged to see a car driver throw an empty coke bottle out his window that she chased him all the way from Paget to Riddell’s Bay. When he stopped, she stalked over and said: “Next time I see you throw a bottle onto the road, I’ll find the biggest jagged end and beat you over the head with it.” She slammed back in her car and took off in a cloud of dust, leaving the culprit shaken and speechless. She has enough Irish in her from her father, Arthur Wellington West’s side of the family, to be a terror when roused.

“Not bad” is the word for most efforts of this fun-loving, warm-hearted Amazon, who is genuinely modest about her athletic medals. She is pleased, however at having won two years in a row the Bermuda Ping-Pong Tournament, in 1941-42. That was when the local Services Club was in full swing, and the Coral Island Club was U.S.O. headquarters to visiting service men from Britain, Canada, the U.S., France, Australia and New Zealand. Though you’d never hear it from her, Sheila West did a monumental job in helping to organise the volunteers who worked for the U.S.O. She was cook, athletic director, interior decorator and even janitor, but when asked about it she gives credit to others.

“People like Justin Morrell, Mrs. J. J. and Mrs. Arthur Outerbridge and many, many others did far more than I ever did,” she says sincerely.

Many times a golf medallist (she holds two trophies from Belmont Manor tournaments, two Riddell’s Bay medals and has been in the Mid-Ocean championship fights several times), Mrs. Gosling is probably the best sport on the golf course once could find. Despite her apparent iron nerves, she is so keyed up before a tournament that she often can’t eat. So she got in the habit of carrying four hard-boiled eggs in her golf bag.

“Sometimes for fun, I’ll tee off with a hard-boiled egg,” she chuckles. (Not in a medal round, however.)

Her endurance reached a zenith last season when she played a 36-hole tournament in a morning and went on in the afternoon to win the Bermuda Lawn Tennis Club’s doubles championship. This year she became the Club’s women’s singles tennis champion, after being runner-up many times. She defeated Mrs. John Knowlton and confesses she was completely surprised, as she thought she was losing. The match lasted two hours and 35 minutes, and as Sheila and Mrs. Knowlton staggered off the court, Sheila remarked:

“And here I’ve been the best runner-up on the island for 37 years.”

On her father’s side, Sheila is Irish. On her mother’s side, she is of French and English extraction. Her paternal grandfather, the late George West, was one of the earliest shippers of Bermuda Easter lily bulbs to the U.S.A. Sheila, whose father, Arthur West, built up almost a legend for his physical strength and who today at 79 still goes to his office every day, is one of five children. Born at Shelly Hall, Shelly Bay, she used to play with a wire racquet on the concrete courts at the house. Her mother, the former Ruth Malecon Rutherford, was a keen tennis player herself and when she noticed her 8-year-old making some really outstanding shots, she presented her with a proper racquet and later with tennis lessons from professional Mercer Vesley. At 15 and 16, Sheila won the junior tournament of the Bermuda Lawn Tennis Club.

Her brother, the late George Wendell West, was a phenomenal golfer, who at 16 won the medalist round at the Mid-Ocean Club with a score of 66. He settled in Australia before the war and was killed in 1942 serving with the Australian Army.

Another brother, Billy West, as likeable and colourful as Sheila herself, won plaudits last year when he kept Ghunda, the first elephant ever seen in Bermuda, who was stranded in Bermuda between ships to New York. The whole Colony took a delighted interest in Ghunda, and people would call round at any time of the day or night to “see the elephant, please.”

“It was better than Cup Match,” recalls Sheila. “I wanted Billy to charge a shilling admission and raise money for the Red Cross Fund for the Blind, but he said, ‘Let’s be different and give people something for nothing.'”

There are two other West girls, Phyllis, now Mrs. Hal Harron of Essex, Conn., and Marion, now Mrs. Arthur Scully who runs her own travel agency called The Four Corners in Evanston, Ill. Sheila also has a half-brother, Dick Rutherford, who owns the historic Tom Moore’s Tavern. The family have always been outgoing and friendly and in the old days at Shelly Hall, the place was constantly filled with lively young people.

Once, Sheila and a girl friend got on the seating committee of a banquet for visiting tennis stars. They forthwith placed themselves on either side of the most sought-after male tennis star. Both girls arrived wearing filmy formals, with sheer bodices under which ere opaque slips. As dinner progressed, Sheila noticed her friend’s slip strap had broken and that her slip had worked down to her waist, so there was now nothing between her skin and the outside world but transparent organdy. Sheila reached behind the tennis idol and gave her friend a poke. After dinner, as they went to the powder room, her friend glanced down and with horror saw that she was very much exposed. She spluttered at Sheila for not telling her about it.

“Oh I gave you a poke hours ago,” was Sheila’s complacent reply, “but you were talking to someone, so I forgot about it.”

An inveterate party lover, Sheila’s entrance will bring a lift into the dullest gathering. Her sense of humour is sometimes slapstick, but she is very shrewd at sizing up an atmosphere and often plays the clown herself to put someone else at ease. Like most generous people, she is also very impulsive. Some years ago, she appeared in court on a charge of allowing someone else to drive her car (which is against the law in Bermuda), and had her license revoked for a year. She was so incensed that she announced to the magistrate she would leave her car outside his courthouse for the year’s duration. When she was told she couldn’t do this, she took a display-size advertisement in the daily paper offering her car for sale to the highest bidder, explaining just why she was doing it. Her action prompted the magistrate to look into her insurance policy, find it covered accidents by another driver, and her license was restored within the week.

Sheila’s lusty enjoyment of life makes her capable of mustering up a laugh even in the face of tragedy. When her mother died three years ago in a New York hospital, Sheila was with her. Her father was simultaneously having an emergency operation in another New York hospital. Sheila was shuttling back and forth between two critically ill parents when a cable came from Bermuda that her youngest child was ill with pneumonia. She telephoned the doctor to find out the child’s condition, and was advised to stay where she was. At the end of a 19-hour vigil at two hospitals, she got into a taxi to return to her hotel. She was wearing silver fox furs at the time, and with her striking blonde hair and blue eyes was a lush sight. The taxi driver, when he let her out, said hesitantly: “Say, ma’am, are you a movie star?” Mrs. Gosling, almost beside herself with worry, stared at him and suddenly exploded into a peal of husky laughter. “Driver,” she said, “you’re in the wrong profession. I felt 100 years old when I got into this cab. Now I think I can face tomorrow.”

As another lady of considerable charm and consequence in Bermuda remarked, “Yes, Sheila is quite a gal.”