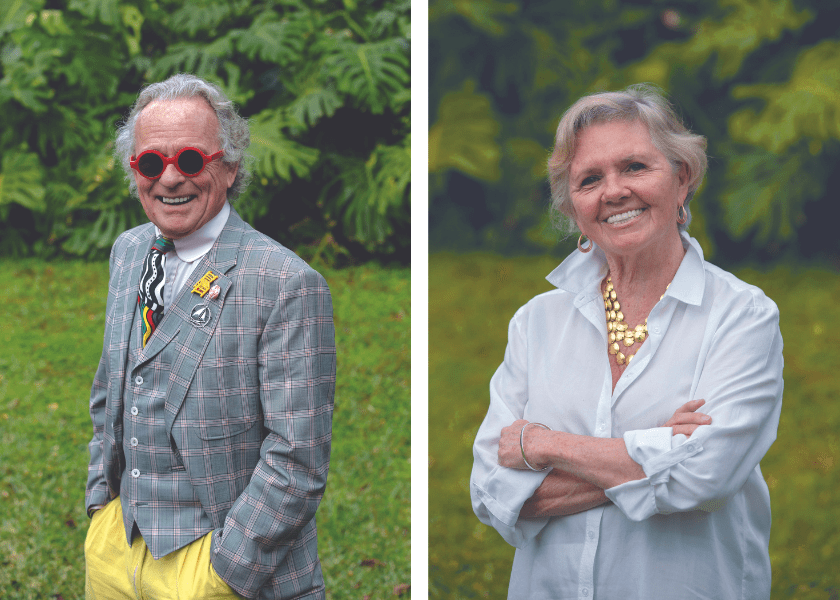 The End of an Era

A penny for your thoughts on wrapping up your role at Masterworks after such a long and successful career?
Tom Butterfield: The emotions run all over the place. I do have good days, and I do have bad days. It’s [my time with Masterworks] not terminating as such, the process is taking on another dimension. That dimension will be, I enjoy the hunt. I love looking for Bermuda stuff. I’ve scoured the earth, I’ve had fun doing it, I’ve had fun bringing it all back, I’ve had fun making it all happen. What I like doing is creating a problem and finding a solution.

When we’d find these things and people would say, ‘Well where are you going to get the money for it?’ I’d say, ‘I don’t know but we’re going to make it happen one way or another.’ I do ask myself how will I wake up on February 7th, because February 6th will be our last fundraising night. Will I wake up and suddenly think, ‘Whoa, do I have a sense of purpose anymore?’ You have to go through that. Right now, I still wake up every day at 5:00 a.m. knowing that there’s some challenges I look forward to rising to.

The big thing is, having thought through what we did, how we started out… the challenge was that we would run out of ideas, run out of money, it wouldn’t work, and all the rest. Seeing it now as one of the great, great legacies—and that’s not me talking, that’s what others have said to me—that washes over us, that we have assembled not just great artefacts, but we’ve also assembled great programming. We’ve been able to blend the two together.

What was the challenge in getting Masterworks ready to be handed over?
TB: We want to start Risa [Hunter] off with a completely clean slate. We’ve taken down our overdraft to zero, we’ve taken down what we owed our suppliers from $300,000 to all-current. We’ve paid down our Butterfield Bank loan which was a hangover from the building project. We owed $1.4 million, and we’ve taken it down to just under $700,000, so it’s been good.

Elise Outerbridge: It’s a great legacy for Tom being able to do this for those that come after us. My whole thing is, we had the fun part. We were the renegades. We had no responsibilities. We didn’t have a building to take care of, we didn’t have overdrafts, we were just out there being these art renegades, collecting artwork and moving them around. And because we didn’t have the responsibility of staff and facilities and things like that, we could pretty much do whatever we wanted to do, think whatever we wanted to think, and the sky was the limit. We had no restraints on us in the beginning. It was that creativity and that energy that really pushed us to the place we are right now, and hopefully it will push future generations.

What Tom has always said to me is, ‘Always go back to the artwork. If you keep that in mind, keep it as your north star, everything else will fall in place.’ And for me it absolutely came true. The minute you start questioning yourself, you just look at the collection, you look at what’s come out of it: the educational programmes, the tourism initiatives, we never ran out of ideas.

I’m hoping that we’ll be able to stay as part of the curatorial process here. I think it would be silly to take our 34 years of knowledge and not use it. We’re lucky to have a great team right now. It’s an all-Bermudian staff who are really enthusiastic and coming up with new ideas.

TB: We do have a great team.

Leading that team is Risa Hunter. Can you tell us a bit about the search process and why you settled on her?
TB: It was pretty straightforward. We had searched for a few years. We were being pushed on in the search by some of our benefactors. Some of them were concerned about the fact that we wouldn’t find someone who wanted to take on the whole succession process. Oddly enough we started about three years ago. We thought we had someone, nope. We thought we had someone else, nope. And then Risa came along, and we said ‘Yep, she looks like the one.’ But then it was suggested that we do the democratic thing and put it out to the general public, so we did. We put an ad in the paper and we got 20 applications, one of which was from overseas. All the others were local. I was amazed at the talent that applied for the job. I was pleasantly surprised that 20 people wanted the post—it meant something to me—knowing that no two days are the same and every day you’ve got to wake up and think about how to put money in the bank.

We had a selection committee made up of six members of the board. We got it down to six final candidates, and then we met as a group and decided then and there who we thought was the most appropriate candidate, and it was unanimous that Risa was the person of choice. It was pretty obvious. Then we went around the room to get everyone’s thinking about why we zeroed in on Risa, and a lot of it had to do with her competence, her articulation, the idea that she is socially agreeable. As I’m fond of saying, we’re in the hospitality, entertainment and education business.

Going back a bit, can you describe the process of beginning Masterworks all those years ago?
EO: Funnily enough Tom and I worked together at A.S. Cooper’s in 1970. I’d just arrived on the island, he was just coming back from school, we had a lot of things in common. We had similar interests in art and just about everything else. Then he went off to Canada, I had children, and when he came back to Bermuda I saw him on the street one day, I’ll never forget it. He was on Reid Street over by where Medical Hall was. And he said, ‘Hey! I’ve got this great idea you want to do marketing for me?’ And I was terrified. I ran the other direction. But then when he started doing those Community and Cultural Affairs exhibitions at City Hall in ’86 or ’87, right?

EO: ’85! I became really involved and volunteered for a few of those. I was able to bring my love of art history which I learned at NYU back to Bermuda, so I started volunteering and it just grew from there. It was interesting because Tom had put together a collection and I’ll never forget, because we had a lot of naysayers that just thought we were flakes and somebody else should do the job.

TB: They were worse than naysayers.

EO: The thing that really pissed me off the most was when somebody who pretended to be an expert looked at me and said, ‘It’s just a tertiary collection. It’s not important.’ And that really made me angry. I started researching the artists that we had collected and realised we had a basis for a really incredible collection. And then came along the Winslow Homers, the Georgia O’Keeffes, and that’s what really put us on the map.

What were the doubts people had about the project that you mentioned?
TB: Oddly enough they were mostly Bermudians of the business establishment. And they were dead set against what we were doing. And the funny thing is, Cooper, you certainly don’t remember this, but when we said, ‘We’ve got this idea and this is what we’re going to do,’ there was a group who one by one, and then as a group one night, took me out and sort of put me over a barrel to try and prevent me from doing it. So I said as long as I don’t see any evidence of people actually doing anything [to stop us], we’re going to carry on.

There was this thing called The Bermuda Fine Arts Trust, which became the National Gallery, but because we were doing what we did, we actually woke them up out of their slumber and got them off their asses to do something! In fact, it was in 1987 that we did a brilliant little show called Interiors where we build a little cottage where the National Gallery is now, because it was just a barn of a room, we built a little cottage in there and we put in a Georgia O’Keeffe drawing as part of the lure, the hook to get people to come in, and it worked.

EO: And it eventually became a part of our collection. Every time we borrowed a painting for some reason, I can’t think of many that we’ve sent back to the owners. Like the Winslow Homer we borrowed, and we had no resources whatsoever to purchase it, but some very generous Bermudian trust came along and purchased it for us. They had so much faith in us they gave it to us outright. To me, most of our collection has been built on our belief in what we’re doing, Tom’s ability to pull rabbits out of hats, and an incredible trust from our constituents who really believed in us from the very beginning.

Do you have any favourites among the collection that you’ve added throughout the years?
TB: No, but there’s been some surprises for sure. One is a photographer called Elliot Erwitt, and he got an assignment here in Bermuda and did some photographs of College Weeks at Elbow Beach. That was 1953. Because photography is in my blood and DNA it was a major surprise for me [to find], it was brilliant. So we now own a Bermuda vintage print by Elliot Erwitt and we’ve been offered a number of his Bermuda works, but they’re modern prints and right now we’re going to leave them alone. I think that’s for the next person to find out. But we know that that’s there.

The one that’s really gotten away from me is another photographer, and he started his photographic career as a result of being on a honeymoon here, and that’s Aaron Siskind, another very influential American modern abstract photographer. He did some amazing work. Anybody who studies photography comes across his body of work big time.

I guess the biggest surprise to me was being able to return a third Winslow Homer. We had known about Homer’s one and two [paintings], but it was when the third one came home that we really had underwritten the statement that we are the home of Bermuda’s greatest treasures, and here they are. I often think, ‘Do I have any regrets about doing it the way I did it?’ Absolutely not. If we had come up with a game plan and laid out spreadsheets, and all these things…

EO: It never would have happened.