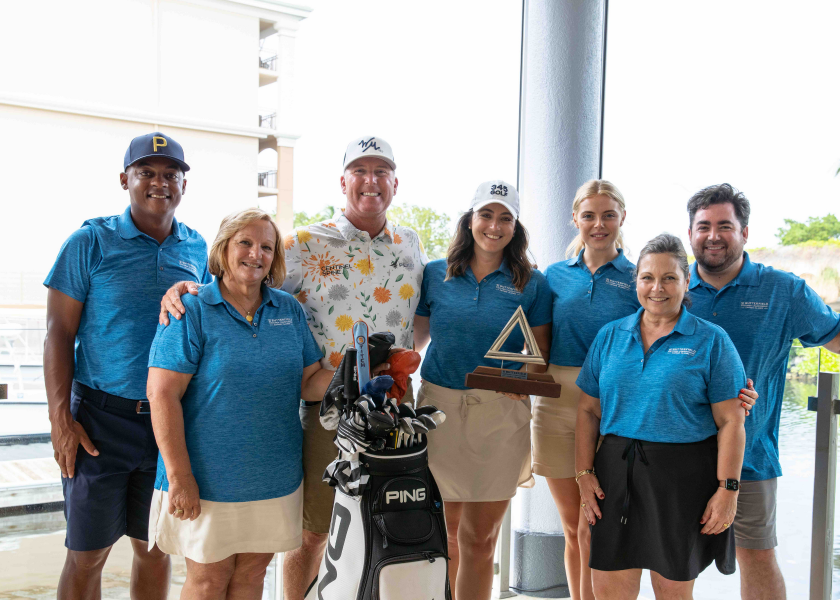 Sponsoring a PGA Tour golf tournament should involve some fun. Butterfield Bank, co-title sponsor of the Butterfield Bermuda Championship, takes that sentiment to heart and is spreading the feelgood factor to other markets in which it operates.

To that end, Butterfield Customer Championship events have been held in both the Cayman Islands and the United Kingdom, giving 40 of the bank’s most valued clients in each market a taste of the tournament excitement.

There’s also a strong incentive for the players to show up with their A-game: the top five individual finishers from each event win a trip to the Butterfield Bermuda Championship. Travel and hotel expenses are covered by the bank, and the winners also earn a place in the official Pro-Am tournament to be played at Port Royal Golf Course ahead of the main event.

Team trophies for each customer event resemble the triangular Championship trophy. Instead of being made from Bermuda cedar, however, the UK trophy is made from British oak, while the Caymanian version is made from Caymanite, a distinctive, multi-coloured rock unique to the Cayman Islands. Other similarities, from the tee fences to the uniform colours, will bear similarities to the Championship, representing strong ties to the tournament and to Bermuda, where Butterfield is headquartered.

The Butterfield customers play on courses of the highest quality, with the Ritz-Carlton Golf Club on Grand Cayman having hosted the first event in May, while The Grove, in Hertfordshire — which has hosted both the World Golf Championships and the British Masters — staged the UK event in June. The single-round events feature professional administration standards too, as they are run by the same team that oversees Bermuda’s PGA Tour event.

Danielle Baiunco, tournament director of the Butterfield Bermuda Championship, said the tournament’s affiliation with the customer events yielded benefits including promotion of the tournament, the island and the PGA brand.

“The events are effectively three days of fun, with the golf outing on the middle day, and dinners, breakfasts and galas on the two days either side of it,” Baiunco said.

“In Cayman, we had D.A. Points, a PGA Tour player, join us. He chatted with many of the distinguished guests and was really entertaining. He was stationed at the third tee and hit a shot for every team. He played at the Butterfield Bermuda Championship last year and he’s a great ambassador for the brand.

“The next morning, D.A. spent some private time with some of the executives from Butterfield and gave them a mini lesson. It was great having him there.”

In London, the format for the June 21-23 event was similar. The guest was Dame Laura Davies, the first non-American to finish top of the LPGA Tour annual money list and Britain’s most accomplished female professional golfer. Davies was due to meet the 40 Butterfield clients at the first-night reception, and hold two back-to-back clinics for the guests.

The customer events were Butterfield’s idea, Ms Baiunco said, and the bank’s collaboration with the PGA Tour built on the symbiotic relationship between the two. “It maximises their partnership with the event,” Baiunco said. “They have capitalised on being able to expose the Butterfield Bermuda Championship far and wide in the markets they operate in, which is exactly what title sponsors should do.”

She added that promotion of tourism was a high priority for the tournament organisers — the Bermuda Tourism Authority is the event’s co-title sponsor. “It’s great that the customer events will bring ten winners to the island and some of them could be exposed to Bermuda for the first time,” Baiunco added.

As it is home to the PGA Tour event itself, Bermuda does not get to host a Butterfield customer championship. However, Butterfield does allocate ten slots for the Pro-Am event for guests from Bermuda, joining the ten customer event winners coming in from Cayman and the UK.

And the fun looks set to continue, as the intention is for the customer championships to be held again next year.