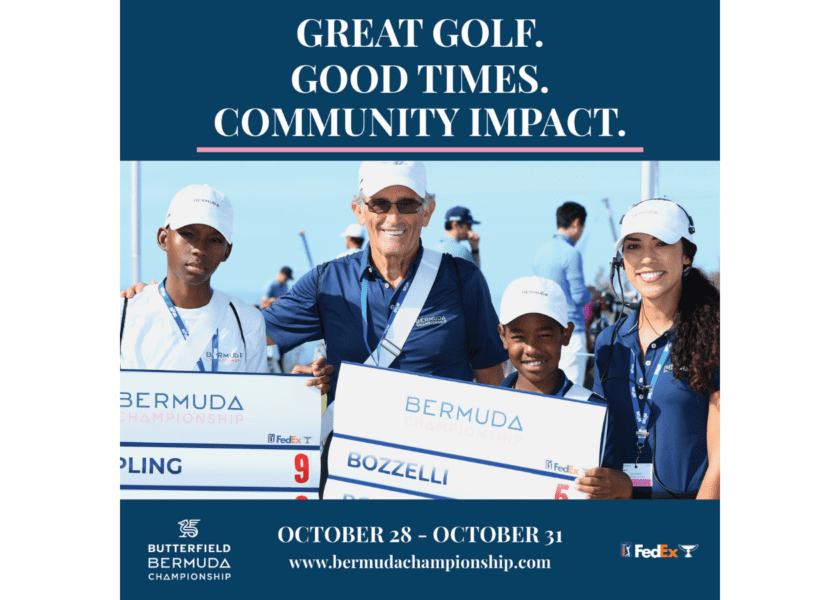 Everything You Need to Know About the Butterfield Bermuda Championship

The Butterfield Bermuda Championship is a world-class golf tournament, but its value to the island goes well beyond sport. The PGA TOUR event, to be staged at Port Royal Golf Course for the third time in October, is also a driver of economic activity, a tourism industry booster and a boon for local charities.

In 2021 organisers want to ramp up those positive impacts to strengthen the bond between the community and the tournament, nurturing a mutually beneficial relationship for the long term.
Danielle Baiunco, operations director for the Butterfield Bermuda Championship, said much has been learned over the past two years when significant challenges were overcome to stage successful tournaments.

In 2019, organisers set up the brand-new tournament from scratch in the space of just four months on the island, with tree damage caused at Port Royal by Hurricane Humberto adding to the challenges. In 2020, even Covid-19 could not stop the show, with the Butterfield Bermuda Championship becoming the first PGA TOUR event to welcome back fans since the onset of the pandemic.

“We tested over 1,200 people and there was not one positive result,” Ms Baiunco said. “It was great, but we did not get the opportunity to dive into the community in the way we wanted to.
“Our overall goal for the 2021 championship is for the community to feel a sense of pride and ownership. We aim to build on our charitable and economic impact every year.”

More than 60 local charities have benefited to the tune of $416,000 from the tournament’s presence over the past two years. Charitable efforts are being stepped up this year through the launch of Birdies for Charity, a programme that also associated with many other PGA TOUR events. Thanks to the support of sponsors led by Butterfield, the programme matches donations up to 10 per cent. Hence, a $100 pledge to a Bermuda nonprofit will result in a total donation of $110. With administrative costs kept to zero, the charity receives the entire amount. About 60 charities are involved in the programme, which was launched in July.

“One day we hope to give millions of dollars back to this community every year,” Ms Baiunco said. “For example, the John Deere Classic, which coined Birdies for Charity, gives back $17 million per year. Obviously, that’s a very different market, but it shows what the programme can do.”
The BF&M Volunteer Programme also makes a significant philanthropic impact by donating $200 to the charity nominated by each person who signs up as a tournament volunteer.

The Butterfield Bermuda Championship works with more than 50 small, medium-sized and large local enterprises. The direct impact from the championship budget to on island business has been over $4.6 million over the past two years.
“We try to keep everything on island and source as much as we can locally,” Ms Baiunco said.

Studies commissioned by the Bermuda Tourism Authority and conducted by KPMG estimated that the 2019 Championship had a $22.6 million economic impact, while the figure for the pandemic-limited 2020 event was $13.2 million.
Additional value comes from the television coverage of the spectacular Port Royal course and the views over Bermuda’s pristine waters.

“The beauty of this island is breathtaking and it looks great on TV,” Ms Baiunco said. “Because of the way the schedule worked out last year, we ended up having over 50 hours of coverage on the Golf Channel.”
The tangible value of media coverage surged to $12.8 million in 2020, up from $3.5 million in 2019. This stimulates the island’s golf tourism product, which is further enhanced by other events supported by the Butterfield Bermuda Championship staff such as the Butterfield Bank Official Pro-Am, the Bermuda Junior Championship and Bermuda Black Golfers’ Week.

More than 550 volunteers, participating in more than 15 committees, gave their time and effort to help make last year’s event happen.
Over the past two years, the tournament has built many local relationships and Ms Baiunco has found that “people are so willing to jump in – we have allies and friends of the Championship now”.

With the cancellation of HSBC World Golf Championship in China, this year’s event, on October 25-31, will be a standalone, the only PGA TOUR event in the world that week. “This means Bermuda has access to the top 50 players in the world, should they choose to come here,” Ms Baiunco said. “That is huge for us. The purse has increased from $3 million in 2019 to $6.5 million this year, the FedEx Cup points are up from 300 to 500 and the field is up from 120 to 132.”
A qualifier event will also give four Bermudians the chance to play in their home PGA TOUR event – last year, there were three, Anthony Phipps, Camiko Smith and Michael Sims.
Ms Baiunco believes the relationship between the Championship and the community is symbiotic. “If the community feels support from us, we can all work together to make this wildly successful from a community, charity and economic recovery standpoint,” she added. “Ultimately, this island is our home and without the support of the community, our success will not be what it could be.”