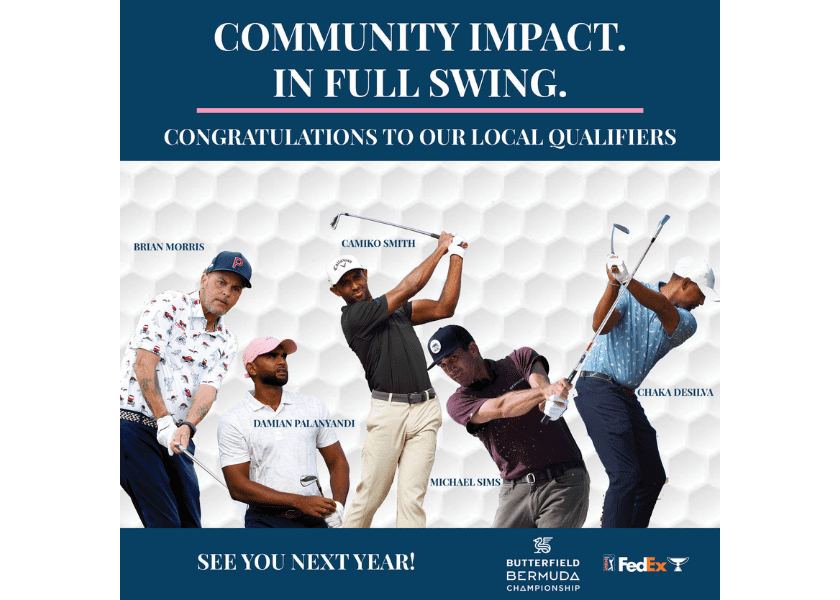 Five Bermudians played in the PGA Tour’s 2021 Butterfield Bermuda Championship – more than ever before. Their presence brought out enthusiastic support from the home crowd and inspired not only the Bermuda community, but also many more around the world.

Youngsters turned out in good numbers to learn from the best golfers on the island, as the local qualifiers – Michael Sims, Camiko Smith, Chaka DeSilva, and Damian Palanyandi, as well as sponsor exemption Brian Morris – led two junior clinics associated with the tournament, each of which attracted 25 budding players.

Such grass-roots inspiration will have a long-term legacy through youngsters who aspire to excel, while Morris’s moving story caught the imagination of the world.

Morris, the 54-year-old professional from Ocean View Golf Club, who suffers from stage 4 terminal brain cancer, received a sponsor exemption to play in his first PGA Tour event after an outpouring of support from the community.

And his story moved none other than Jack Nicklaus, the winner of a record 18 majors, to produce a video of support for Morris that brought global attention to the tournament.

Danielle Baiunco, operations director for the Butterfield Bermuda Championship, said that, while qualifiers were routinely held for other PGA Tour events, often in a place far from the tournament venue, Bermuda’s local qualifier was unique on the circuit to her knowledge.

“This qualifier is only for Bermudian professionals or amateurs to give them the opportunity to play and showcase their skills,” Baiunco said. “They’re an inspiration to the next generation, because kids see them and believe that they too can be a professional athlete.

“The youngsters who turned out for our junior clinics with the Bermudian golfers, people they interact with, in some cases on a daily basis, can look at them and say, ‘wow, they’re playing in a PGA Tour event – we can too’. We’ve seen the impact it’s having on junior golf and we want this to continue to motivate the juniors.”

Sims won the 36-hole qualifying event to make the field of the Butterfield Bermuda Championship for a third successive year, while Palanyandi’s fourth-place finish made him only the second amateur to qualify for the event. While none of the Bermudians made the cut in the Championship, Smith’s back-nine 29 during his second round equalled a tournament record and showed the potential for the local contingent to make an impact.

“Camiko battled out there and he was so close,” Baiunco said. “It’s only a matter of time before one of these guys goes low at the right time and makes it to the weekend – and I think then we’ll see the biggest crowds we’ve ever seen!”

The sponsor’s exemption for Morris came about after numerous requests from the community. “It was crazy how many people came forward to say he deserves this opportunity,” Baiunco said, adding that the avalanche of affirmations for Morris had left the tournament organisers delighted to offer him a place.

“We made the phone call to him as a team,” she added. “You could hear the joy in his voice: he said this was his lifelong dream and he was so thankful for the opportunity.” Morris later described it as the “greatest phone call ever” and said in response to the offer: “I said ‘yes’ real quick and then I said ‘I’m going to cry now’.”

The message from Nicklaus added gave the story global momentum. In his video, the ‘Golden Bear’ told Morris: “While I have heard you are a fan of mine, please know I am a fan of yours… You’ve been dealt a very unfortunate blow. But, as you said, you have created opportunity out of crisis. You have faced this head-on and your spirit and tenacity are truly inspiring. Last year you said, be an example. Well Brian, you are. Good luck.”

Morris’s heartwarming story made ripples around the world, in no small measure because of his upbeat character in the face of adversity. In an interview, he said with a smile: “I’m a year past my expiration date and I’m pretty happy with that.” Golf is clearly much more than a game for Morris, who describes his time on the course as “tranquility for me”. He added: “I don’t feel sick when I’m playing golf. I’m just hitting shots and playing putts and trying to stay out of bunkers.”

Emotions were running high as Morris’s drive from the first tee prompted resounding cheers from his family and fan club, “TEAM MORRIS”, all bedecked in Bob Marley tee-shirts, who followed him all around the course over two very special days.

If there is one takeaway from the Bermudians’ participation at the Butterfield Bermuda Championship this year, it’s that the game of golf and its characters can inspire all generations.