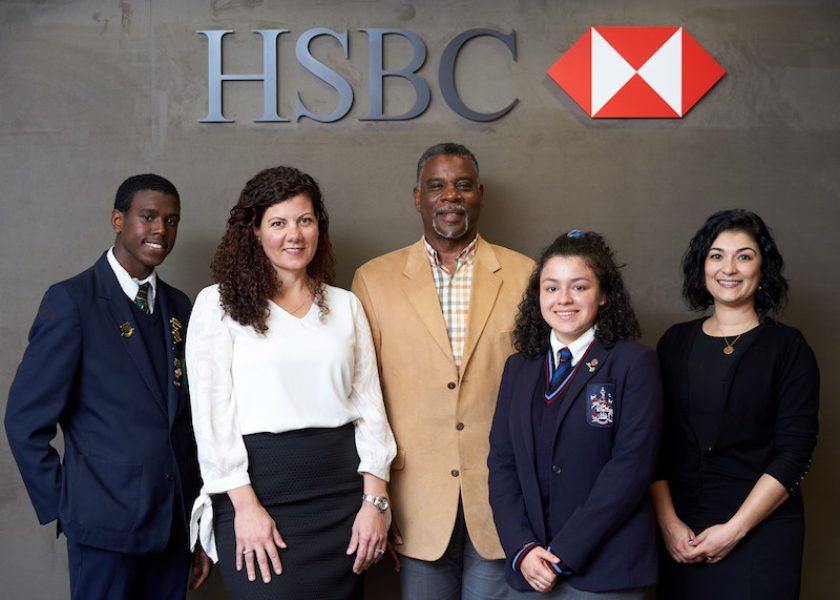 Enabling young people to learn valuable workforce skills and develop an understanding of subjects that are useful in the modern business world are the reasons behind HSBC’s support and sponsorship of a Dynamic Debaters & Learners tournament on the Fintech industry.

After over 3 months of research, learning and practice, 12 senior high school students aged between 14 – 17 years old will come together on Saturday 13 April for a formal debate about the subject of Fintech. The students are all part of Dynamic Debaters and Learners, an organisation founded by St. David’s Primary School Principal, Gladstone Thompson. The debate, which will take place at the Fairmont Southampton, is being funded by HSBC and the bank has also provided mentors to help the students prepare for this event.

“HSBC became a lead supporter of this Fintech debate because we are keen to contribute to developing talent in Bermuda and see this initiative as important in supporting young students and the future workforce,” explains Clesia Pachai, Community Investment Manager for HSBC Bank Bermuda.

“Over the years, we have seen the increasing importance of employment-linked skills development and how new technology and rapid demographic change is exposing those with a lack of financial awareness to wealth inequality,” she continues. “The bank’s aim therefore is to help people in our community to develop the skills for the jobs of today and tomorrow. Dynamic Debaters supports us in this aim because they help young people communicate at the highest level by teaching the art of debate. Excellent communication skills are very much sought after in today’s workforce.”

In addition to sponsoring the event four senior HSBC executives and managers are also mentoring the students by helping them with their research and understanding of the Fintech industry including meeting industry personnel and those in Government who are involved in this area.

“It is important that we help the students understand the topic in greater detail and help to demystify what Fintech is and is not, and the extent of the financial sector’s involvement,” says Cora McLaren, Head of Wholesale Banking at HSBC Bank Bermuda. “There are many misconceptions about this topic and the mentoring programme helps the students ask questions, think about the answers and then come back the following week with more questions.

“HSBC already leverages significant Fintech such as Artificial Intelligence, reconciliation for trade and global market product offerings to support our customers. We are making a sizeable investment in this ongoing innovation globally so we believe that by mastering this debate topic, these young people will have an upper hand in the latest trend and innovation around the globe as well as its implications locally.”

Thompson founded the charity Dynamic Debaters & Learners nearly 20 years ago, but has been involved in debating since 1992 while he was a teacher at the Berkeley Institute. By watching national and international debate tournaments he quickly realised the benefits debating could provide to young people:

“It really inspired me,” he says. “When done well it’s very entertaining and it really reaches the kids in a lot of cognitive ways.” He incorporated debate into his curriculum, turning many subjects into debate topics and very soon Berkeley began to win national tournaments. The children enjoyed it so much that he decided it needed to be shared with everybody.

The primary objective of Dynamic Debaters is to provide an opportunity for students to share their freedom of speech and expression in an open forum, participate in local and international debate competitions and engage in rhetoric on a variety of issues at the local and international level in order to become more active and productive citizens who will one day lead their country.

The youngest children in Dynamic Debaters are nine years old, with the majority of participants being between the ages of 14-18. “There has never been a time when the audience hasn’t been amazed by the Dynamic Debaters kids,” continues Thompson. “Many of the kids go on to do great things and I do believe that it had a lot to do with their success.”

Thompson chose the Fintech topic for this particular tournament after attending a number of Fintech information meetings: “They were always pitched to the adults and this was an opportunity to pitch it to the kids,” he says.